As a follow up to the interview, which LP gave to the RedEye paper, wouldn’t it be great to take a look at the acoustic show she mentioned there? The intimate performance took place at the JBTV studios, where LP was playing her two ukuleles, and Tim Fagan a twelve-string guitar. The sound of the strings of those two instruments combined, highlighted by a great sound quality at the studio, is definitely something to enjoy. 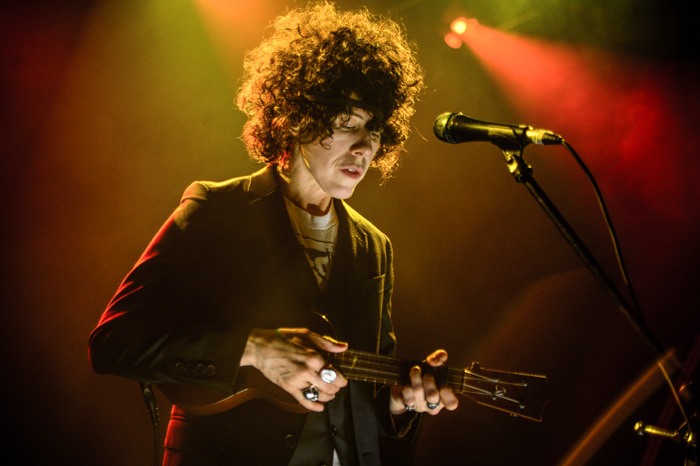 LP at the JBTV studios, photo courtesy of JBTV

On top of playing his beautiful guitar, Tim also supported LP with his soothing, warm vocals. Together, they performed some songs off of the Forever For Now album, and one cover – “Gimme Shelter,” originally by The Rolling Stones.

And about this cover first – that was one splendid performance! Even though The Rolling Stones defined rock’n’roll, the place they come from is definitely something else. Their roots reach into the blues (just listen to their ’63-’65 singles!) and what’s interesting, LP’s JBTV acoustic version highlights these vibes amazingly. Her rendition brings a proper soul groove out of this song. Once again, she proves to have no vocal limits, this time taking her voice into the challenging blues territory. The way she sings the verses, with her low, gritty voice, will put you into a trance for a moment, but then the powerful, dramatic chorus will suddenly shake you up. She’s really engaged, every sound is carefully taken care of, and what strikes us most is the maturity and depth of this performance. Her understanding of what a certain song is, the intelligence behind her singing and arrangement is just impressive. We shit you not, if the Stones saw this performance, they would love it!

The set she prepared for JBTV also consists of another rarity, a song she doesn’t often play live, “Your Town.” It sounds so much better in the acoustic version, so raw and beautifully imperfect, with all the momentum and the icing of Forever For Now stripped off. As for “Night Like This,” its arrangement is ascetic, which intimately displays LP’s voice. The pleasant background of charmingly harmonizing guitars and Tim’s soft voice strongly contrast with her razor-sharp vocals. The tempo of the performance, a bit slower than usual, enhances this effect. And another exceptional part of the JBTV concert is “Forever For Now.” Here we can listen to a rare version of it, played on the ukulele and accompanied by the keys, and the sound is magic. This piano part, played by Isa Summers on the album, is so good! The acoustic rendition of “Salvation” is also a treat, together with Tim’s wonderful guitar solo.

✶ The performance took place in the Chicago JBTV studios in July, 2014.

✶ JBTV Music Television – a weekly 60-minute music television show and longest running music program in the US. It’s based in Chicago and was first aired in 1984. Many famous bands and artists had their first exposure playing for JBTV, including Jeff Buckley. And since he’s one of LP’s favorite artists ever, here’s a video from one of his absolutely stunning performances there (“So Real” and “Last Goodbye”)

✶ Tim Fagan – an American singer-songwriter and guitarist. He was LP’s guitarist around 2014, playing with her during her Forever For Now promo.

During that particular concert every verse she sang resembled a work of art – created, prepared, thought through exactly for that moment. It’s a rarity to see an artist sing with such attention and care. LP was focused on her act exclusively – her emotions, her music and lyrics; she didn’t interact with the public while singing and, strangely, it felt like she had decided to open up this very way. END_OF_DOCUMENT_TOKEN_TO_BE_REPLACED

Watching LP perform at Ace Gallery, you can’t help but think she belongs there. As if it was the most natural and inseparable set up – her, with her Dylan look and elegant, Bowie-like silhouette, the painting, her music, the acoustics of the room.  END_OF_DOCUMENT_TOKEN_TO_BE_REPLACED

While you may think that you already know these songs too well, keep in mind that the sound quality during Spotify Sessions is spectacular,  and also, LP commented on each song a bit with her characteristic swag. END_OF_DOCUMENT_TOKEN_TO_BE_REPLACED