Paris: a labyrinth of avenues, sublime architecture, cafes filled with people having dinner, drinking wine, telling daring jokes, discussing art. Parks and alleys, history just spread across the pavement. Who hasn’t come here to work or to look for inspiration or a mentor…  But while this atmosphere is not really there anymore, at least it’s not obvious, Paris still has this distinctiveness, yet now also intense vulnerability. And we wonder if maybe this contemporary vibe of Paris had something to do with why LP performed an acoustic “Tightrope” so unforgettably, when she stopped there for a moment in late 2016. Almost two years have passed since the video was recorded, but we still remember its very first play just as vividly as then. An open hotel window. The sounds of the street. Black leather jacket. The ukulele and the guitar. Everything’s sort of quiet, focused, calm, and incredibly powerful. 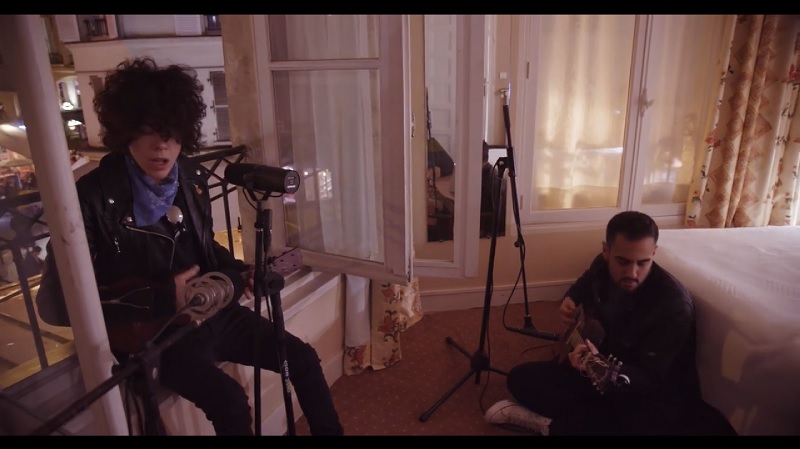 The acoustic version of “Tightrope” from Paris has this intensely hallucinatory effect on us. It’s hardly a new observation that the more LP strips her songs down, the more exhilarating they become, saturated with what seems to be her own laser focused emotion, holding you down and relaxing her grip, in turns, while not even looking at you in the meantime, as for the greater part of this Parisian “Tightrope,” her eyes are closed. And when she does that, somehow the magic sets in, like it did for her terrific performance of “Lost On You” for the World Cafe. So, sitting in this open window, wearing her signature black jacket and a blue scarf, she manages to hit all of our soft spots, all the fears and uncertainties, and make them burn. Is there any hope for rescue in the end, is there any safe harbor in sight? People say they see it there. Maybe it’s there, but you never know. Chances are, there isn’t any. Being this strong and complete performer as she is, she’ll give you no answers nor solutions, dear friend. (There. Now deal with it.) With this acoustic “Tightrope,” more than with anything else, she hangs a mirror in front of your eyes.

This performance seems to us as if it was composed of emotions, in exclusion of all else. Whenever we tried to name the particular means that LP used to make us feel all those things, it all came back to emotion again. Whether it’s her elaborate phrasing, or the way she highlights only those words she chooses to, all that is glued to the emotional content of her ruthless “Tightrope” lyrics. And the phrasing… It’s totally nailed down, so precisely executed that the song, and what it says, cuts to the core. The sound of the instruments, LP’s soft ukulele and JD’s somber but expressive guitar, expose all the edges of her voice and its uniqueness. On top of that, there is this decadent ambiance to the room which is so intense that you can almost see the up-and-coming poet dying of tuberculosis in the next room and his friend, an unfulfilled painter, who lost all faith to ever be anything more, in the other. Paris.

As a composition, “Tightrope” has something always right and faultless to it – minor verse paired up with a major chorus, which is a really powerful way of making a song striking and uplifting times ten. Who doesn’t love this effect? It’s been used in pop music for decades and it never gets old – from Heart’s “Alone,” to Justin Timberlake’s “Mirrors.” And in “Tightrope” it works just as fine. You feel encouraged, lifted, hopeful, however uncertain that things might be, and however the circumstances may break your heart right now. There’s sheer beauty in these contrasting feelings, diffusing, running through, strengthening each other. And you’re then surprised to sense this pinching in your spine, so familiar when you become a little more emotional than you would expect.

Then, when we think about LP singing “Tightrope” during her shows, the song seems to resonate in a different way. The darkness is gone, there are smiles and handshakes, the stage gets overflowed with all these red ribbons thrown from the crowd. Some of the profoundness disappears in favor of a communal experience and a joint prayer for hope and good luck. An interesting switch.

✶ Acoustic “Tightrope” by LP recorded in Paris in November of 2016

✶ The video was recorded in Paris in the late fall of 2016 and was posted on LP’s Facebook page on December 2nd, 2016.

✶ “Tightrope” was written by LP, Nikolai Potthoff and Mike Del Rio and was released on the Lost On You album on December 9th, 2016.

✶ The first live performance of “Tightrope,” recorded by Veronica in the Moby Dick club in Madrid on November 23rd, 2016.

✶JD (J David Carrera) – an American guitarist, based in Los Angeles. JD accompanied LP for over one year, from her 2016 summer European promos and tours, right after “Lost On You” became a hit, through the American part of LP’s touring, up until the end of her 2017 Summer European tour. His distinctive guitar sound and incredible talent for interpretation beautifully combined with LP’s music and the sound of her voice, making many of their performances unforgettable. He used to bring a touch of dreamily profound Gilmour-ish sound to LP’s shows.

The video itself is a treat and we especially like the moment when LP walks the streets of London. She talks about her career and also explains what, in her opinion, is important when you’re a young artist. END_OF_DOCUMENT_TOKEN_TO_BE_REPLACED

But back to “All I Want” and LP’s take on it. It’s no surprise that we love it – LP is an emotional singer and performer, hence the second verse of “All I Want,” that she got to sing, was a perfect choice for her. Especially as for all the lyrical lines, the four she sang were not only the most interesting, but also the most moving. END_OF_DOCUMENT_TOKEN_TO_BE_REPLACED

Lauren and LP did a bit of collaboration on “Sheet Stains”- the sixth song on Lauren Ruth Ward’s debut full length album, Well, Hell (2017). And although she’s not mentioned in the credits, you can clearly hear LP singing backing vocals on this track. Which makes sense – Lauren’s husky color with LP’s shrill yet muffled voice create this sudden juxtaposition, amplified by a looped guitar riff.  END_OF_DOCUMENT_TOKEN_TO_BE_REPLACED