Have you ever wondered what kind of questions Hunter S. Thompson might have asked LP, had she ever met him (not his adrenochrome-pumped version, obviously, but his nice and easy incarnation, shrouded in a haze of cannabis smoke), this is the closest you are going to get (accidently, but still), courtesy of B-Sides’ On-Air show, which LP was a guest of last February. The outcome of the meeting was this short interview that came off as pretty hilarious and mesmerizing (needless to say, never aiming to resemble no gonzo style), and in a flash hopped onto our list of the most often paused videos of the year.

The interview happened on February 11th of 2018, between two of LP’s San Francisco dates from her Winter American Tour. The questions start-off from LP’s private life and go through her then-upcoming Coachella show, then on to her European success, and the “Greek Guy” set of events. While most of that seems like a quite standard list of topics, it’s the way that the conversation went around each of them that really set the uneasy mood of this interview. And don’t get us wrong, the follow up questions, trying to get deeper into the issue, are priceless, and not many journalists even bother to ask them. But in this very case, they come across as hilarious, and when LP helplessly says “I don’t know, man!” it’s one of the many moments that makes this video a must-see. And as for how she handled it in general… well, go ahead and see the video. You will find out that the bowling overdosed will inevitably have to lead to, well, balls…

When you’ll catch yourself rewinding the moment when she says, flabbergasted, “in… Po- land???” for the tenth time, that means you got it.

And by the way, don’t be misled, the beaches in Poland are great (especially in Hel)!

B-Sides: Lost On You is the latest album from LP, who joins us here in San Francisco.

B-S: Thank you for joining us! And for your time.

LP: Thank you for having me.

B-S: I really appreciate it. Congratulations all around.

B-S: For many things.

B-S: Congratulations on your engagement. How was your proposal, was there a big to do or just sort of like a…?

LP: We were in Belgium at the time, I was on tour. It happened first she asked me there, and I asked her when I got home, it was nice.

B-S: Nice, nice. And you have everything already planned?

B-S: Congratulations on that and then congratulations on all the recognition on this album. It’s like year two, almost, of touring on this thing. It’s got to be so gratifying after so many years.

B-S: And also, as we lead up to all this touring that you’re doing, you’re also gonna be playing Coachella.

B-S: How does that feel, to get that phone call?

LP: Great. It’s really nice. I was surprised, you know, in a way. I kinda loose perspective on where I stand in the States, sometimes. I felt good about being included, it’s cool.

B-S: Have you been to Coachella before?

LP: Yes, of course. It’s a great festival. I played so many, that it’s nice to play one in my adopted home-town.

B-S: What I found interesting is that Poland really took to your music, obviously.

LP: Yeah, I don’t think I ever thought I’d go to Poland, I just didn’t think about it. And it’s one of my favorite places, I love it there.

B-S: I figured as a touring musician, there’s got to be something…

LP: Bowling is the last resort for me. I gotta be pretty bored to bowl.

B-S: You have so much time when you’re touring!

LP: I did not bowl in Poland, I did not know that was the place to bowl.

LP: Really? I’ll check it out.

B-S: I talk to many artist and they say that beach bowling is a big thing in certain pockets of Europe.

LP: That’s the last place I would go to the beach. Like… “I really wanna hit the beaches in Poland!”

B-S: But, like, Italy? Beach bowling is big over there.

LP: Yes. They call it bocce.

B-S: So you do know what I’m talking about.

B-S: How good are you in bocce ball?

LP: It depends how much I drink.

B-S: Oh! This way you’re not focused too much on that ball and sorta just go for it.

LP: Yeah. I don’t usually focus on balls at all.

B-S: The legend- I’m gonna let that one just fly right by.

B-S: The legend is that you got this random phone call or some communication from someone in Greece that really loved your music.

LP: It was a very mature thing. It was like, wow!

B-S: And it was real. Did you think at any point that this is scam, this is same as a Nigerian prince with his million dollars?

LP: No, he said something about licensing and I have decent amount of knowledge being in business for a minute and being a writer and all that stuff, but I thought he meant it for a film or television. But I had not got in the habit yet of checking my dms, direct messages. I missed out on a show from not checking them. So I was like, I’m gonna make it a point to check them more often. I checked them and he said, “I  can’t get in touch with your label, can you give me some information, like your manager or publisher?” I said of course. And again, he said he wanted to license it and I didn’t really think of anything. And then my manager… a few weeks later, I said, “Whatever happened to that thing in Greece?” He goes, “Oh, it’s going good, we’re charting in Greece,” so I was like, “What do you mean, charting, what does that mean?” He goes, “It’s on the radio, it’s top 40,” or something like that. It just kept going, going, going. It was in a lot of other countries too, but it was number 1 in that country for almost a year, I believe 11 months or something like that, and it’s been in the top 10 over a year.

B-S: For this particular album you hand-picked a lot of people that you wanted to work with, ‘cause with your last album there was a lot of different higher-ups involved, and you felt maybe it was a little out of control.

LP: It was the no-control-tour.

B-S: “No-control-tour” I think is what you said.

B-S: Mike Del Rio from POWERS, who we know. He came on, we’ve spoken, we really love his work.

LP: He’s great. We did a lot of stuff on the last album, for that last album, that you speak of, the no-control album. It was just commandeered and re-produced. Then I got dropped from Warner Bros. and I got an indie deal, and we’re doing it our way.

B-S: What is it about Mike that brought out the creativity in you?

LP: I don’t know, you know, chemistry is a weird thing. Mike is like my band-band, my home… like my writing-band. I think he just knew how to… He had innate ability to get out of the way of my vocal and my songs. Because I have a strong voice, I think, sometimes, people get very hell-bent on putting a lot of stuff around it, a lot of production. I think Mike had that balance down and I feel very lucky to have found someone… You know, it’s like finding a romantic partner, it’s nice to find a partner in music.

B-S: You both have a weird sense, well, not weird…

LP: You’re both strange! How does it feel?

B-S: Yes, you guys are weird, okay? I don’t know what it is, about your weirdness that I love. But you do have this knack for writing earworms that just stay with you…

B-S: I really enjoy your music.

LP: Thank you very much.

B-S: Like I said, it’s a fantastic album and I can’t wait to see your set.

B-S: Pleasure to have you.

LP: Thanks, I appreciate that. 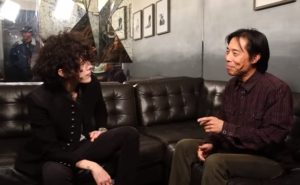 ✶ LP & Poland – LP first visited Poland in the summer of 2016, to sing “Lost On You” at some festivals and for different televisions and radios. Then, in December, she played there two final shows off her Lost In Europe tour, first in Warsaw, then in Poznań. She returned to Warsaw a month later, in January of 2017, for the 3-hours long signing session in Empik, and to play an exclusive acoustic concert at Radio Trójka, preceded by an on stage interview. Her last visit to Poland, so far, has been a concert she played at Life Festival in Oświęcim in June of 2017. (Reflecting on her shows in Poland now, we can’t help but notice that not only each and every one of them was spectacular performance-wise, but also that there was a profundity to them that is hard to explain.)

✶ Mike Del Rio – LA-based musician, producer and songwriter, originally from New York. Together with Crista Ru, he is part of the alternative group, POWERS (and POWERS are THE BEST, just listen to “Man On The Moon” and “Just Kids”, do it now!) As a producer, he worked with Christina Aguilera, Eminem and Kylie Minogue, among others. He is the executive producer of the Lost On You album and, together with LP, he co-wrote “Muddy Waters,” “No Witness,” “Strange,” “Lost On You,” “Tightrope,” “You Want It All,” “When We’re High” and “Long Way To Go To Die.” Before that, they wrote “Night Like This” for the Forever For Now album. The song was eventually produced by Rob Cavallo, though with Mike credited as co-producer. LP and Mike, together with Nate Campany, keep working together writing for LP’s next album, due to be released this fall.

We gave it try and we wrote down the possible lyrics for the song. There are some question marks here and there, so we’re really curious what we’re going to find in the official booklet. If LP ever decides to release it, that is. (And let’s be honest, we never said it if anyone asks, but this song should be out, damn it.) END_OF_DOCUMENT_TOKEN_TO_BE_REPLACED

We’re not exactly into dance or club songs, but back in 2011 there was absolutely no way to escape “I’m Still Hot,” performed by Luciana. Wonderland Magazine described it as a “massive online sensation in the US.” The song was literally everywhere.  END_OF_DOCUMENT_TOKEN_TO_BE_REPLACED

To be perfectly honest, the beginning of May 2017 was definitely not a time when we were expecting any surprises from LP. It was – we thought – her two week break between having just concluded her European tour and the opening of her, much anticipated, American tour. END_OF_DOCUMENT_TOKEN_TO_BE_REPLACED