When asked in January of this year how many songs she thinks she has written so far, LP answered that it had to be probably somewhere around a thousand. (!) At first she was writing for herself, and then there was this period of her being “just a songwriter” for other people for a couple of years, before finally coming back to being her own artist. And around 2011, when she was slowly returning to performing and writing for herself, she got to collaborate with Leona Lewis, a pop star recognized world wide (“Bleeding Love” surely rings a bell), whose debut record earned two Grammy nominations. And quite a fruitful collab it was: two songs cut for two different artists, one lesson learned, plus what turned out to be one of LP’s favorite writing sessions ever.

So, there were two songs which LP wrote for Leona. The first one was written especially for her, but not with her in the room, and this was the song which Leona didn’t cut in the end (but there’s more to this part of the story, just wait a bit…) A few months later, they teamed up in one studio to write another song for her then-upcoming album, and this time successfully: the song “Fingerprint” was included on Leona’s record, Glassheart (2012). And when they finally met, LP asked Leona about the break up she went through. The answer was quite a surprise for LP as a songwriter, and changed a bit of the way she approached writing for others, as she said in the interview she gave to Kiss FM Romania in late 2016:

When I wrote the song for Leona Lewis… it’s kinda funny, because I wrote this song from this perspective of how she felt about her break up, and I was talking to her about that song and I said: “So, you’re really torn up about your break up.” She said: “No, actually it was great, I’m glad!” See? You never know.

On a few occasions, LP said that previously she used to write songs for other artists by trying to work out their perspective on certain things. But after that story with Leona, she “just writes,” almost as if all of these songs were meant to be for herself. She explained it to Fault Magazine in May of this year that earlier on, she tried to make it more I’m writing for this person whom I only know from TV and I will write for them based only on that persona, but now she tries to think in terms of what their instrument offers and where their voice tries to go.

And bringing it back to that song, which didn’t make it to Leona’s album in the end – well, long story short, it got cut by… Cher, and it appeared on her album Closer To The Truth (2013). LP never gave the name of the song, but we guess it must be “Red” (she has two songs on Cher’s album, “Red” and “Pride.”) There probably couldn’t be a happier ending than that for a song, especially from the perspective of a songwriter, who has hundreds and hundreds of songs on their computer, a lot of which to never see the light of day.

The collaboration with Leona was one of LP’s favorite sessions. During SXSW in 2012, she spoke to the Recording Academy / GRAMMYs:

I collaborated recently with Leona Lewis and I really enjoyed that. I don’t know if I’ll get a song with her, but I just think she’s got such a beautiful voice and such deep emotional range that I really enjoyed it. She’s very somber… her music is, she’s not in a real life. And I really enjoy it – writing for a great singer like that.

And so, it’s absolutely clear that “Fingerprint” was tailor-made for Leona. It’s is an emotional, powerful ballad about that one special person being irreplaceable. The melody highlights Leona’s range, exposing her impressive lower register, and is definitely vocally challenging. Leona described the record, Glassheart, as the story of “star-crossed lovers that can’t be together.” Nothing better than concluding this kind of vibe with an LP collab. 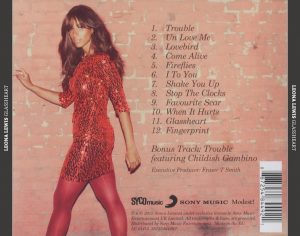 ✶ The album booklet gives the following credits for “Fingerprint”: written by Fraser T Smith, LP and Leona Lewis, produced by Fraser T Smith, who also recorded the piano, keyboard and drum parts. The song was recorded in London and Los Angeles and was released on Leona’s Glassheart album in October 2012.

✶ The Glassheart album as a whole gained rather moderate reviews (while the expectations were high, since Leona’s debut was nominated to GRAMMYs). Nonetheless, “Fingerprint” was one of the songs pointed out as the record’s highlights (BBC Music, Mirror, As Making Paper Airplanes music blog.)

✶ Leona Lewis – a British singer and songwriter, the winner of X-Factor (2006). Her debut album, Spirit (2007), was nominated for Best Female Pop Vocal Performance and Record of the Year at the 51st Grammy Awards. The single “Bleeding Love” became a worldwide hit.  Glassheart was the third studio record released by Syco Music and RCA Records.

✶ Fraser T Smith – a multi Grammy Award-winning English record producer, songwriter and musician. He co-wrote, produced and mixed Adele’s “Set Fire to the Rain” for her album, 21 (2011), which won a Grammy Award for Album of the Year in 2012. He was the executive producer on Leona Lewis’ album, Glassheart, and co-wrote half of the songs that appeared on the record.

Ex Cops’ music is full of contradictions. Sugary vocals mixed with non-random lyrics, the synth-driven sound is vintage yet modern, danceable yet contemplative, pop yet indie. It is reminiscent of various mainstream bands from the 70s, 80s and 90s. Those influences are obvious and there’s no surprise to read what they told to Interview Magazine: “Two of our favorite albums are The White Album by the Beatles (1968) and Michael Jackson’s, Dangerous (1991).” END_OF_DOCUMENT_TOKEN_TO_BE_REPLACED

LP wrote this song with her mentor, Billy Steinberg, alongside Billy’s long-time songwriting partner, Josh Alexander. It could have happened around 2011, when LP was writing songs for her then upcoming record, Forever For Now. They were collaborating extensively back then, as they also wrote “Savannah” and “Salvation” together, each of which made it onto the album (and also “Magic,” which will appear on the deluxe version.) END_OF_DOCUMENT_TOKEN_TO_BE_REPLACED

The video was recorded during the show in Los Angeles at the El Rey theatre, the very same place where LP played her triumphant final show off her 2017 American tour, just three years later. Back in 2014, LP was touring with Kodaline and opening for them, and she would also join the lead vocalist, Steve Garrigan, to sing their hit song, “All I Want,” together. END_OF_DOCUMENT_TOKEN_TO_BE_REPLACED