Walking completely alone along the cliffs with your ukulele in hand and some magical variety of mushrooms in your bloodstream can be quite dangerous. It’s possible to fall hundreds of feet down and crash among the rocks. Or you might just come up with an idea for a song so special that, soon after, it becomes your essential piece and you name your new album after it. Our little planet got lucky, as LP didn’t fall from the cliffs of Big Sur – instead, she wrote “Forever For Now.” One way or another, don’t try this at home (all you lucky people living up there on the cliffs).

This is our attempt at writing about “Forever For Now.” And knowing that, back in 2017, LP called it her favorite amongst the songs she had written doesn’t make this any easier. 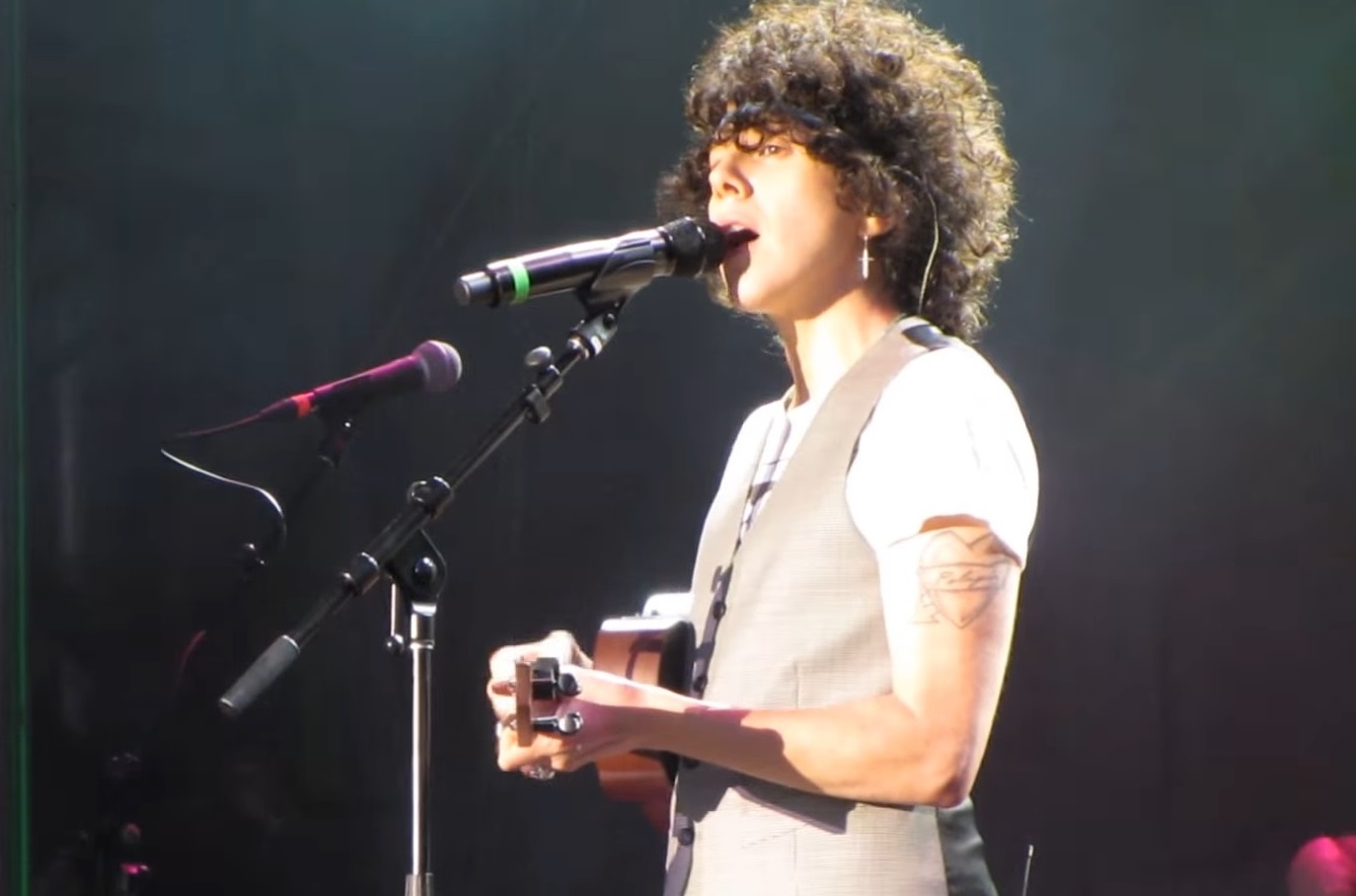 When you play yourself LP’s 2014 album for the very first time, and when you hear its bursting opening track, “Heavenly Light,” it prepares you for everything but for how the album ends: with a quiet, gentle ukulele, tender whistling, and vocals with something inconsolable to them. Only then, after the last subtle notes of this last song, “Forever For Now,” are gone, can you understand that you’ve been taken on a journey. An emotional road trip. And while it seemed like it was going to be pretty casual, light and just an awesome party at first, you suddenly find yourself lost deep in thought, staring out of the window, having a one-on-one with your own self. Which is a good place to be from time to time, to be honest.

“Forever For Now” is such a good title. There is so much poetry to it and it really is the essence of what good poetry so very often is – you could write a full dissertation on the meaning of a single line. The phrase “forever for now,” in and of itself, commands respect. Just in the way it sounds. There’s this interesting twist to it, but it also brings the air of something profound and makes you wonder about the title’s genesis, even more so since LP hasn’t used this particular wording in the song’s lyrics. Actually, that exact phrase was born somewhat by coincidence. Truth be told, to write a song this personal, with all that has already been placed behind it, and to still be able to give it even deeper meaning by adding a title that is just right, but without being too literal, is really something.

LP has told the story of how the song came to life many times, but the most magical, fun and detailed version we’ve found was shared with Sun King Studio 92 during an interview in 2014:

“Forever For Now,” the song, was written up in Big Sur. It’s a very deep song for me. It was written on my mom’s, who passed away (…), birthday. I was very… not in a bad way and not in a sad way, but I felt her around me that day a lot. I was sitting on this amazing, beautiful cliff, literally I was sitting on the rock, like this, and it was thousands of feet down. I was back a little bit, ‘cause I’m a wuss, but I was like “yeah, looks good!” I just had my ukulele and had no phone. I was completely alone, for the first time… I’m from New York and then I moved to LA. I think I hadn’t been without another person within a mile radius of me. There was no one for miles around and it was really cool and this whistle melody came up that’s on that song. I had this movie, “City Of Lost Children,” in my head, I had that scene in “Chitty Chitty Bang Bang,” with the kids all down there, hiding. I don’t know why, don’t ask me why. I was trippin’ on mushrooms. It was nice, it wasn’t like “oh, she’s on drugs!,” it was like, native American, it was great. (…) There was the whole thing, there was a chief in the rocks, my dad was standing behind him, I don’t know why he was behind him… There were little guys in the trees… it was awesome. The sun was shining down on the water and it was making those trails that it does, and I was calling it “Forever.” I was like, “look at forever, showing off over there!” And in the song I wrote this line, “forever,” and then Isa Summers, who was finishing it with me and producing it, she had to put it in the computer. She was like, “what are you calling it?” I was like, “I guess… ‘Forever.’ I don’t really want it to be that, it’s a little generic.” She’s like, “We’ll just call it ‘Forever,’ for now.” And we both looked at each other like… “’Forever For Now!’ Oh! Oh my god!” And then it just kept getting better and better. Every time I say it, I’m like “oh… hmm…” It was deep, but not as deep as… you know, this kind of thing just happens in the studio all the time. Probably some of your favorite songs, meaningful songs, the songs you’ve cried over… the guys were like… his sandwich came in – “Angie! Angie made my sandwich.” (Sings – “Angie, Angie…”) You never know.

That’s the story. It is beautiful and it really doesn’t require any comment. It does make us think about some side topics, though. Well. Magic mushrooms trips. They are one of a kind – you may connect to some shockingly deep parts of your soul, but you may also feel some anxiety, some rave, confusion and, also, peace. When you’re experienced enough you can try and control your trip and let it navigate you through all that’s been puzzling for you, all that is deep within. You can even use the mushrooms for a form of therapy and use them to help in taking care of your yet unresolved matters; the spiritual or simply personal ones. And the coolest part is that you get to remember all of this once you’re done tripping. Not a clue what LP’s Big Sur trip was like, other than what she has described, but to us, the song she started writing there seems like this momentous, otherworldly experience, with each part being more unexpected than the previous.

Honestly, who would have imagined a whistling ukulele opera-lullaby with both the vocals and whistling notes almost impossible to hit. “Forever For Now” is not an easy song to grasp and consciously love, and it probably takes more than a couple of plays to follow the concept. What it is, at first, is pinching, especially if you listen to the album version. It gives you this familiar kind of discomfort, similar to when you were listening to “Bohemian Rhapsody” for the first time, and your brain was baffled and disappointed by not being able to predict what comes next, even though all that you were receiving was incredibly beautiful. And on a personal note, we love our reaction to our very first “Forever For Now” play, almost two years ago. (Shortly before that, the same thing had happened with “Strange,” btw.) It went, basically, “Oh, they hired an opera singer to sing on LP’s record, that’s really nice — wait…”

All that said, we are also pretty convinced that it’s difficult to understand the message and the mood of the song before having heard it live, or at least on the live recording. Then, all at once, as LP sings it, it all starts making sense. One of our favorite performances of “Forever For Now” was recorded during the 2013 Ottawa Bluesfest. It’s so dramatic, played with a full band (now, that’s a rarity when it comes to live performances of “Forever For Now”), and recorded from the audience, but to what effect! LP’s immersion in the song, the way she sang the operatic part, the smoke, wind, drums… So moving and remarkable. Treat yourself.

And here’s one more special performance, from the Lido club in Berlin, our first LP concert. It makes us endlessly nostalgic, not only because most of one’s first times just do that (and nothing compares to this feeling of amazement mixed with disbelief and, well, infinite awe, when you get to hear LP live for the first time, and no, no live videos can prepare you for that), but also because of all the secondary, little things around it. Starting from “come, come, sit at my feet,” through the brilliant delivery of the song, ending on “thank you, Moscow” (we love you, Moscow!) and the fact of how teeny-tiny the club was… all combined, it’s completely another kind of trip.

* well, most certainly, we do not encourage the use of magic mushrooms in any place where doing so is illegal

✶ The song “Forever For Now” was written by LP and Isabella Summers, who also co-produced it and played the keys and the piano. LP played the ukulele. It’s the title track on LP’s record released by Warner Bros. in 2014, which was her major label debut.

This second interview, that we post today, does exactly the same, and it concerns exactly the same subjects. Watching it one after another is the closest you can get to time traveling, a kind of fast forward from August to October.  END_OF_DOCUMENT_TOKEN_TO_BE_REPLACED

Heart To Mouth, a new record by LP – The Experience. Part I.

Zu: Listening to unfamiliar music, as much as it’s thrilling, is demanding, no matter if you like the artist or not. Actually, perhaps all the more so if you like the artist. I guess it’s different for everybody, but when I put a record on for the first time, my head starts to play tricks on me and tries to solve every equation and find the answers instantly, or even ahead of the curve. END_OF_DOCUMENT_TOKEN_TO_BE_REPLACED

The only thing better than listening to “Muddy Waters” is witnessing “Muddy Waters” being played live. Out of the many jaw-dropping moments that go on in the contemporary arts (‘cause they do, if you look hard enough!) this one kind of takes the prize. END_OF_DOCUMENT_TOKEN_TO_BE_REPLACED