We think that, in Croatia, we may have gone a little bit deaf, and even before the first song, “Up Against Me,” came to an end. It wasn’t about the truly impressive sound system that the majestic St. Michael’s Fortress in Šibenik has (respect!) nor about the sound volume. Nothing LP did, either. Well, who could have ever guessed that all these nice people in the audience would turn into some hyped up, screaming and completely out of control crowd of worshippers? Once everybody jumped to their feet the second LP took the stage they never sat down again, throughout all eighteen or so songs. We have never expected that the craziest LP audience we’d find would be in Croatia. 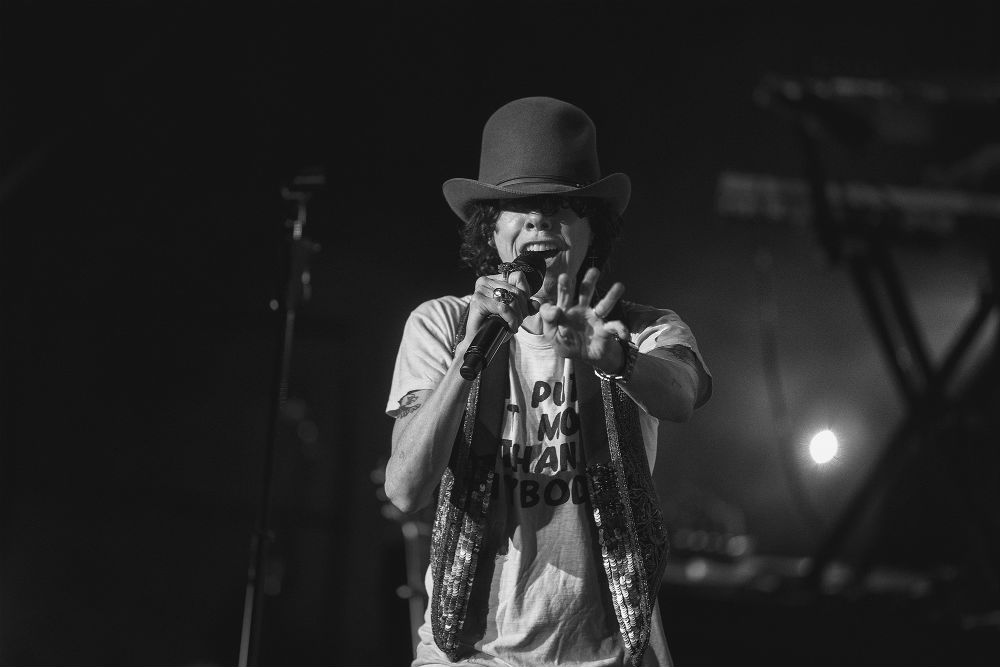 LP in Sibenik © Dunja Dopsaj, courtesy of the author

When you travel down the Croatian coastline from Zagreb to Šibenik, your jaw keeps bumping on the bus floor for pretty much the whole 4-hour-long trip. Driving along the white hills with their sparse trees, you pass hundreds upon hundreds of small islands, dipped in the clear blue waters of the Adriatic Sea. But then a quick reality check at the bus station in Šibenik proves the country is still full of contrast – the stunning architecture of the Old Town neighboring the neglected streets of downtown, and sky-high bills for your lunch while your accommodation costs you close to nothing. And then, also strangely, not much buzz around LP in the Croatian media in recent years, yet – we haven’t seen anything even close to this expressive adoration which we experienced during LP’s sold out show in Šibenik (Sorry, Italy.) And we have to admit that there was something in the air the night preceding the show. Most of the beach bars and restaurants were playing LP’s music or even screening videos of her performances. Getting ready.

There must be something about the way LP reads the audience that allows her to understand what’s going on up there, on the amphitheater’s tribunes, right away. We’ve seen her playing laid-back shows when this is what the audience needed, and we’ve seen her on fire, whenever the crowd was burning as well. And in Šibenik, the vibe was of yet another kind: of a long-awaited thrill. And we must admit that the people who showed up there, and the audience was full, they were prepared. They were singing each and every song (including every verse!) at the top of their lungs.

We love the sensation of excitement that gets us every time, right before the start of the show. There are so many things about LP’s presence on stage that make each of her shows a separate, singular experience. It’s a delight to see her perform. Every. Single. Time. One thing is that she has written all these excellent songs. But in LP’s case, apart from the songs, what you go to her show for is to see this stunning performer live, in her element. To let her shock you, yet again, with the might of her voice, her confidence, one of a kind timbre and this particular smoothness. The things you start missing the moment she leaves the stage.

Her opening song of the summer tour, “Up Against Me,” set the tone for the whole show, with LP’s on-stage swag, flawless vocals and amazing arrangement, flavored with the visuals displayed on the screen behind her. Sure the crowd was hers from the first seconds, but you should’ve seen them (and her) at “…just come on over…”

Seamlessly, she moved on to “Other People,” the song as equally seductive as the opening piece, but in a low-key, lurking way. As for the guitar, we’ve always been huge fans of JD Carrera’s soulful sound and we miss him terribly, but we have to give it to LP’s current guitarist, Alex Feder – his sound is distinctive, too. We loved the way he played the solo in “Other People” in Croatia, adding another element of discord and wrath to the song’s message. It felt as though LP used that for her interpretation as well, and there was something even more dire to her nonchalant vocals, something of the kind of thing that makes your heart act weird.

While we are at it – it’s interesting to see how LP’s band has changed musically during the time we’ve been lucky enough to watch the process. From the sophisticated, jazzy, spatial sound of Matt Mayhall’s drums combined with JD’s delicate, romantic, weeping guitar to Eli’s strong pop beats corresponding with Alex’s rock ‘n’ roll, mad way of dealing with his strings. Together with that, the vibe of the smoke-filled, cramped jazz café in Copenhagen evolved, sound-wise, into a big, stadium-like landscape. Quite a journey. Following alongside the sound, the show’s production is also getting bigger and bigger, experimenting with either bespoke lighting or visualizations (or both). Only in Šibenik did we have the opportunity to see the show together with the visuals designed for it, and the two of them were just beautiful – one prepared for “Death Valley” – playful and crisp in its macabre overtone; and one for “Suspicion” – boldly straight-forward, tied to the song’s message and, as such, even more powerful.

The Croatian show proved one fascinating thing to not only still be true, but also getting stronger. We swear that we became actually, truly addicted to two songs, and there is no prospect for recovery. “Suspicion” and “Girls Go Wild”; they perform some chemical tricks when sung live, and then they haunt us for hours and hours after the show. And LP sings them as if they were two effortless little songs, not some crazy difficly passages, twirls and curls that at the same time are catchy as fuck and so you’d sooner go mad than manage to get them out of your head – good luck with that.

We are forever grateful to the engineers behind the fortress’ sound system – it allowed us to closely hear the most beautiful drum arrangement to the “Dreamer” verses. Especially the first one, when Alex’s acoustic guitar goes silent and LP starts singing, accompanied by Eli’s delicate, subdued drum. LP has this enigma in her voice and, whenever she wishes to, she can become quite intense about highlighting that. Most often, she seems to be taking delight in doing so for the beginning of “Muddy Waters,” but in Šibenik it also happened for the first verse of “Dreamer.” The opening part was nothing short of an interpretative masterpiece, so powerful that it managed to silence the zestful audience for a couple of minutes.

Sung at the end of the main set, “Strange,” was as impressive as always, vocally just unbelievable. But, ha! there was a treat at the end, an additional harmonica solo! It’s always fun, this part of the show: the solo, the flip, the throw. But this time, because of this second solo, we actually listened to the harmonica’s sound. Emotional, focused, yearning. Really noticeable. Wouldn’t say no to more.

The golden nugget of the second part of the show, “No Witness,” would usually be the song that brings down the house, but in Šibenik, by the time LP got to the piece, everybody had already been driven crazy for quite a long time. So you can imagine what happened when the first notes of “No Witness” blasted over the fortress… Well, we stopped hearing the vocals or the music or our own thoughts – there was only this thunder of a thousand voices, singing out their love for LP. Usually managing to keep apart from things going this communal, this time we were immersed in this joint celebration, too.

It’s hard to believe, or to describe, how very different LP’s shows can be in themselves. From raw and focused to anthemic and celebratory, and the whole palette that sits in between, in the course of just one tour. You never know what will lead the way for you, and it’s never what you expect, so we’ve learned not to guess, not to anticipate, but to let it flow. And in Croatia it turned out to be the synergy between LP and her audience, the most vibrant we’ve ever witnessed. This kind of ambiance added some well-fitting background to LP’s songs and highlighted this special shade of sincerity that LP delivers. Heart to mouth, no doubt. We left St. Michael’s Fortress intoxicated with all this, filled with emotions and happiness. And everything. 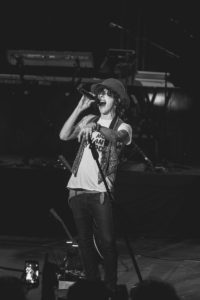 LP in Sibenik © Dunja Dopsaj, courtesy of the author

✶ Matt Mayhall – an LA based drummer, composer and session musician. He released his debut album, Tropes, in November, 2016. He played in LP’s band in 2015/2016. Their last cooperation was during her Lost in Europe tour in Nov/Dec, 2016. His distinctive style is very accurately described by NYC Jazz Record review: “Matt Mayhall is a very self-effacing drummer – no solos but crisp and subtly propulsive throughout. Tropes […] deftly combine cinematic shadings, baroque dynamics, themes of progressive rock and classy, fluid improvisational nature of jazz. Rockers might say it’s jazz, jazz fans might call it rock […].”

On his page you can listen to his entire album and it’s a MUST – he’s GREAT!

✶ JD (J David Carrera) – an American guitarist, based in Los Angeles. JD accompanied LP for over one year, from her 2016 summer European promos and tours, right after “Lost On You” became a hit, through the American part of LP’s touring, up until the end of her 2017 Summer European tour. His distinctive guitar sound and incredible talent for interpretation beautifully combined with LP’s music and the sound of her voice, making many of their performances unforgettable. He used to bring a touch of dreamily profound Gilmour-ish sound to LP’s shows.

When we look one year back, we clearly remember this vibe, this magical tension hanging in the air. People were impatiently looking forward to LP’s 2017 American tour, and the closer it got, the more this impatience showed. Several days before the first concert LP rocked three major American late night shows. Her performances on Jimmy Fallon, James Corden and Conan turned out exquisite, and won both the critical acclaim and the admiration of newly entranced fans. END_OF_DOCUMENT_TOKEN_TO_BE_REPLACED

Sounds pretty standard, doesn’t it? But it sure wasn’t – at World Cafe LP gave one of the most stirring interviews ever, and the way she sang “Lost On You” there remains one of her best performances. The host, David Dye, did an excellent job, just as a prominent music journalist would. He was prepared, he knew exactly what he was talking about, and you could tell he knows the music business inside out. END_OF_DOCUMENT_TOKEN_TO_BE_REPLACED

So, “Black Dog.” After watching “LOY” and “No Witness” at Jools, followed by ITV’s “LOY” again and “Halo” we were, like, “…ok, how about watching a little ‘Black Dog’ by her?” So we did. And after we saw it, we knew it’s something to write about as our next material for you.  END_OF_DOCUMENT_TOKEN_TO_BE_REPLACED