If you think you know all about LP’s whistling, you may be right. Or not, actually – depending on if you already know the video we have for you today. Apparently, on September 16th, 2015, LP was invited by the band, JR JR, to perform with them at the Conan O’Brien late night show. 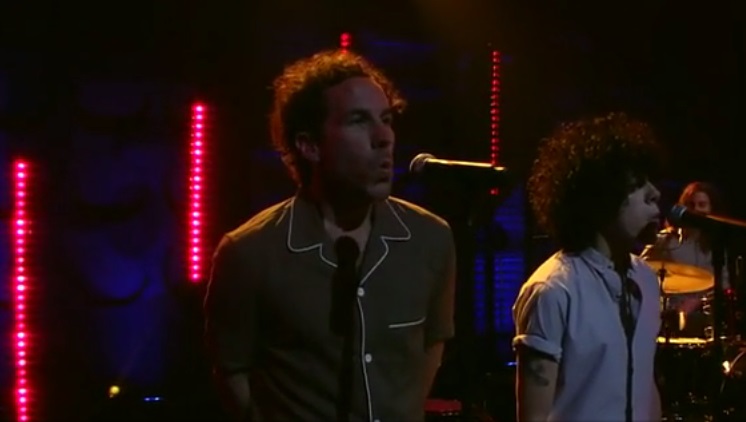 She performed the most catchy element in their song “Gone” – the background whistling. We probably don’t have to explain that she nailed it and simply whistled it like a whistling angel.

JR JR is an indie band from Detroit, formed in 2010 by Daniel Zott and Joshua Epstein. The band was formerly known as Dale Earnhardt Jr. Jr.. They renamed themselves to JR JR in July, 2015, and one day later they released their new single, “Gone.” A year ago, LP placed one of JR JR songs, “In The Middle,” in her Current Mood playlist on Spotify. The playlist is still available on her Spotify account.

Just like LP once pointed out, there has probably been almost as much written about her whistling as about her voice. In the interview, given to Straight Magazine back in December of 2016, she said:

I think that whistling is some kind of a lost art. When I was a little kid, there was this happy guy who was cleaning our school each and every day. He was whistling like a bird, you should have seen him, he was the cutest. I really liked him a lot, so I got inspired by him.

LP calls herself the most annoying person because, as a compulsive whistler, she never stops doing it. Also,  she whistles a lot while she’s composing. Sometimes that’s her first attack on melody when she’s writing – she would play something on the ukulele and whistle.

The very first song in which LP used her famous whistling was “Into The Wild.” She often says she treats it as another instrument that runs parallel to her thought, like in the interview she gave to Red Eye in 2014:

What I like about it was when I’m whistling and I’m playing chords or whatever, and… it comes from some part of my brain that I’m not paying attention, and some really interesting stuff comes out. Like, the “Into The Wild” whistle, I wasn’t, I was zoned out, playing the chords. (…) You don’t think about it all and it’s just something that’s coming out of your subconscious, in a way.

She also refuses to accept whistling and ukulele as gimmicks in her music. “I just use them unabashedly,” she said to BBC earlier this year.

Getting back to the video and the performance of “Gone” with JR JR for Conan – it’s simple, it’s fun and it’s as sweet as only it can be, we promise. Check it out!

Thank you, Anna Nowok, for sending us the link to this video back in January!

It’s peculiar, the way we came across The Mars Volta. It was some ten years ago, on some old pen drive of unknown origin, when we found an mp3 off The Mars Volta’s second album, Frances the Mute (2005). The music got our attention right away. Quite likely, the way the band loosely speaks with the early work of Pink Floyd did the trick.  END_OF_DOCUMENT_TOKEN_TO_BE_REPLACED

We had to see it again, and then another time. First, LP sings the song, but plays the guitar as well! We don’t think we’ve ever seen her perform “Halo” with a guitar elsewhere. And we’ve missed that small Martin guitar, and its distinctive sound, ever since LP replaced it with a different one earlier this year. END_OF_DOCUMENT_TOKEN_TO_BE_REPLACED

Watching LP there is a real treat, ‘cause we get to see a real chameleon – she enters the stage totally laid-back, joking with the crowd, then she becomes focused and serious during the interview, to come back to a relaxed and cheerful mood for the rest of the show. It’s easy to spot her “I feel at home here” aura, as she’s talking a lot in between songs without the risk of not being understood.  END_OF_DOCUMENT_TOKEN_TO_BE_REPLACED