We have to admit, LP’s “Halo” from EastWest Studios, although admired by so many, is not our favorite rendition of this song by her. But it’s not that we don’t like how LP sings this song in general. It’s just that this particular performance is for some reason too loud, too long, too… something. But really, getting things straight – it’s only about who prefers what within this universe of one ridiculously amazing voice. And so, when we bumped into quite another version of her “Halo,” from Italian Radio Kiss Kiss, we were truly surprised and probably a bit stunned, too. 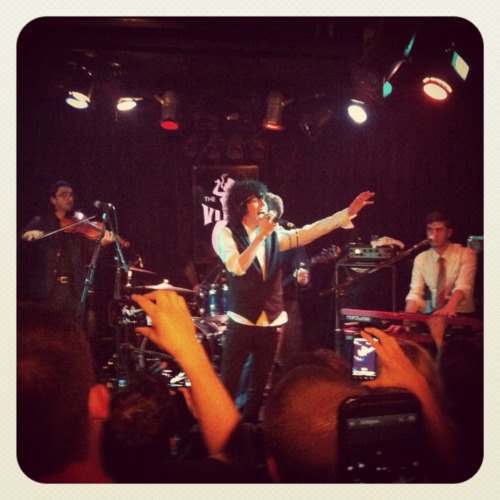 © Glory Gale, courtesy of the author and Alex Jeffries

We had to see it again, and then another time. First, LP sings the song, but plays the guitar as well! We don’t think we’ve ever seen her perform “Halo” with a guitar elsewhere. And we’ve missed that small Martin guitar, and its distinctive sound, ever since LP replaced it with a different one earlier this year. Secondly, she’s accompanied by Trevor Menear, with his melodic guitar sounding so tenderly here. We love his part, especially that – although he is remarkably talented – the way Trevor used to play LP’s songs is sometimes a bit controversial for us in terms of the arrangement. But not this time, he simply nails it here. It’s such a pleasure to watch them play together. Vocally, she takes your breath away, not only with her power, but probably even more when she sings in low keys. It’s gorgeous how she sang this part:

She made every ending of each line so fine that we rewound those ten seconds several times for this elusive state of mind: fairy lights, embroidery, sublimity. And when you immerse yourself into the song, after about half a minute you can almost forget that, in fact, it’s the three of them in front of the mic: LP, Trevor, and a radio host squeezed in the middle. 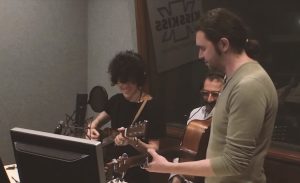 Nature needs balance, though – hence yet another spectacular “Halo” by LP, with no fairy lights whatsoever. Instead there are pyrotechnics, fireworks and, pretty much, human cannonballs, let’s just say that. Because what else can be said when LP gives a show off performance with a song that challenging, beer in hand, vocals on command. Lucky people in The Viper Room who got to witness that jaw dropping performance in person. As one of the reviewers said: She smiled, and then giggled, and then tore the house down. You ready?

✶ ”Halo” is a song written by Beyoncé, Evan “Kidd” Bogart (Britney Spears – Love Me Down, Madonna – Ghosttown) and Ryan Tedder (Bleeding Love – Leona Lewis, Apologize – One Republic). It was nominated for Record of the Year and won Best Female Pop Vocal Performance at the 52nd Grammy Awards. The song was the fourth single off of Beyoncé’s famous album I am… Sasha Fierce (2008).

✶ Review of LP’s performance at The Viper Room, by Alex Jeffries

✶ Trevor Menear – an LA based artist, singer-songwriter and guitarist. He played with LP in 2015/2016 as her guitarist and supported her as backing vocalist.
Click here for Trevor’s page.

Lauren and LP did a bit of collaboration on “Sheet Stains”- the sixth song on Lauren Ruth Ward’s debut full length album, Well, Hell (2017). And although she’s not mentioned in the credits, you can clearly hear LP singing backing vocals on this track. Which makes sense – Lauren’s husky color with LP’s shrill yet muffled voice create this sudden juxtaposition, amplified by a looped guitar riff.  END_OF_DOCUMENT_TOKEN_TO_BE_REPLACED

Or, often, we read… Oh, we love us a good written LP interview from time to time. And this BMI interview we have here is really well done, and it’s all about songwriting, so how could we possibly resist. LP is really generous in sharing insights about her craft here. END_OF_DOCUMENT_TOKEN_TO_BE_REPLACED

SHE RAISED THE SKY OF OŚWIĘCIM

Knock, knock, knock! Guests are there!
Gate, open up to welcome them!