Today’s the day – over a month after our last LP show, we have a bunch of memories from Gardone Riviera, where LP took the stage of Anfiteatro Vittoriale in the most unexpected way, which changed the chemistry of the air over Lake Garda. Or was it because of all those stunning pink flowers which festooned the alleyways and buildings of this charming town? We still don’t know, but here’s what happened. 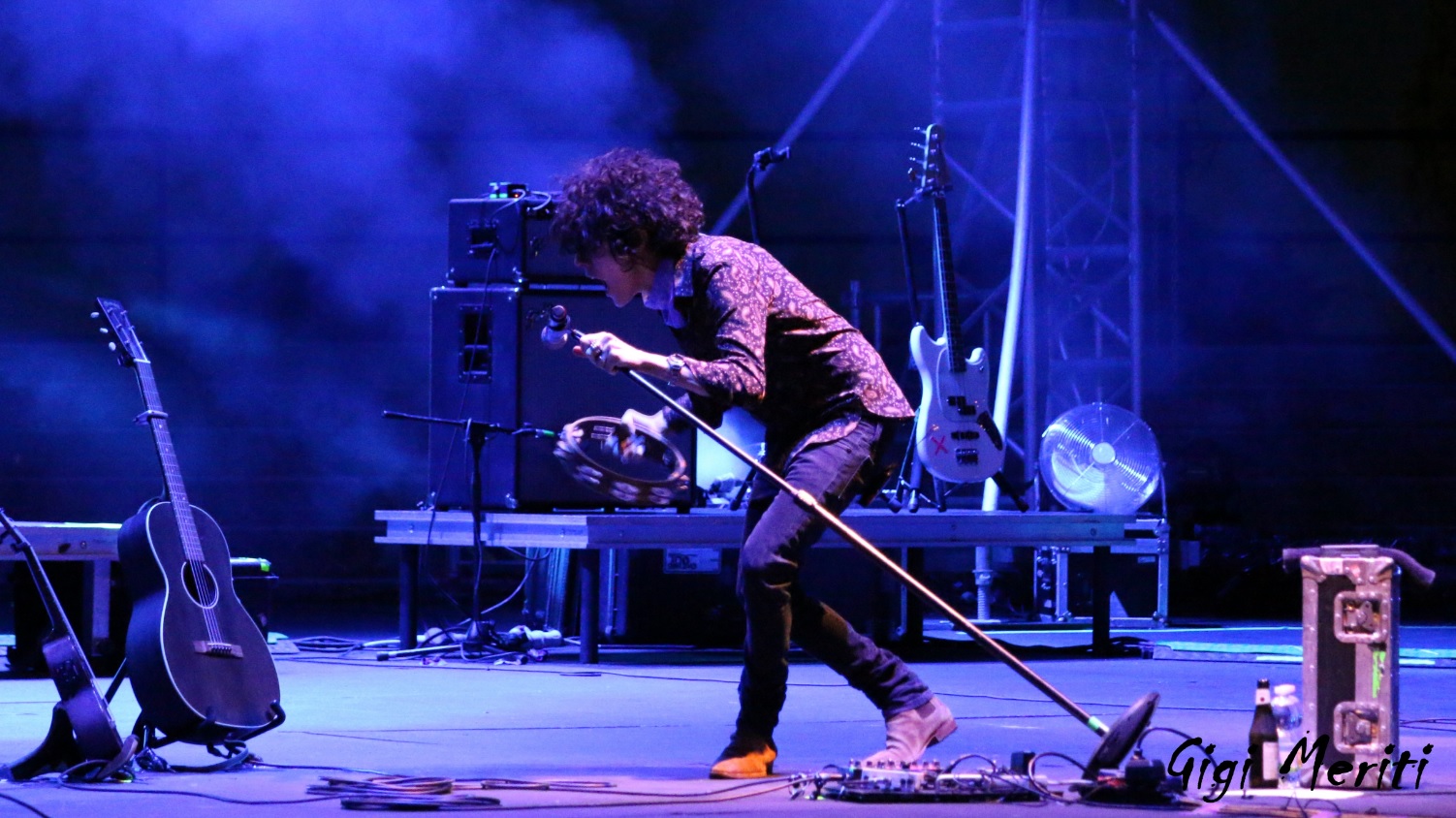 Oh, you Italians! You are one of a kind. We don’t always follow your complicated way of narrating a story or giving directions, and you embarrass us with your amused gaze when we order our cappuccino in the afternoon. (Sorry for that, we need it.) But the ways of your musical culture and refined manner of appreciating it, as if it is just natural and instinctive for you, gives us shivers every time. Chapeau bas. Do you have a bit of Italian for “chapeau bas”?

Heading to Gardone Riviera, we were somehow restless and also excited, but in an odd way. Firstly – it was the last LP concert we were going to see before, only god knows how long. Secondly – Anfiteatro Vittoriale. The venue that caught us totally defenseless and made us buy tickets the moment we saw pictures of it, no matter what, just like London’s Koko did. Strange. But we obeyed, naturally, for what else could we do?

One way or another, something made us feel that this was going to be a very special concert. And indeed, it did turn out to be an extraordinary night, thanks to the soft and nostalgic LP, fairy-tale stage set-up, and those Italians we already mentioned. It felt like home and like a proper goodbye to this unearthly adventure, for now.

Once it got dark, the amphitheater, located on a hill overlooking Lake Garda, and the mountains surrounding it had shown their full beauty. The distant lights illuminated a gigantic monument of a blue horse by Italian postmodernist, Mimmo Paladino, and the trees surrounding it. We were seated at the lifted, semicircle-shaped part of the auditorium, with a view of the rows of seats on the ground level, fabulously spotlighted by the stage reflectors. What we were looking at seemed to be a scenography for Shakespeare’s “A Midsummer Night’s Dream,” not a rock show set-up. Maybe the nearby Verona added to the effect. But then again, maybe it was the wine. Anyways, we were kind of expecting LP to enter the stage riding a unicorn.

We’ve never seen her deliver this kind of stage mood before. Her performance seemed to be in harmony with the unusual character of the venue, very much dreamy, delicate, almost poetic. She flavored it with intense accents here and there, making us admire her excellent ability to drag the audience mercilessly through a full palette of emotions. But she kept coming back to her low-key way of singing, which highlighted the story-telling side of her songs. “Other People” got a completely new life that night. Writing about her concert in Oświęcim some time ago, we took the liberty of saying that “Strange” was a way better choice for second song. Well, we stand by that, but the show in Gardone was closer to a poetry reading (and fine poetry it is) than to a big rock concert, and it worked to the benefit of this song. For some reason, in Gardone, LP put the stories first; through “Muddy Waters,” “Other People,” “Tightrope,” “Up Against Me,” and “Strange,” she told us a tale of darkness, despair, heartbreak, revenge, insecurity, hesitation, hope, desire, happiness, acceptance and friendship. As she said between songs, Gardone Riviera was the home of the great Italian writer, Gabriele D’Annunzio (who died in 1938, as we learned soon after, thank you!…) and maybe his spirit had something to do with that mood. As much as the man who wrote “Triumph of Death” could inspire anything that beautiful… Well, anyway, LP is an exceptional lyricist and, at the same time, an exceptional live performer. Usually it’s not possible to focus on the lyrics, her presence demands all your attention. But this time it was the opposite, the stories ruled the stage, and it didn’t matter at all what the actual events behind them were. We were lucky to witness her side as a writer, as she is a writer first and foremost.

Still, we can’t gloss over the most memorable moments of the concert, performance-wise. While she was singing “Muddy Waters,” an unexpected thing happened. Just before the bridge, when singing “falling… falling… falling…” LP grabbed the mic stand and slid down, also adding some extra notes to this part. Not a big deal, but what a moment it was. We were amazed and also very much surprised to see we weren’t the only ones. The whole audience was in awe and we witnessed it again: the spontaneous applause in the middle the song, as if we were watching some opera, not a rock show. For the encore, we ran down the auditorium stairs to listen to the final songs at the rear of the ground level. This is when the atmosphere of the audience hit us yet again. People got up for “Forever For Now.” And again, the applause exploded twice during the song, to show her the highest admiration for her skills and talents. This performance cumulated so many emotions that they had to be unloaded somehow, and it happened indeed – “Into The Wild” got people screaming and dancing, cheering and singing. Italy. Italy. What a magic place you are.

And there was another beautiful aspect to this show. LP often says how important the communal experience of her shows is to her. Those barriers between the stage and the audience ruin it for her (we hate them as well), she loves the eye contact while she’s performing, as do we. She also says that if people enjoy the show, she wants to enjoy it with them, be close to them, feel the vibe with them. In Gardone Riviera, we could actually see the beauty of this connection. Anfiteatro Vittoriale is an amazing venue, but the audience is seated and there’s a pretty vast space between the stage and the first rows. It takes away a great deal of the energy coming from the audience. And so after awhile she couldn’t stand that distance any longer, and she kept coming down from the stage to us – to say hi, to touch our hands, to look into our eyes. We were on the upper level of the venue, so we had no chance for any of this, but thanks to that we could see her not caring about some fans taking it too far, not caring about the lack of security around her, not caring about these kinds of things at all. She went into the crowd as if it was 2012, not 2017, as if it was Bardot, not a 1,500 person venue in Italy. It was absolutely moving, almost spiritual.

There was something in the air there that made her songs seem as if they were played a bit slower than usual, although they weren’t. Something was different, she was different. This contemplative atmosphere was like a fog rolling in from Lake Garda, surrounding us for the whole show and making it majestic. You could see it clearly during the instrumental solos, when instead of coming near JD or Brian and playing with them like she usually does, she was walking the stage alone, as if lost in thoughts, meditative. What added another accent to the atmosphere was the way she approached her most powerful songs. In singing “Tokyo Sunrise,” she joined her audience and sat on the stage for a minute or two, giving us the most tender version of this ultimate love song. And when she started singing her masterpiece, “Suspicion,” she immediately took us back to another one of the lake cities, Geneva, where she premiered it back in April. She started singing with her right hand close to her face. She doesn’t do that often, but she did in Geneva, and she did in Gardone too. This little gesture, together with her tense silhouette, is one of the most powerful things we ever saw on stages anywhere. Whenever she does that, she takes no prisoners.

What do you do after a show like this? What can you possibly do? We still don’t know, but what we did was we went down through the village to Garda’s shore, in order to search for some good wine, only to discover, once there, that we had to climb all the way back. And so we did. Intoxicated by the smell of the unreal pink bougainvillea flowers, wrapped in this Garda fog, we sat down in a bar and ordered whatever they had there. We tried to pull ourselves together after the show was over, but couldn’t. It was all over way too soon. And so we sat there quietly, catching the last threads of this divine midsummer night.

Swift as a shadow, short as any dream;
Brief as the lightning in the collied night,
That, in a spleen, unfolds both heaven and earth,
And ere a man hath power to say ‘Behold!’
The jaws of darkness do devour it up:
So quick bright things come to confusion. **

Take your earphones, close your eyes and fly away. END_OF_DOCUMENT_TOKEN_TO_BE_REPLACED

Lauren and LP did a bit of collaboration on “Sheet Stains”- the sixth song on Lauren Ruth Ward’s debut full length album, Well, Hell (2017). And although she’s not mentioned in the credits, you can clearly hear LP singing backing vocals on this track. Which makes sense – Lauren’s husky color with LP’s shrill yet muffled voice create this sudden juxtaposition, amplified by a looped guitar riff.  END_OF_DOCUMENT_TOKEN_TO_BE_REPLACED

The acoustic version of “Tightrope” from Paris has this intensely hallucinatory effect on us. It’s hardly a new observation that the more LP strips her songs down, the more exhilarating they become, saturated with what seems to be her own laser focused emotion, holding you down and relaxing her grip, in turns, while not even looking at you in the meantime, as for the greater part of this Parisian “Tightrope,” her eyes are closed.  END_OF_DOCUMENT_TOKEN_TO_BE_REPLACED