Oh, those first times… They are one of a kind. It’s a peculiar feeling, writing down the impressions from our first LP concert. We browse through the memories and try to remember what she sang, what she said, and what happened on stage. Good luck with that. Berlin, Lido club. The first live LP show of many more to come (but we didn’t know about that just yet.) We sort of sensed it already, right then and there, but it’s also nice to be able to tell it now: Yes. I would never be the same. And who doesn’t like to say to themselves – I was right? 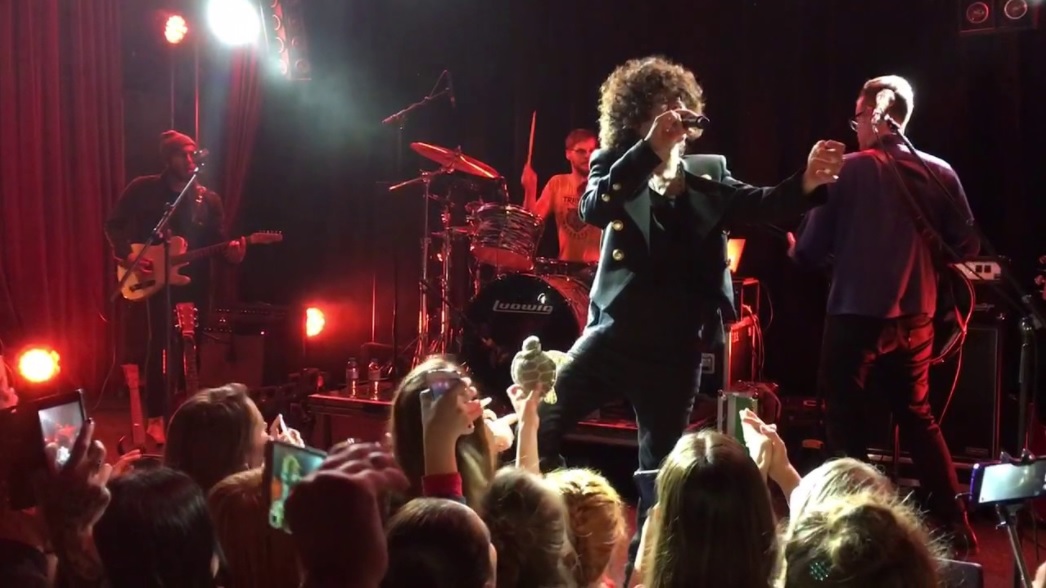 Still frame from the video recorded during Berlin concert

A year is such a long time, and yet so short, no more than a moment. But in LP’s career, it’s forever, and we understood that right after we played ourselves the Lido show today. We only wanted to watch it to structure our story, yet it turned out that it wouldn’t be any of those “song-by-song” concert stories. It’s a story about evolution instead.

It’s so easy to forget how things looked when LP’s career in Europe had just begun. It was all so different, she was so different, and her audience was different as well. Now it’s all so intense, yet relaxed. The Lost In Europe tour in November and December of 2016 was the very first real European tour for LP. And it was her very own tour, with bands opening just for her, not the other way around as it had often been before. So, kind of a first time for her, too.

And you can tell. When you watch the show, remembering her recent performances, you can’t help but notice that she was a bit more reserved back then. The Lido concert  had only a light touch of today’s show-off rockstar element (just look at how she played “No Witness” back then, it’s so civil and low-key in comparison to how she performs it now!) It’s not about LP’s self-confidence, at all, not to mention her vocal skills, but rather it’s as if she acted as a careful observer of the situation, as if she hadn’t yet fully embraced either her success in Europe or the fact that all these people had travelled from different parts of the continent especially for her. They knew all of her songs, not only the hit song “Lost On You,” or even just the songs from the EP and her previous record. It was so sweet when she apologized in Lido, before singing her unreleased song, “Dead Town,” saying “You don’t know this one, sorry” but right after the first verse she exclaimed, very much surprised: “You guys know it!! Nice!!…”

It was in Lido where we experienced LP’s operatic voice live for the first time. The high notes took our breaths away, we didn’t expect anything close to this, in any way. Firstly, there was “Strange.” LP’s EP, Death Valley, had been released a couple of months earlier, along with the studio version of this song. If you listen carefully, you can indeed hear her singing exactly the same melody as she sings live at the very beginning of “Strange,” but on the recording, this part is placed in the background, definitely not something that catches your attention right away. Hearing it live for the very first time in Lido was, to be honest, shocking.

All the songs we heard in Berlin were much more raw in comparison to how LP sings them now. It’s only natural they got polished, especially after the hundreds of performances she played over the past year. Back in 2016, she was trying different things with adlibbing, she was searching for the best way to sing “Tightrope” and “No Witness.” What a treat to listen to the early live versions, when she was likely still rehearsing them. Also, that night we fell in love with LP’s rendition of “Halo.” We knew her performances of this song from EastWest Studios and other recordings, but we never particularly liked it. In Lido we changed our minds. We became bewitched.

When the concert was over, we instantly knew it was the best show we’d ever seen. For the first time, we felt the unearthly power of LP’s vocals. But we also came to understand what she meant by saying that the connection with people, those who come to see her perform, is the most important part of the show for her. Oh, we did feel close to her. She was truly magnetic. She maintained eye contact with the crowd at every moment, she talked to us from the stage a lot, she approached those who reached out to her to say hi. In May of 2017, DIVA magazine wrote that witnessing LP’s show is kind of a religious experience. Hard to deny that, however weird it may sound.

But see for yourself. Just, simply, make time for this concert, it’s a must.

Encore:
Forever For Now
Lost On You

LP tells the story of getting involved in a bar fight, and gives us some insights on how she wants us to feel about her whistling. The interview was conducted during LP’s 2-weeks promo radio tour on the East Coast in the US. As always, you will find a transcript we prepared for you.  END_OF_DOCUMENT_TOKEN_TO_BE_REPLACED

The spring of 2017 was such a busy time for LP; she was in the crossfire of two major tours, her European and American respectively, with three prestigious American late night TV shows squeezed in between them, as well as the premiere of the US edition of her Lost On You album on top of it all. Our guess is that the conversation with Maiya Sicklin took place around LP’s tour-closing show in Koko Camden, back in late April.  END_OF_DOCUMENT_TOKEN_TO_BE_REPLACED

The video itself is a treat and we especially like the moment when LP walks the streets of London. She talks about her career and also explains what, in her opinion, is important when you’re a young artist. END_OF_DOCUMENT_TOKEN_TO_BE_REPLACED