Last April, in between her two Switzerland show dates, LP took a little detour off her European journey and visited Africa – Morocco to be specific – to play at the Casablanca Jazz Festival, also called Jazzablanca. And, as she always does when she visits a new territory, she was engaged in dozens of interviews; she was quite likely booked by all the major media houses in the country. Our favorite piece of all that was published would be a written interview done by the online city guide, Made In Casablanca. 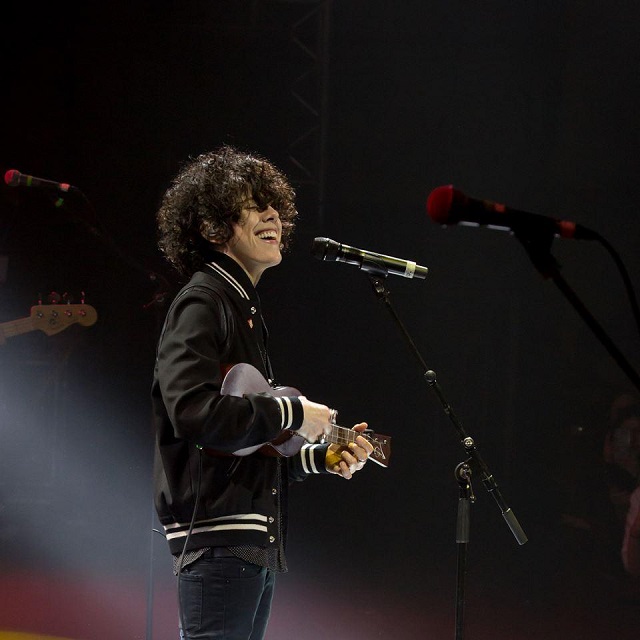 LP performing during Jazzablanca, photo credit: Made In Casablanca

The interview was originally published in French, even though it had been conducted by the Moroccan journalist in English, but then translated into French for publication. And then, what we did was we asked a woman of many talents, Veronica Tedderson, to translate it back from French to English so that we could work with it a little bit and finally publish it here. Therefore, there are several layers of hope here: we hope that the journalist understood what LP had in mind, we hope that the French version presents that too, and that we didn’t get lost in the complex backward-translation into English, either. Fingers crossed for all of that. Anyway, the interview was really well done and very interesting, and we simply couldn’t resist having it here.

One of the reasons we decided to bring this conversation out is because it gives us some background info to how “No Witness” came to life, and we really can’t think of any other interview where LP has commented on this song. But it’s not a surprise that this question was asked only there, in Casablanca – reportedly it was “No Witness” that really whipped the Moroccan audience up, and turned the seated concert into a rather jumping one. No wonder. The song is a  k i l l e r.

And the interview is a cross-cultural treat, too, which makes it even more interesting. Both the original introduction to this interview and how it was put into writing differs a lot from what we are used to while reading American and European ones. It’s super cheery, you can feel the joy, excitement and enthusiasm pouring out of it, which at the same time doesn’t stop it from being intelligent and smooth. It’s simply cute and entertaining, and we loved reading it! And it’s so honest when referring to the author’s frame of mind while meeting her. “Destabilizing smile” – like, honestly, who in the North would ever write that!

Go ahead and dive in; the translation into English is right below.

She’s among the artists who transmit their souls through their songs that mark the spirit. She was in Casablanca for the Jazzablanca festival, and god, we loved meeting her!

LP, Laura Pergolizzi, New Yorker with an Old Soul, just as we like them. She, who wrote songs for Rihanna and also Christina Aguilera, gave us an improvised interview… And if you don’t know LP – the writer, composer, singer, who dipped into our feelings and into her own to give us, in her songs, a part of her soul, and to conquer ours – it’s time you catch up! LP, exclusive, for Made In Casablanca!

We met LP for a very special exchange that felt more like sharing between friends, because we too poured ourselves, without any sense of taboo, without limits of language or of culture, into this little woman who has a whole world inside of her. This meeting wasn’t planned, but after we asked her a couple of questions during the press conference, we realized it wasn’t sufficient, we needed more, much more… So, it was only natural that we asked for a one-to-one interview, first to the magnificent Intisusar Nechnech, one of the organizers, who then introduced us to LP’s manager. The young man didn’t think long before saying, “Yes, why not?” (thank you Tissy!)

A tattoo, a caravel, all across her chest, endearing eyes hidden under curly hair, and a destabilizing smile, she was waiting for us. She meets us with a huge smile, in the hall of Mogador Hotel. The conversation starts and it’s around the ring our journalist is wearing, an exchange on the styles, the (precious) stones, and then those accessories we don’t wear but that are part of our bodies, our beings… We had a good start!

Made In Casablanca: Is there a word, or several words, that come to you every time you start writing a song? Some kind of obsession?

LP: Oh god, no! And that’s exactly the set up that I like. When I’m writing, I never know what will come out of my mouth, I really never know. I collect different things, moments around me, I write everything down in my phone to be able to remember the circumstances later. For instance, I was in the back of a van listening to some Paolo Nutini (I was touring then), when the phrase “lost on you” crossed my mind. I remember clearly having thought that phrase, telling myself it was very beautiful… you know what I mean. Sometimes, I write a phrase and I pass days or even months going around it. For “Lost On You,” I told my producers and the writers I work with that I had an idea for a song, but that I wasn’t ready yet to REALLY write it. That song was born out of a great pain, a breakup, and I had to wait more than ten months for the moment when I wasn’t suffering anymore, I had a new girlfriend and the mood wasn’t the same anymore. I was happy, but the words of that song just came out because they had to, at some point. [Editor’s note – we feel that here, in the last three sentences, LP had in mind not “Lost On You”, but another song, “Other People,” about which she talked a number of times that she waited for almost a year to write.] In the same way, for “Into The Wild,” I was in the studio, composing melodies in my head, when those words stormed in, and I really didn’t know about the book nor the film with that title.

MIC: Tell me about “No Witness.” What were you thinking about while writing this song?

MIC: Yes, it’s one of my favorites, and somehow it puts me in good mood.

LP: Oh, great! Very happy to hear it! When I wrote that song, actually, I didn’t know I was going to sing it at the time, it was for a TV program. The theme was about good people who ended up doing wrong or some bad things. I was just getting out of a very dark time with my ex-girlfriend, who was – who is – a very good person but who did lots of bad things. After talking for two hours with the guy who commissioned the song, after listening to him play some little tune, some humming, I jumped from my place, locked myself up for 45 minutes and the song was born! (laughs)

MIC: I actually recognize you in the videos for your songs, and I feel like they resemble you… Do you choose the themes yourself?

LP: Yes! With Chuck Willis, we complete each other… It’s as if we write the song lyrics together. We have great chemistry.

MIC: To write means to expose oneself, give a part of oneself to others… And you seem a very reserved person, is it easy for you?

LP: The truth is, I never thought I was going to be so open about my life, you know what I mean, I’m a pretty sociable person and all, but on the world scene, I didn’t think I could be so open and share so many feelings. I also think that everything that touches us, as human beings, everything that makes us vulnerable, is beautiful, artistically. “Lost On You” is about breaking up, a lack of trust, the broken heart, but look at its success all around the world! It’s almost ironic, ‘cause the day I played that song and two other songs for my old label, the day I presented those three songs to a sort of a jury that had to decide if the label was going to keep me or not… my label dropped me. But that was a bad thing that turned out to be a good thing, ‘cause I owed them 1,5 million dollars… Dropping me, they dropped all that (laughs). That situation is a good lesson for me today, ‘cause art is also this. You propose a song that you consider your treasure, but others can see it as trash… You continue your way, believing in yourself and in that particular song, and then: boom! The song finds success that surpasses your own expectations. It’s a lesson I’m not going to forget.

MIC: I see that “Lost On You” marked you profoundly… But did you think that it would become kind of a “therapy” song for your public?

LP: No, absolutely not! I wrote that song for a woman who shared my life and was a good person, but who hurt me a lot. At that time, I was taking a break from writing, and I even decided to do a cover, in tribute to Paul Simon. I listened to and sang “Slip Slidin’ Away,” and I wanted to sing “Still Crazy After All These Years” which I think is an adult, mature song… It is about this kind of relationship that lasts for all your life, where you make some fucking plans as a couple: kids, a house and a car… That’s an example that I lived, with my parents’ marriage… The cruelty that takes place, even in the most beautiful stories. To write a song that allows you to exorcise your own demons, but in the end everyone can identify themselves there. All this is to tell you that “Lost On You” was definitely a good starting point.

MIC: Last question: you said in one of your interviews that you feel more at ease with LP than with Laura Pergolizzi. Why?

LP: Wow… It’s true. I even discussed it with my therapist, who said that when I pronounce my name entirely, he thinks of a quiet river, but when I say LP he imagines an erupting volcano (laughs).

Veronica Tedderson, if it was not enough that you are an insanely talented photographer and speak a zillion languages, you are also cool enough to take your time and translate a full interview with LP from French into English. This is your baby, this article, thank you!

✶ LP gave this interviews during the Jazzablanca festival, where she played a show on April 8th of 2017.

✶ Chuck B. Willis – an American director, based in Los Angeles. He worked with LP creating short films for some of her singles: “Lost On You,” “Other People,” “Tightrope” and “When We’re High.”

So, was it fun? You can see for yourself. Nonetheless, her answers are insightful and show her songwriting process in yet another light, so it’s something which is definitely worth watching.  END_OF_DOCUMENT_TOKEN_TO_BE_REPLACED

In this interview, two particularly interesting issues were raised: if LP is vegan and how she feels about French people. Curious? Go ahead and find out what LP has to say about it. Apart from the interview, we found a 25-minute long live performance which LP did for RFM back in September of 2016, the one Vincent was probably referring to  END_OF_DOCUMENT_TOKEN_TO_BE_REPLACED

And it wouldn’t hurt to loosen up every now and then. Cher is Cher, and she’s fabulous. Whenever the conversation leads up to her, that’s the ultimate conclusion. Come on, not every single thing you put on has to carry this straightforward arty vibe, right? END_OF_DOCUMENT_TOKEN_TO_BE_REPLACED