So, we have a little continuation of our last write-up about LP’s collaboration with the Australian duo, The Veronicas, for you, as the story didn’t actually end with the release of the single, “Lolita.” (Geez, the acoustic version we wrote about keeps haunting us all the time, it’s so intense and charged… Brilliant.) And here’s is a bit of praise about yet another song they wrote together, “Line Of Fire,” included on The Veronicas’ eponymous album, released in 2014. 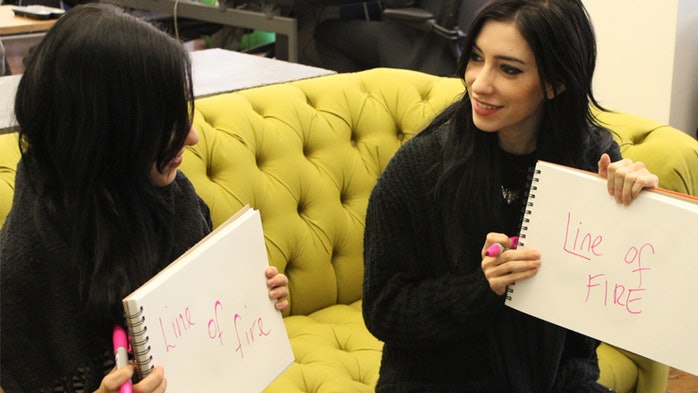 The Veronicas pointing out “Line Of Fire,” co-written by LP, as their favorite song off the album; photo credit: the Bustle magazine

Soon after releasing “Lolita” in 2012, The Veronicas parted ways with Warner Bros., for they couldn’t agree on a common vision for their musical direction. As a result, their ready-to-release album was shelved and the duo decided that it was time to change their label. Soon, they signed with Sony, and not long after they released their new and long-awaited album, The Veronicas.

The album’s sound has often been defined as “progressive pop,” with nods to such distant genres as blues, grunge, rock and rap. To be honest, it’s not exactly our cup of tea, but we have to give it to them – The Veronicas aimed high and managed to create a truly eclectic mix of different vibes (a risky move regarding their audience, for on one hand you’ll probably find something resonating with your esthetics, but on the other, you may feel the urge to skip a track or two…)

“Line of Fire” was written by LP, The Veronicas and Toby Gad, who also took care of the song’s production. The song was the iTunes countdown single for the album and it got a good critical response (The Guardian, Popjustice, Album Confessions, Subba Cultcha, Pop Wrapped). Reviewers and bloggers praised its lurching melodies and dark, sultry sound, as well as the hip hop beat and raspy vocals. Both Jessica and Lisa find “Line Of Fire” to be something they are really proud of and they pointed out this song as their favorite off the album. Jessica commented on the song via Twitter: “I wrote ‘Line of Fire’ crushing on someone who already had a GF. But I couldn’t stop my feelings for them/ or pretend we didn’t both feel it.” When talking to Pop Bytes about the album, The Veronicas explained a bit the creative process behind the song:

JESS: (…) Songs like “Did You Miss Me” and “Line of Fire” have very obvious production elements to them. We really just had fun with that in a way that we hadn’t really done before because there was no predisposition to a genre.

LISA: Yes. It was just what we heard in our minds. We felt very free and very inspired through every little part of the process. From each sound to each lyric to the way things were mixed and mastered. We’re very, very hands on in a way that made for music that is just a natural progression.

The song has caught our attention thanks to the line, “Going for the kill, you know you make me feel like a hunter.” It’s really well put together, and sung as though exhaling, and we like this effect a lot. However retro the song opening bass line was made to be, it’s also quite a nice way to be introduced to the song (a bit of an attempt on the “Billie Jean” or “When We’re High” effect.)  Although the song has this 30-Seconds-To-Mars aftertaste that we are a bit allergic to (that being making most of the song really big and noisy), it is actually fun. Makes you feel as if it’s the holidays, you are a teenager, and the next song up is going to be, say, “Genie In A Bottle” or something. Retro, indeed.

By the way, if you go through the credits included in the album’s booklet, another familiar name will probably catch your attention: Josh Alexander, who co-wrote two other songs for The Veronicas’ album, “Did You Miss Me (I’m a Veronica)” and “Mad Love.” LP also collaborated with Josh, writing songs for her own records. They teamed up with Billy Steinberg, who is Josh’s long-time songwriting partner. First, the three of them wrote for LP’s 2009 album, which fell short of being released in the last minute, but shortly before that their song “Cling To Me” had been put out as an album teaser (and let us just say: “Cling To Me” is such a cool song!). Later, they wrote a few songs for LP’s 2014 album, Forever For Now, out of which “Savanah” and “Salvation” made it to the record. They also wrote one song that has never been released, “All This Time”, and a song called “Magic” (the latter being recently included on the deluxe version of Forever For Now).

So, here’s “Line Of Fire” co-written by LP for and with The Veronicas – enjoy! 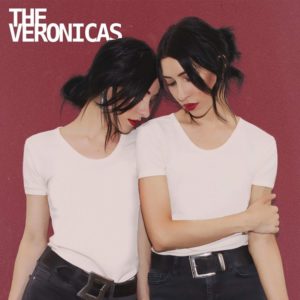 The artwork for The Veronicas album (2014)

✶ The Veronicas – an Australian duo comprised of twin sisters, Lisa and Jessica Origliasso. They made their debut in 2005 with the successful album, The Secret Life of…

✶ Toby Gad – a German producer and songwriter, based in Los Angeles. He’s worked with and for Beyoncé, Madonna, John Legend, Fergie, The Veronicas, and Leona Lewis, among others.

“Wasted Love” is one of our favorite songs by LP, and quite likely our favorite from outside the Lost On You album. And maybe even the most frequently played song of hers in our headphones. We love the live version recorded for the EP “Into The Wild: Live in EastWest Studios.” (Ah, we could go on and on about the way she sings “it wasn’t mine”…) END_OF_DOCUMENT_TOKEN_TO_BE_REPLACED

Or, often, we read… Oh, we love us a good written LP interview from time to time. And this BMI interview we have here is really well done, and it’s all about songwriting, so how could we possibly resist. LP is really generous in sharing insights about her craft here. END_OF_DOCUMENT_TOKEN_TO_BE_REPLACED

When the reply comes, we just look at each other and smile. “Are you ok to travel to Camden Town?” Of all places in London, Yoshi suggests Camden. So now it’s certain – the magic is going to happen again.  END_OF_DOCUMENT_TOKEN_TO_BE_REPLACED