The setting of the stage was dark. The lights were soft and smoky, randomly illuminating parts and places of the amphitheatre, flashing sometimes towards the audience and giving this effect of lightning rolling overhead. There wasn’t any spotlight following her moves, so quite likely, she could see the crowd clearly from where she stood. The audience, with the front row seated right on the stage floor, was exactly as far or as close as she wanted it to be at any moment: either far away, or quite near, or literally clinging to and all over her each time she approached a bit too closely, much to their delight. But as the audience is a source for her, she kept reaching out, much to the dismay of her security. But it’s LP show, and it has its own laws. 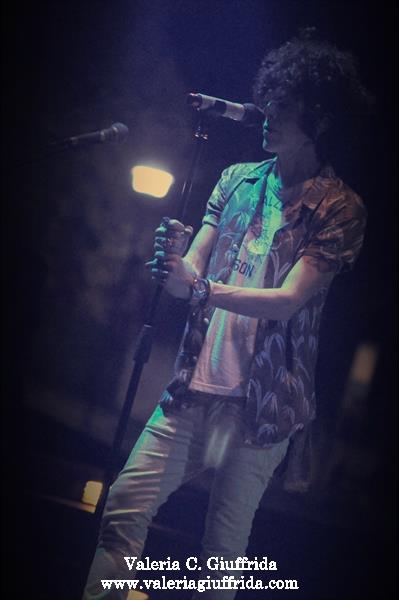 We couldn’t wait for LP’s Summer Tour, we really couldn’t. When this kind of live performer tours on an album which is this brilliant, you just count the days. And we also felt that it may be our very last opportunity to hear LP play the majority of her Lost On You songs during one set. So we made sure to listen and watch even more carefully, not to miss a single note or sensation. And since Sicily is a great love of our lives and Mount Etna is this extreme epicenter of everything that is the greatest and the worst about the island, when you add yet another startling element – LP’s art displayed live on the very slopes of this volcano – well… That surely guarantees an emotion or two. In other words, it doesn’t get more violent or delightful for our souls than that.

Sicily. An island which belongs to itself and to its people. It’s not really Italy, as it has not really ever belonged to anybody who has ever tried to rule it in the past. Not fully, not for real. It was never Spain, Greece, the Byzantine Empire, Rome or any other world power, and although many have tried to shape it as they saw fit, Sicily has simply waited it all out, patiently.

Zafferana wasn’t the first of LP’s shows we saw this summer. Before that, we went to see her play in the botanical garden in Merano, and we couldn’t do anything better for ourselves. In Merano we heard all the new arrangements that LP had prepared for her new tour for the first time. Almost each song got something new, either something as big as a whole new outro or as subtle as a slight drum pattern change. Having already been through all the surprises and the “oohs” and “ahs” after the show in Merano, we were actually prepared for them and to completely totally immerse ourselves in the Sicilian show, to really hear and get into the music. It took us through all the novelties, from the postmodern industrial spoken intro and through “Up Against Me,” a smart almost-protest-song that has shined more and more with every tour and eventually won its place as an opening piece; a brilliant “Muddy Waters” with this new, classic rock finale which is just so right there that you are actually shocked that it hasn’t been there forever; up to a cathartic rendition of “No Witness” with this suggestive tiny pause right before the vocals come in.

It has so much passion, this land. It is fertile, flowery seashores; it is arid, dry desert in the center; it is the constant tension in the air with the African Sirocco wind carrying the sand from Sahara; it is this tightness beneath the ground, bringing out the earthquakes and the lava flows. And through all this, to us, Sicily feels of home.

Of course, we knew what was about to happen; we were convinced that the energy of this place would harmonize with LP’s art. How beautifully the music made itself at home there! Everything felt right. The flow was moving, really taking us places, regardless of whether we were familiar with the song for the long time already or not. “Dreamer” and “Girls Go Wild,” which LP premiered this year, are such rockstars within the set! The first one – big, anthemic, just perfect for the obvious vocal show off (and please do bring it on, like, whenever…), but then – “Girls Go Wild,” this fun cool little sister of “Dreamer,” with whom you just like to casually hang out. At least until she arrives with that insane vocal hook, the one you first hear just before the chorus, when you realize you’ve been fooled like a child, and that now you just can’t decide which sister’s hotter. Sorry… (Little side note, the Sicilian audience would probably vote “Dreamer,” as LP dived into the crowd several time during the performance, exhibiting this particular predilection for the least accessible nooks of the theatre. We really felt for those despairing security officers.) 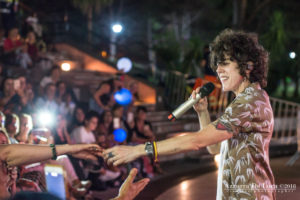 LP in Zafferana © Azzurra De Luca, courtesy of the author

And then, “Free To Love” which was just fucking unbelievable. What she did there was just ridiculous, she put so much vibrant energy into this song, and in a very different way than it’s pronounced in the studio version produced for the album. It was not about being energetic, loud and all over the place. It was about delivering that message and that music incisively, just spot-on. It was a shot of emotion injected straight into your heart.

Finally, the highlight. As it stands out amongst LP’s discography, “Suspicion” also entirely transforms the ambiance of LP’s concert. This one-piece-rock-opera is, without a doubt, a live show masterpiece. And in Sicily LP made sure to steal the audience’s breath away with her evocative performance. Now, ever since we wrote about LP’s 2017 concerts, we’ve promised ourselves not to mention the word “mic stand” here ever again, so please do us a favor and watch a video of the Sicilian performance of “Suspicion” on your own.

Etna. It’s a she. And she is fire beneath your feet, literally. A mountain that never sleeps, and is just as lively and violent as she is beautiful and generous to the people who dare to live on it. When they speak of her, they point at her and they touch their chests to point at her again and say: “Connection.”

This setting, this closeness to LP, brought out something we lacked so much in Merano a month earlier, when we watched her perform on a stage placed in the middle of a pond, really far away from the audience. In Zafferana there was so much of this true connection, an element so hard to describe. But LP’s show needs it, and it needs it to be physical. There must be a real touch, a real look in the eyes, both being a confirmation of a mutual understanding. And so, when you’re a part of it, it’s this peculiar electric feeling, as though not only an artist is necessary for the show and this moment, but you are, too, just as well as they are, as though without you it couldn’t possibly happen. And it really couldn’t, at least for you. Because there is absolutely no way to translate this particular thing into a recording, there is no way to feel this sensation when you watch a video. And because it is such a huge part of what LP does, you really are needed, just then and there, to make it happen. Not many artists are able to do that, to turn their show into so much more than a performance: into a conversation. We know, we’ve seen a bunch of them. It’s a rare talent.

Every now and then the earth on Etna just opens up, in some random place, wherever it wishes, and turns the land red. She usually warns you first, by making a low, growling sound. Hard to believe she really does it. But once you get to hear her when you walk in silence along her spicily fragrant paths up there, there’s something imprinted in your heart forever, from that moment on.

What do you do after a show like this? The unified powers of LP and Sicily surely did their thing, and so, as we left the venue, stopped for the appropriate amount of Limoncello at the nearest bar, and started walking, only at 4 am did we realize that we still were walking and talking and brainstorming. Almost wrote this entire thing right then and there. And the next day we learned that during LP’s show, Etna woke up, giving the town of Zafferana an earthquake. Well, it is no wonder…

“Can’t be near you without there being fire”

“Could anybody even survive here?”

It’s one of the rare interviews where LP discusses her look, giving brand names and explaining its evolution. And it’s a cool story with LP’s life journey as background. Starring her iconic leopard-print jacket. END_OF_DOCUMENT_TOKEN_TO_BE_REPLACED

We gave it a try and translated it into English, which was a fun / scary / creative / wow experience in a way. Basically, we tried to guess what her choice of words would be. And we based that on what was already translated into Polish by Dzika Banda. END_OF_DOCUMENT_TOKEN_TO_BE_REPLACED

The interview for LOS40 she gave in November of 2016 is just a regular radio interview, a meeting between the artist and the host, and the aim probably wasn’t to make it the most sophisticated thing ever. Yet, there are two or three split seconds when, while listening to LP’s conversation with Tony Aguilar, you feel touched, moved, somehow lost in thought. END_OF_DOCUMENT_TOKEN_TO_BE_REPLACED