So, we’ve finally got round to watching the most recent performance which LP did this spring. Still picking up our jaws from the floor, but already writing about it – this is where we’re at. Acting on the spur of the moment is usually risky, but not in this case, because LP’s acoustic performance of “When We’re High” for Sofar Sounds which she played several weeks ago was simply that good. The vocals, the interpretation, the precision, the elegance. A masterstroke. 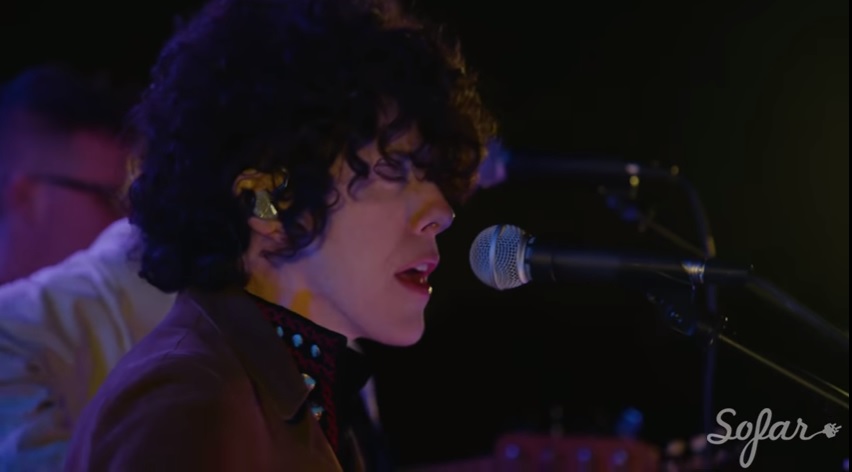 The Sofar Sounds performance instantly reminded us of yet another rendition of “When We’re High” that left us speechless. Interestingly, that other one was so very different when it comes to the vibe. It was a backstage thing that took place during the Hangout Festival, and was meant to be just a simple, casual set up of only an interview with a couple of songs sung in between questions and stories. The thing is, there was nothing “just” about how LP sang “When We’re High” there. She just burned that little radio tent to the ground. But before we go into that, we need to take one step back.

The Lost On You album is many things, to us. It’s the music, obviously. But setting the music aside for a brief moment – this particular record, track after track after track, is like an emotional roadmap. Each song conjures up another story, another set of events or string of thought. No idea how that happened, it must have been some slow, imperceptible, gradual process. If we were to indicate the most intense areas on this peculiar map, the set would surely consist of “You Want It All,” “Suspicion,” “When We’re High” and “Muddy Waters.” It’s funny how even saying the titles of the songs activates myriads of memories and thrills. One of these memories is surely one warm April night in Paris, over a year ago, when LP played “When We’re High” for the very first time (as cliche as it is, most first times really have something forever bonding to them.) But we’re digressing.

“When We’re High” has this fun, multi layered composition that gets brought to its fullest during live performances. We loved the way LP nailed describing this effect when asked by Bandsintown this February about her favorite song to perform:

“When We’re High” can be super fun to perform live, because I feel like people really move during it. I feel like it’s almost like a play where it has several different scenes and it’s super dramatic, but in a fun loving way.

So, two exquisite performances of “When We’re High.” The very first time LP played an acoustic version of the song, in May of 2017, and the very recent one, performed for Sofar Sounds in Los Angeles in April, right smack in between her two Coachella weekends. The first one – sharp, intense, cutting to the bone; the latter – cool, calm, collected. Both being exactly like LP put it, like a theatre play, indeed. And although the performances seem miles away from one another, neither of them could be any better.

What we absolutely love about the Hangout Radio version is the fabulous rawness of the performance. To be honest, after the last two years, we still have trouble believing in the immensity of her singing talent. Whether it’s hearing her live, with our own ears, or watching the videos, we still can’t believe it (maybe we’re just fucking slow, who knows?). Especially in moments such as the Hangout performance, the very first “When We’re High” acoustic play, when LP had to take all the weight of this impressively difficult song (even from amongst LP’s ever-challenging work!) on herself. And she did, as always, with her unexpected vocals making everything disappear, together with all the minor arrangement hesitations that just have to be there during the first performance in a new set up. As raw edged as LP can make her voice sound, she didn’t seem to hold back on this effect, quite the opposite. As a result, the very last seconds of the song highlight even more of this impossible passage from her ice-cold soprano back to her ashen low timbre. It even made the host of the show do pretty interesting things, like saying to his audience: “keep it tuned here, ‘cause we will be having more performances, but probably not as… impressive as that was.” Well, that was probably quite right and we can’t blame him for not being able to resist.

Fast forward one year, to April 2018, and we’re looking at LP and the band seated in the most beautiful evening set-up, illuminated by blue fairy lights. And the spectacle that takes place right after you press play is nothing short of perfection. The song has visibly gone a long way over the past year and was served to the lucky Sofar audience as well-mastered as it gets – with LP gently, but decidedly, taking them through a story of love, love, and love, in all its different moments and shapes. We’re not sure how to go about describing it, but sometimes LP does something very unexpected to a song that already has some definite vibe kind of assigned, and manages to turn it all around. The regular “When We’re High” seems to have, more often than not, this strong, seductive, playful effect on the audience. But last April in LA, the equilibrium of the performance was shifted in favor of storytelling. We are tempted to call it The Bougainvillea Flowers Effect, if only it weren’t something that we made up just now, basing it on our Gardone Riviera show impressions. Maybe it’s the forthcoming Italian shows’ tension that’s got into our blood already, although it’s still one week away. It’s all about what we are left with when LP decides to downplay the performance and highlight the story. There is something… particular to how LP tells it, sings it there. And the instruments bring a spellbound background to it, sounding distinct and really beautiful. The soft beats of Eli’s cajon, the cool bass line, the delicate ukulele, and this little something of the gypsy romanticism to the guitar line and LP’s swirling vocals. So fine.

Interestingly, even when LP talks about “When We’re High,” she usually mentions this duality that likely makes it such an excellent song. First, the duality of how she sees the song herself:

It’s probably not my deepest song… but it is, in a way. It’s about staying high on the good stuff in life and forgetting the bad stuff for a minute. (Music-news .com, November 2017)

Then, the duality of the love story behind it and how different it can be:

It’s wanting to access that place in your relationship where you are at your best with your lover. And then sometimes the downfall of it being – do we only get here when we are actually high? (Schon Magazine, December, 2017)

And finally, the duality of the original inspiration while writing the song:

That’s just me trying to get back to that, that love spot, you know? I’m kind of fascinated by the point of impact, when you’re suddenly, ‘Oh, shit, I’m in love with this person!’ And then I’m morosely fascinated with when it ends. That moment that the molecule… [mimes breaking apart with her hands] detaches from the other molecule and you’re like ‘Oh… It’s going…’ It like, it breaks my heart to even think about. It breaks my heart when – I don’t know if you yourself have been in this experience – but [I’ve] now been on both sides of the coin, the one where it sucks falling out of love with someone and telling them that and dealing with it, and [the one where] it sucks when you see it happening. It’s the worst. (Spindle Magazine, December, 2017)

Here they are for you, two masterpieces, each of another breed, each bringing a brilliant new element to what’s already out there.

(sadly, the Sofar video is currently not available, here’s a snippet) 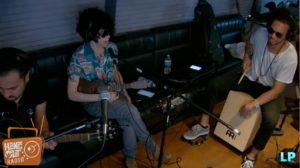 ✶ Hangout Radio performance took place on May 20th, 2017, in Gulf Shores (AL), with JD Carrera on the guitar and Elias Logothetis on the cajon. At the same day LP played a full set during the Hangout Fest.

✶ Sofar Sounds performance took place on April 18th, 2018, in Los Angeles, with Brian Stanley on the bass, Elias Logothetis on the cajon and Alex Feder on the guitar.

✶ “When We’re High” is a song that was released on the extended version of the Lost On You album, on May 5th, 2017. It was written by LP, Mike Del Rio and Nate Campany. The team worked extensively on the song in late 2016 in Paris.

✶ The official video for the “When We’re High” single

✶ Sofar Sounds – here it is, as the people behind this beautiful idea describe it: “A Sofar gig is an intimate show held in an unique venue, like someone’s living room or an antique shop. It typically features three artists, playing four songs each. Every lineup is specially curated to give our audiences a diverse show.” So basically, you sign up, you have no idea who is going to play or where. Then you receive an email with the address of the secret spot, you go there and only when the artists hit the stage do you learn who they are. Great? Great.

✶ Hangout Music Festival – an annual music event that takes place on the beaches of Gulf Shores in Alabama.

It seems like the way LP sings “Lost On You” depends on the circumstances. There are big shows, where she celebrates the success of the song and sings along with the audience, beaming with happiness (while the song itself is far from being cheerful.) And there are also studio performances, where she stays focused and actually concentrates on the words, which was the case in the World Cafe. END_OF_DOCUMENT_TOKEN_TO_BE_REPLACED

We believe that one of those times was when LP performed “Little Lion Man” on June 8th, 2011 in Los Angeles. We are so grateful to the wonderfully considerate person who recorded this amazing performance.  END_OF_DOCUMENT_TOKEN_TO_BE_REPLACED

We gave it a try and translated it into English, which was a fun / scary / creative / wow experience in a way. Basically, we tried to guess what her choice of words would be. And we based that on what was already translated into Polish by Dzika Banda. END_OF_DOCUMENT_TOKEN_TO_BE_REPLACED