In December, 2015, LP and Darren Criss met in Los Angeles to shoot a video for the series “Act Like a Musician,” which we have for you today. Darren Criss is an actor and a songwriter, and he plays the uke as well. He is most famous from his role in the Glee TV series, which was very popular in the USA between the years 2009-2015. 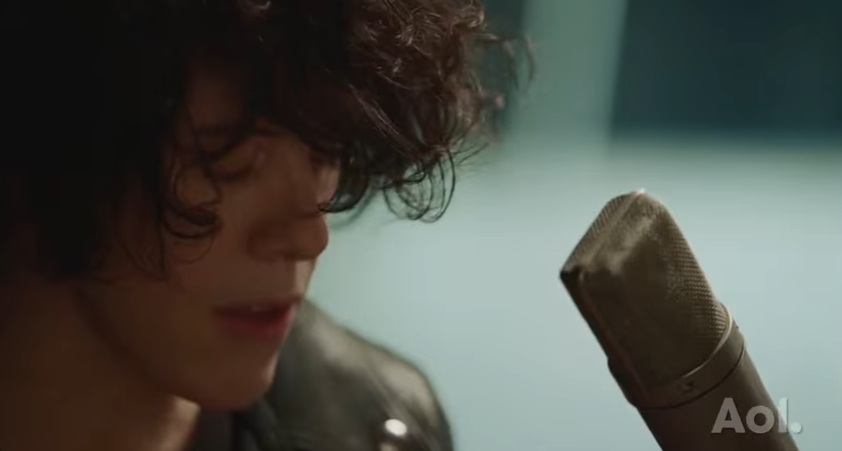 Their conversation is casual and not really in-depth, but there are some things about it that make it probably one of the most beloved interviews with LP, ever. Firstly, the video features one precious rarity: at the end of it they play ukuleles and LP sings “Cheers,” which she wrote for Rihanna. It’s been on repeat on our computers since the first day we saw this video. Secondly, she is relaxed, she jokes around and looks absolutely stunning, you simply can’t take your eyes off her. They talk about their careers a bit and the satisfaction they find in songwriting. They also mention Hollywood’s heritage and the spiritual side of LA from their perspective as songwriters.

We prepared the full transcript of this interview for you to find below. Have a pleasant read, although… once you’re done, go ahead and play yourself the video too. For your viewing pleasure.

P.S. This is exactly how LP looked when we ran at her, or better said – she ran at as, in Berlin in front of the Lido club in November, 2016. We forgot how to communicate in English.

Darren Criss: You look so cool!

DC: Oh, thank you, I dressed for the occasion.

DC: God, you look cool! I feel like you just should dress like that all the time.

DC: Look at this.

DC: I brought my LP wig.

LP: The extra version. The pre-abridged.

DC: Yeah, me too. I wanted to dress for a day. It’s good I didn’t wear my black jacket…

DC: ‘Cause that would have been too much, they wouldn’t know who is who.

LP: We don’t know each other well yet. We’re just…

DC: We’ve been on the periphery of each other’s lives for a while.

DC: I think that people who watch don’t really… they take it for granted, being in music industry. I don’t think that writing music for other people is a part of that journey.

LP: Yeah, that’s weird, right? That came when I thought… I thought my career, like, I’d had two major label deals that didn’t yield a record, but I wrote a shit-tone of songs, crazy number of songs. So songs kept getting pulled from my catalogue to go to other people and then… Actually it’s really cool being a songwriter.

DC: Yeah. Do you get great, like… I do… I get a lot of satisfaction when I hear other people sing songs I’ve written.

DC: More than I would have if I did it.

DC: I don’t know if it’s the same for everybody or are they, some sort, like: “Oh, I really should have cut that…”

LP: You now, maybe I’ve been lucky that I haven’t had that song yet.

LP: So now, when you got Glee, like, how did, how did it exactly happen, like, where did it come out of?

DC: I mean, it was sort of string of events and a show was already a hit, I was senior at college when it was a hit.

DC: I remember going: “Jesus, this is, like, a huge deal.” And… it wasn’t till the second season that I got on the show. And it was like, wow, I get to join, like, you know, like One Direction or something. But by the time I got to the final season, this would’ve been last year around this time, I finally said: “You know what, I, I’ve got nothing to lose.” I went [?] to a big boss and I was like: “What do you think of the idea of writing a song for this, I might write it for Lea and we’ll just see how it goes, if you don’t like it, my feelings won’t be hurt.” So, I end up writing what’d be Lea Michel’s last song on the show.

DC: That was so funny…

DC: …’cause I was writing specifically for her, so I kind of had a lot of the ground work done…

DC: …and to get to that level was extremely gratifying and made me really, it was really encouraging, as a songwriter…

LP: I have a new record, I just started releasing a couple of songs this year and gonna be releasing more next year.

LP: Yeah, I really dig them, I’m an indie person at heart, always been.

LP: Thanks, man. As a Darren fan I’m excited for your new record too.

DC: Yeah, one of these days I’m getting around to that, but I’m not…

DC: It’s coming. When I’m not [?] around as an actor somewhere in the world.

LP: Let’s talk about LA for a second. I feel like, you know, I’m a New Yorker, but I feel like, LA, the music muse is so deep for me.

LP: I can feel it more, it’s more palpable here.

DC: Well, I think there is the thing here and this is from music, there is the history and obviously as an actor, so there’s all other side of this conversation…

LP: Yeah, I mean Hollywood. Like, for an actor, I trip out on the Hollywood actor, like a heritage of this. I live in a silent movie film star’s house.

DC: Is that star still alive?

DC: I’m living with silent movie film star, she’s 113, she doesn’t say much, but that’s always worked for her.

LP: She’s in the basement. Yeah…

DC: Should we… should we play the uke, so we can use them?

DC: I think we should probably [?] like actors in the past, like wanna learn the song before making ass of themselves.

DC: I like making an ass of myself, I do it for a living, so it was very important to me, as I look down the mirror, it was important to me not to learn the song, I don’t know what the song is and I don’t really know how to play chords in ukulele.

LP: It’s a Rihanna song, it was on her album Loud.

DC: Like a super sexy outfit and just a little uke. That sounds like a joke, but could be also a goldmine.

DC: So, you… it was a track… so you, you were supposed like, write…

DC: Yeah, if I hear it, I’m feeling I might recognize it.

LP: Yeah. It was a single, a last single on that record. And there is one little part that has, a chorus of friends, kind of going (“yeeee.”)

LP: Yeah. That was all of us. That was my friends, their friends.

LP: Everybody came in. So, it’s a memorable, fun session.

DC: ‘Cause we could be talking for hours and hours.

DC: Let’s give them what they want.

LP: Let’s get the damned song…

[LP sings a snippet of “Lost on You”]

DC: I was enjoying that.

LP: Yeah. But this song is fun to play on ukulele, yeah. I was just gonna teach you to it now.

LP: You will probably wanna accustom these.

DC: Great, thank you. Look at these. For Harry Potter fans.

LP: That was dropped on his head, though. It’s basically just E, D, A and we can start it, like (singing).

DC: You’re gonna to give me the…

LP: Yeah. (singing) And on this part, for the whole beginning of the verse it stays on the E for two bars and the chorus is same.

DC: That wasn’t the chorus?

LP: I mean that the verse is the same of course. Jesus!

DC: But it’s in the fuller form.

DC: Nice. Sweet. I’ll drink to that! But where the drinks are, for real?

✶ When LP says that she wrote “a shit ton of songs”, she means years 2006-2008, she wrote well over a hundred songs, some of which were picked by other artists from her catalogue, but she as an artist didn’t release any record

✶ When LP talks about her “new record”, she means songs which will be later included on the EP titled Death Valley. At the moment of the interview she had two singles released: “Muddy Waters” and “Lost On You”.

In this interview, LP mentioned her appearance at this festival in 2006, after which a lot of labels had fought between themselves to recruit LP and work with her. The one that won her was a major label, the Island Def Jam Music Group, owned by Universal.  END_OF_DOCUMENT_TOKEN_TO_BE_REPLACED

It’s probably a bit late for this, 15 months in, but we feel we should explain the idea behind our “outstanding performance” series. An interesting thing about the general idea of standing out is that there’s always some grabbing element to it. And whenever you get to be the receiving party, you’re granted this rare opportunity of letting it influence you in some peculiar way. END_OF_DOCUMENT_TOKEN_TO_BE_REPLACED

The interview happened on February 11th of 2018, between two of LP’s San Francisco dates from her Winter American Tour. The questions start-off from LP’s private life and go through her then-upcoming Coachella show, then on to her European success, and the “Greek Guy” set of events. While most of that seems like a quite standard list of topics, it’s the way that the conversation went around each of them that really set the uneasy mood of this interview. END_OF_DOCUMENT_TOKEN_TO_BE_REPLACED