In a world full of copycats, sad repetitions, and bogus choices, we feel this visceral craving for some non-manufactured originality. A rare thing these days. Actually, this is what attracted us to LP in the first place. And when LP sings “The Widow” by The Mars Volta, we feel that uniqueness even more. An unobvious choice for a song to cover, that’s the first thing. Arranged for the ukulele, that’s the second. LP nailed keeping the song’s vibe while designing her rendition, so we always take great pleasure in listening to her version. There’s of course a video of LP singing “The Widow” as a part of her ukulele cover series. But we’ve got another version here – one LP recorded during her visit to the Mexican Radio Ibero 90.9 in 2012. 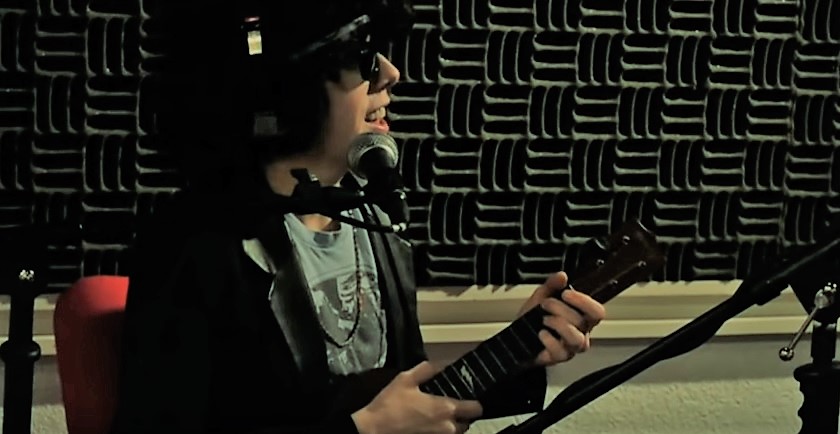 It’s peculiar, the way we came across The Mars Volta. It was some ten years ago, on some old pen drive of unknown origin, when we found an mp3 off The Mars Volta’s second album, Frances the Mute (2005). The music got our attention right away. Quite likely, the way the band loosely speaks with the early work of Pink Floyd did the trick.  (Oh, and check out the artwork for their album covers!)

We like the stories about songs which were too ambitious to be even included on the albums, or those that had to undergo quite severe cuts to become more radio-friendly. The very phenomenon marks out this tight line of demarcation between the freedom of the art and market goals, because, yes, an art is supposed to be unfettered, but it also has to, erm, sell. But anyway, it’s good for an artist to have this kind of story to their credit. For The Mars Volta, this story was about their 2005 hit song, “The Widow.” The album version of the song didn’t make it to the radios in its original form. It got shortened and cut right before its second half,  believing that the lack of a tonal center would scare away the vast majority of the radio audience. And this is the song that LP decided to cover.

Everybody says it, but starting from her Bardot and Sayers times, through the Forever For Now era, up to the present time, LP has always been a cover whisperer. Whatever genre she touches, be it dance music, rock standards or mainstream pop, she turns it into her own story. Especially when she arranges them for the ukulele. And indeed, whenever she uses it, it’s personal, and especially while writing. “When I write songs on the ukulele, they’re for myself,” she told Eagle3. Meaning, not for sell. Then, for most of the covers she’s recorded, she plays the ukulele, too, and so, these versions are not copies at all; they are somehow both close to the originals as well as being entirely hers, unique and appealing. Maybe the ukulele is the answer.

LP chooses the songs she covers very carefully. There are only several official recordings of such, and as for their original versions, they are mostly by male singers – Roy Orbison, The Beatles, Paul Simon, The Mars Volta, Leadbelly… And indeed, as she said in the interview for Ottawa Citizen in 2012:

I like to pick guy songs. I make it higher and more in my range, but do I like to sing covers very much true to the song because I feel like the song is made that way for a reason. I love really clever, interesting versions, but they have to be really good. I like songs that wail.

As mentioned above, there are two videos of LP singing “The Widow.”. One she recorded for her Ukulele Cover Series released while she was signed to Warner Bros. It’s a truly haunting rendition, recorded in 2012 in a batcave in Griffith Park in Los Angeles. The video was directed, recorded and edited by Claire Marie Vogel, and it’s a very special thing. The song itself is dark already, but choosing such a setup for the performance and stripping the song of its rock arrangement made it more disturbing and dire. In an interview for Fuse.TV in 2012, LP talked about playing covers and mentioned this version of “The Widow”:

I’ve been doing the series. I was actually gonna do “Creep” on a ukulele, but I felt like it needed… It’s so instrumental and I feel, as a singer, I kinda surf the wave of that song musically and I felt like the ukulele was just a little too thin for it. It’s nice sometimes, I did one that’s coming out, it’s a Mars Volta tune, and of course, you could say the same thing about that, but I felt like that lent itself a little bit better. There are certain songs that I just didn’t feel like I was singing as well with the ukulele.

But there is one more version of “The Widow” performed by LP, and it engages us more than the official cover – the 2021 Radio ibero version. Let us start by saying that she concludes her performance by saying “All right, I got through it. Yasss!” which maybe gives a little insight into the level of difficulty of the arrangement. The performance is arranged for the ukulele and the guitar, but it is still the ukulele in the foreground here. LP’s sharp, distinctive tone of voice, her signature (and our favorite) lower register, beautifully mingles with the instruments throughout the verses. Oh, these prolonged consonants at the end of some lines there… Little things, but this is what makes the performance so emotional. Overall, we love the cover and the performance is great, too. If you haven’t seen it yet, it’s something to check out, definitely.

✶ The Mars Volta – an American progressive/experimental rock band formed in 2001 in Texas. The band won a Grammy for Best Hard Rock Performance with the song “Wax Simulacra.” They played together for about ten years until they broke up in 2012.

✶ „The Widow” -a song from The Mars Volta their second album, Frances the Mute, released in 2005.

✶ Click here for the official video for “The Widow.”

✶ Other LP covers we love:

So, was it fun? You can see for yourself. Nonetheless, her answers are insightful and show her songwriting process in yet another light, so it’s something which is definitely worth watching.  END_OF_DOCUMENT_TOKEN_TO_BE_REPLACED

We believe that one of those times was when LP performed “Little Lion Man” on June 8th, 2011 in Los Angeles. We are so grateful to the wonderfully considerate person who recorded this amazing performance.  END_OF_DOCUMENT_TOKEN_TO_BE_REPLACED

“Porcupine” is a light, countryish love song, which seems to be a bit of a dialog with Frank Sinatra’s “The Lady Is a Tramp” when it comes to the lyrics. Anyways, said Lady and that Porcupine girl would probably have a good time going out for a beer. Even if it was a PBR.  END_OF_DOCUMENT_TOKEN_TO_BE_REPLACED