A year ago, in December of 2016, LP was a guest of the biggest and most popular Russian commercial radio station – Europa Plus. Her Lost In Europe tour was coming to an end, with only two Russian and two Polish shows ahead. She visited the Europa Plus studio on December 10th, on the day of her concert at Moscow’s Garage. The video is one hour long, but it’s worth watching lock, stock, and barrel for many different reasons. First of all, it includes an interview with LP, her performance, and meet and greet with the fans. But, what’s even more interesting, the camera doesn’t stop rolling during the commercial breaks and we get to see raw footage of the studio in between takes. The sound isn’t the best quality during the breaks, but still you can hear LP talking with the hosts and fans. 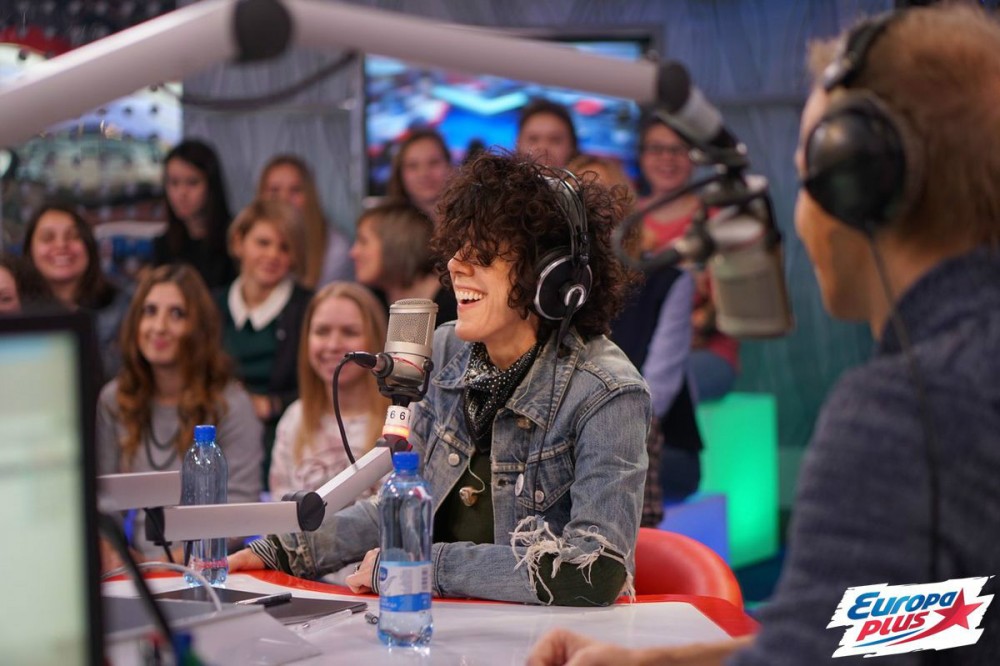 And so, if you choose not to fast forward the first commercial break, after “Lost On You,” you’ll see LP signing a large pile of posters, with a close-up on the ready signatures, with her hearts and stars taking all the shapes this universe recognizes.  The poster session is being constantly interrupted by fans asking LP to sign their… mobiles. And she does patiently, making sure the marker doesn’t smear and to pass the interesting souvenir intact to her fans. It’s quite mesmerizing to watch. We also tracked down one interesting tidbit for ourselves. At one point LP asks what song is playing in the background, and after learning it’s Galantis, she points out she has worked with them, but the song never got released. She didn’t share any details, but being familiar with LP’s collabs with DJs, especially the Swedish ones, we are going to keep crying our eyes out until the song sees the light of day.

The second part of the program is concluded with the performance of “Don’t Let Me Down” and a remark from the hosts that whistling in the room brings bad luck. If you keep watching the video after that part, you’ll see LP casually answering some questions from her fans in the studio, mainly about whom she has written for and whether she misses home. What really stole our hearts though is the nice, cozy feel to of the atmosphere between the tiny group of fans and LP. It’s really charming, nothing weird, nothing hysterical, just pure interest in the artist you follow. And the proper gift for a rockstar – a bottle. So cool. Cheers, guys! 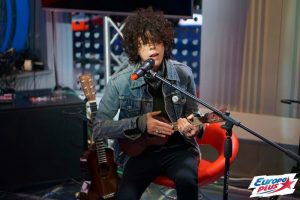 As for the songs, LP and JD performed one of our favorite “Don’t Let Me Down” renditions, right next to the Red Wall Sessions and UTB versions. Watching them work this unbelievably well re-written cover together is real pleasure. There’s something serene and soothing in the way they play together, despite the fierce delivery of the song itself. Elusive as hell, this sensation, once you start hunting it you fail miserably. But there is no denying, they used to be a beautiful match.

But getting back to the recording as a whole – below you will find a full transcript of the interview. It’s just a casual conversation about general topics, including the issue of her name, which she comments quite explicitly here.

Have a pleasant read / watch / listen!

LP: Priviet! I have 800 languages in my head right now.

EP: Do you speak Russian?

LP: I can say “spasibo”, I can say “dobry vecher.” What does that mean? Good evening! You have to say it like that, ‘cause it sounds like it should.

EP: A lot of musicians who come to us, ask how to say “I love you” from the scene. And we tell them “yellow blue bus” which sounds like Russian “ya lyublyu vas.”

LP: Ya lyublyu vas! I have “lyubov” in Russian on my arm!

EP: There will be a question about this from the listener. What’s the story of this tattoo? Cause Russian girls usually do Hindi or Chinese or other (inscriptions – editor’s note).

LP: Oh, I don’t know. I just came here a bunch of times and it was during a point in my career when I honestly didn’t know where the things are gonna go. But I just felt like I’ve got a lot of love for Russia. And it was a memorable time, one of these things that just kept me going in a darker period. Love is so universal, you never know where you’re going to find it.

EP: All Russian people are very pleased that you have the Russian letters on your arm.

LP: I do! I just got here. The weather is splendid, honestly, it’s fantastic. Well, it’s actually not as bad as I thought, I was freaking out. I was like, gee, I gotta get a bigger jacket… but, I don’t know, it feels okay. I grew up in the East Coast and it’s colder there. Now I live in Los Angeles and it’s warm there.

LP: All right, I’ll take your word for it.

EP: Shall we start the first song?

LP: Yes, my mom’s parents were from Napoli and my dad’s dad was from Palermo, Sicily.

LP: A little bit. I don’t know that much modern Italian music, more like old stuff.

EP: Mike Patton from Faith No More made the record from the Italian singers, it’s mainly the covers.

EP: Which music do you listen to in your free time?

LP: Oh, man. I have such a wide range… Like, in a day I’ll go from listening to Frank Sinatra to The Weeknd.

EP: Do you know anything from Russian music?

LP: I actually really don’t. I’m sorry to say. Not yet. I hope that I’m gonna discover, somehow.

EP: It’s like a huge cultural layer, which you can… You don’t have to discover everything, you know.

LP: “Do something for me – don’t discover too much.”

EP: Please, can you sing one more song?

EP: In Russia we say that if you [a girl] whistle, it’s a bad luck.

LP: I’ve heard about this! It explains the earthquake. I’m sorry. I apologize. It’s been good luck to me, so don’t worry.

EP: Where did you learn to whistle?

LP: I’ll tell you what. I did learn to whistle inside, that’s for damn sure.

EP: It’s a question from the listeners. Did that happen to you when you wrote a song for someone, gave it to someone, that you listened to someone singing it and were like: “damn, I should record it myself.”

LP: No, that never happened. What happened to me once, was that I wish I gave one of my songs to someone. Shakira had wanted one of my songs, and then, when my label heard it, they wanted me do it instead, ‘cause they thought it’s a hit song. I heard someone do a different version of it one time, not Shakira. But I felt that Shakira would have really nailed the song. It would have been sexier and cooler.

EP: Are there any interesting versions how did that happen that you are LP, not the simple version, that it’s your initials.

LP: Oh, it’s my initials. When I was first starting up in New York City, I was playing with the band. I was a teenager, I was waiting tables and there was another Laura that worked at the restaurant, so I’ve been called LP by a friend of mine when I was growing up and I always liked it. And then it became my stage name, my cool band name. And you know how nick names just stick and everybody starts doing it. And then it just became my name. And when people call me Laura, it’s not really… I don’t feel that it’s my name any more.

EP: Who is your supporting musician, on the acoustic guitar?

EP: Is he always that silent?

LP: He’s always that silent! Yeah, it’s amazing. He’s so fun to talk to! He really is. You get to talk the whole time and he’s like [nodding expression.] We call it resting sad face.

EP: Which other instrument do you play? Ukulele, guitar?

LP: I’d put harmonica to it.

LP: No, not the Stevie Wonder one, that’s way too complicated. He can’t even see, and he plays every instrument better than me. He’s a genius. He’d probably drive better than me, I bet. He does everything better than I would.

EP: Why don’t you play another song?

EP: A question from the listeners, about tonight’s show. Tickets sold out in one hour. Should we expect more Russian shows next year?

LP: Yes! Absolutely! I think so. I’ll be back in March/April and I’m sure… I hope so.

EP: Thank you so much for coming!

LP: Thank you so much!

EP: Have a great show tonight.

LP: Thank you so much, and thank you everybody for coming, thank you! That’s very cool. 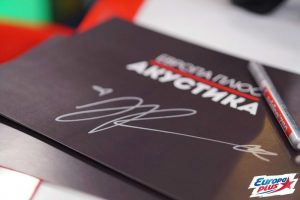 Veronica Tedderson, thank you for your help with the introduction part in Russian!

The video is the last part of the “Lost In Europe” series recorded in Europe in September of 2016, and released during the Lost In Europe tour a couple of months later. The initial three of the four part series are a video recap of LP’s shows in Milan, Paris and Athens, and the last one features quite a special narration by LP. END_OF_DOCUMENT_TOKEN_TO_BE_REPLACED

We have in mind a very particular performance, and it takes us back to a life-changing experience which the Smoke Em If You Got Em tour embodied for us. And even though we were quite dizzy from the number of wonders which were happening for us every day, the premiere of LP’s masterpiece, “Suspicion,” was one of the highlights of this unbelievable journey. END_OF_DOCUMENT_TOKEN_TO_BE_REPLACED

She talked to us a lot from the stage and we tried to capture as much as possible from the different videos recorded during the show. END_OF_DOCUMENT_TOKEN_TO_BE_REPLACED