LP’s music choices confirm what she usually says – that her taste is eclectic and she doesn’t keep away from any musical genre, which she does neither as a listener or as a songwriter, and which results in truly unique and mind-blowing writing skills and an artistic output embodied in a wide range of genres she can effortlessly compose for. (Starting from some, well, very old stuff, and ending with the recent, beautifully complex, “Suspicion” – LP’s writing talents are just stunning.) 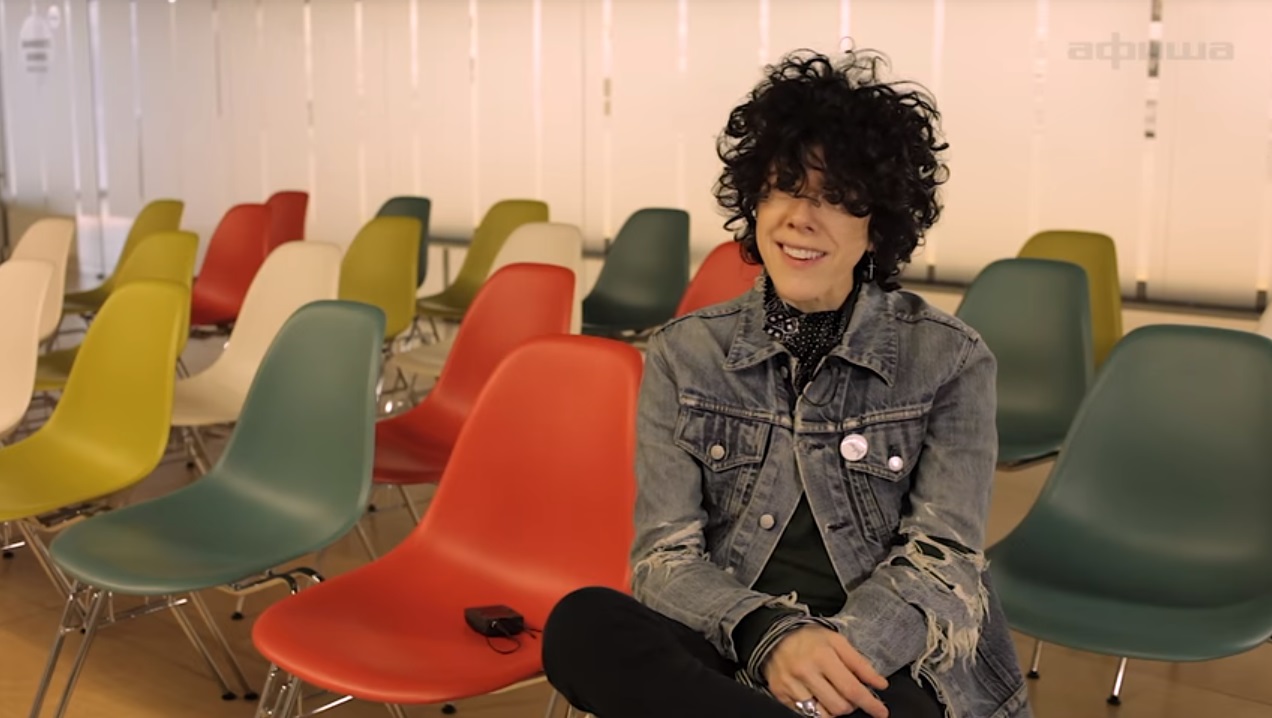 Still frame from the interview video

To have a closer look at LP’s music favorites, we transcribed an interview about her musical preferences, which she gave in Russia in December of 2016. Well, we must admit that Russians have their ways of extorting confessions from people – she gave them dozens of bands and names of singers, while she usually concludes the list at around three, maybe four examples tops. In the interview she mentions a lot of artists, but gives only a few titles to their songs (most of the videos edited into the interview are probably the interviewer’s choices.)

✶ Spotify playlist – LP’s favorite music assembled by us, based on interviews with LP

The artists who inspire me? When I was doing my record I listened to Paul Simon, some of his latest work, like post-Simon and Garfunkel. Roy Orbison. Jeff Buckley. And all kinds of stuff, I mean, I’m constantly listening to different kinds of music. Frank Sinatra. Also Father John Misty, the new one.

Hi, I’m LP and today I’m gonna talk to you about my music preferences and stuff that I like. I’ve always liked The Beatles, The Stones. I like Patti Smith, Aretha Franklin, Joni Mitchell. I like all the classic old stuff, but at the same time modern, I like The Killers, and also Edward Sharpe, it’s, like, eclectic, I can listen to The Kooks, or Cage The Elephant. My girlfriend is a great singer-songwriter, her name is Lauren Ruth Ward. I love her, and we inspire each other, we sing the whole time when we’re in the house, stuff like that. Trevor Menear, he was a guitar player of mine, and he’s an insanely great musician, he’s a blues guitarist musician, he’s online, you can find him on Spotify.

There’s just lots of bands around… Swanky Tunes, I love it, I met one of the Swanky Tunes, I’m very happy for them. I’m a Kanye fan, and of course Jay-Z, I mean hip-hop, right now, my favorite is The Weeknd. That’s like, I love his singing, I love his songs. The last record of The Weeknd, it’s great, “Starboy” is a great, great song.

Oh my god, my favorite music videos of all time… Well, you know, Nirvana, “Smells Like Teen Spirit”, it was kind of a mind-blowing moment. I like a video of Sigur Ros, I don’t remember the song title, it’s a video that featured two soccer playing kids, what was the title… Sigur Ros doesn’t have any lyrics, so you never know for sure… Also…geez, videos by other people… I like Lemonade by Beyonce, all the videos from it, they’re very beautiful.

You know, as they say, put your lips together and blow [whistles], and then like this [whistles]. You try it! There you go! You’ve almost got it! You only have to do it for hours and hours. Whenever I have a whistling competition, I whistle like [Mozart tune]. [Laughs] Yeah, I nearly choked, you nearly made me choke!

Some new pop stars… Do you know Tove Lo? She’s Swedish but insanely popular in the States. It’s written T-O-V-E L-O. She’s great, a real pop star. Ok, who else… Do you know Christine and the Queens? She’s a French artist. One of my favorite videos, it’s ‘Tilted’, that’s the song title, and it’s very beautiful, she a great singer and she’s an incredible dancer. So, there’s another great video for you. Well, I’d say, Florence from Florence and the Machine, that’s like our Stevie Nicks of today. For me, among the modern artists, she’s like, her voice is incredible and the shows are… you feel like you’re seeing something from the 1960-s. And then, Adele, as well. Adele reminds me more of, like, it’s almost as cool as Billie Holiday, or Etta James, something like that. They both are something from the past, but modern, too, I think it’s great.

I’ve always noticed Mark Ronson’s clothes, and I love the clothes of that guy from Arctic Monkeys. And if I chose from all of them, it’s David Bowie, with his thin… face. Also, the Strokes were always very cool. I remember, the Strokes, you know, the first band who ever got the interest of the New York city fashion world… people like that. Oh, yeah… I think it’s just the hair. With curly hair, you have a couple of choices: you can grow them long, cut them short, or else go midi. Me and Bob Dylan, we went midi. Oh, Milky Chance, of course, I love Milky Chance, yeah. I would like to challenge my friend Luke Pritchard, from The Kooks, you know them, right? An incredible band. Luke, tell us about your musical preferences. Do it!

Hey, I’m LP, and you just watched Afisha video! [laughs] It was like, “Ok, where do we go now? That sucked!”

Veronica Tedderson – thank you for the translation from Russian and for the English transcript of the interview!

✶ …and a little bonus from us & about us – our Spotify playlist: what the two of us listen to while writing

For us, the most intense and thrilling performance of “Don’t Let Me Down” by LP is the one she played for the Red Wall Sessions. Accompanied by Trevor Menear, she was featured as the very first guest of the show and here is a comment on her performance, taken from the FYI Television Network website: As soon as she opens her mouth, it’s clear she doesn’t sound like any other. Her strong vocals are a combo of rock and folk that’s hard to ignore. END_OF_DOCUMENT_TOKEN_TO_BE_REPLACED

When we first saw it, we were in awe for a couple of reasons. But truth be told, we’re not really sure how to write about this performance and not fall into a very bad writing trap, because some things are simply better off without any commentary or description. But, well, this performance is just too good. So this is just a light touch, nothing else would fit.  END_OF_DOCUMENT_TOKEN_TO_BE_REPLACED

Oh god, this album is SO GOOD, so exquisite. If you are in constant touch with this music, you just forget about it, and it becomes some kind of certainty of unknown origin. But take a break, maybe even one month will do, and then come back and be shocked all over again, exactly like it was the first time around. END_OF_DOCUMENT_TOKEN_TO_BE_REPLACED