It seems like this year’s festival season is over and is drawing the summer closed with it. You can see it in the colors, at least here in the Northern-ish part of Europe, and you can tell even by the smell of the air. We tried to experience all that these last few balmy months had to offer as much as we could, highlighted by going to a few of LP’s shows. One word: magic. And it was again such a busy time for her, as she played thirty dates this time, and with such a finale! She concluded the season with a big bang, singing two damned difficult songs in Italian (and one in Greek!) in front of a 200,000 strong crowd in Melpignano during La Notte della Taranta, leaving her Italian fans in tears and everyone else touched just as much (all of which happened right after the first line of “Vorrei volare.”) If you haven’t seen that performance, you missed one of the most moving moments in music this year. Catch up. 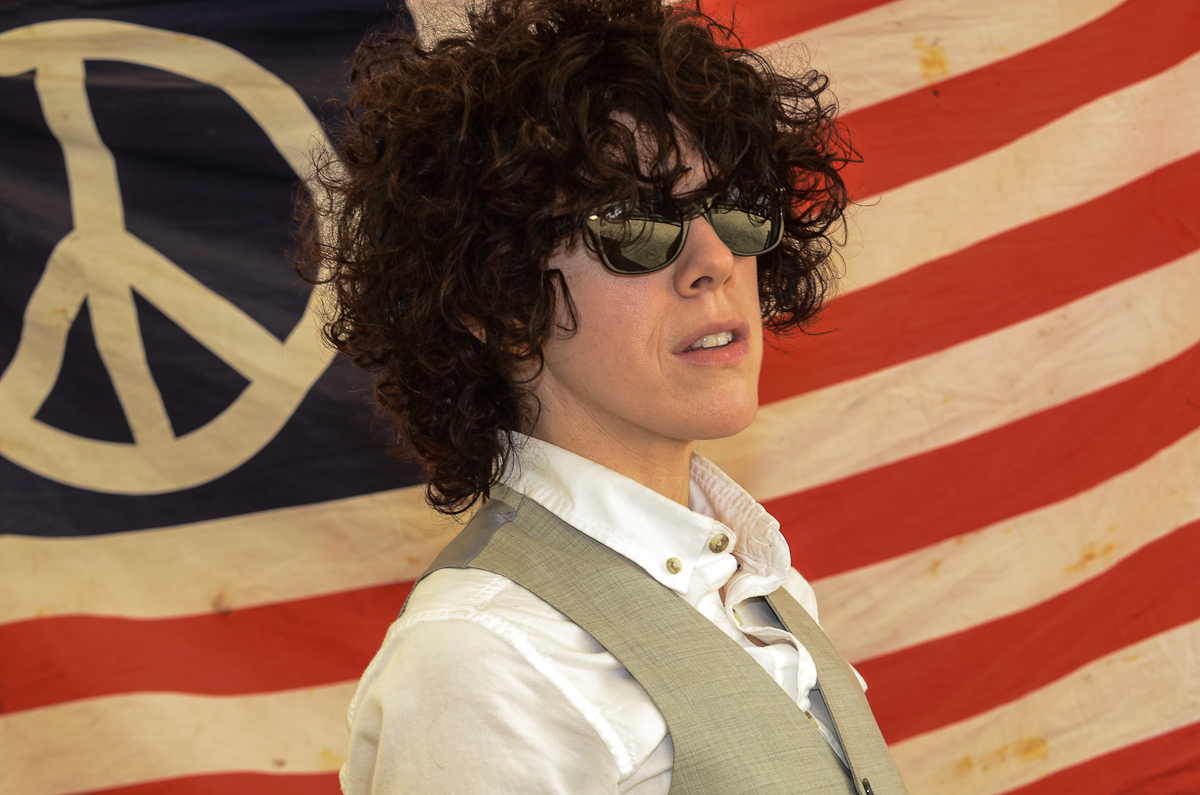 LP at Bonnaroo in 2012. © Tom Stone for The Rolling Stone, courtesy of the author

The last two summers, or perhaps even three, LP spent playing mostly in Europe, but before “Lost On You” landed on the European charts in 2016, she had spent a couple of her summers playing a whole range of different American festivals and events. And, in fact, her very first festival season, when she had her first opportunity to play for some really big audiences, was in 2012, right after the release of the Into The Wild live EP.  She basically jumped from the tiny stages of the Hollywood clubs she played casually during her exclusive songwriting years, straight onto the huge open air festival stages, playing just next to Radiohead or the Red Hot Chilli Peppers. It must have been quite an experience for her, as even though she had been touring the US constantly in the early 2000s as an indie artist, her shows back then were just a completely different thing.

Mid 2012 was one of those interesting moments in LP’s career, kind of the golden age of her Warner Bros. era. You can really see the push behind her Into The Wild EP and the success of the title song which came together with the CitiBank commercial. LP was being spoken of by everyone and the atmosphere around her was really hot. She didn’t always play the main stages, but all the critics and reviewers kept distinguishing her as one of the biggest discoveries and an actual highlight of each event. They were shocked, primarily by her unbelievable vocal range and captivating performances, but also by her songs. And so, by the end of that 2012 summer she was basically a rising star of the American indie scene. (Wouldn’t that be great if the label followed LP’s instincts and released that almost ready Forever For Now album right then and there, when all those craving eyes were on her, and not two years later…)

This vibe in all its facets is really nicely and intensely detectable in an interview she gave during the 2012 Bonnaroo to KINK radio. Steve Pringle and LP talk over the vibe of the festival, LP’s musical background and her plans for the rest of the year. She comments on her very first experiences with big crowds and how she perceives the energy generated by this kind of audience. Through the hesitant way she speaks, you can feel that this is all new and a bit mysterious to her. We are really fond of this interview, even though there are so many other LP Bonnaroo prestigious media appearances to choose from, including video interviews for Billboard and The American Songwriter. But still, the KINK interview stands out, it somehow feels deeply authentic, warm and a tiny bit touching, even. You will see what we mean once you hear it. So don’t just stop at reading the transcript we have for you below, but also go and play yourselves the file. Chances are, you’ll love it.

Steve Pringle: 101.9 KINK. We are live at Bonnaroo and I’ve got up and coming artist that is just tearing everybody up. I’ve got LP with me. You’ve just done two shows here at Bonnaroo, right?

SP: And we had the big stage too, how did that go, everything well?

LP: It went amazing! The energy was incredible, I really enjoyed it.

SP: What’s it like now to be doing that? Is this your first time doing sizes of crowds as big?

LP: It is, it’s really nice. It’s incredible to see, as you’re playing, the crowd gets a little bigger and a little more frantic. And it’s nice. It’s a good gauge, because people are really here to hear music.

LP: And it’s not… You’re not necessarily catching someone after someone else’s set. Or you might be, but they’re still very receptive to new music and new stuff. Maybe like hearing it from the friend or whatever. And they’re here anyway.

SP: And that’s what it is! They’re here for a good time and when they do get to discover the new music and you’re up there, you gotta feed off that energy.

SP: Very cool. How did you come up with music?

LP: I was doing the artist thing, touring in the indie style with a band in a van. Then I got signed to a major label and I was on it for a couple of years. I wrote a ton of songs, my record never came out, but I kind of got this thirst, this lust for a songwriting. So then I just kept writing and writing for other artists and then through that I kind of… I was just having a good time and I just started doing my own stuff and then people started to come round and I started doing the artist thing again and it’s been really cool.

SP: So not only LP, but I also met JP, too. Who are these other folks in your band?

LP: It’s JP on bass, it’s Joey on keys, Josh on guitar, Amir on violin and Fernando on drums.

SP: How long has that been?

SP: Oh, okay, so everybody is kind of enjoying each other’s vibe and getting to know each other.

SP: All right, so you’re the band leader on stage, how does this work?

SP: I guess I don’t wanna put you in that category, throwing the leader thing.

SP: Very cool. So everywhere I’m reading, man, I see you in Rolling Stone, in everything else, your name is definitely coming up. Where about in the tour are you with Bonnaroo now?

LP: We are. Yes. But not at Bonnaroo.

SP: So you’re gonna be coming to Portland, we’re gonna see you in the Longue, very cool. Have you been up to the North-West, have you done Portland?

LP: I’ve never done Portland, I was actually in Seattle for the first time ever a few weeks ago.

LP: I’ve heard so much great things about it, but I’ve just never made it up there, ‘cause it’s quite a bit far away from LA, where we usually play.

SP: So where was?

SP: Oh, very cool! There are huge differences with everybody else from New York to Los Angeles and music-wise, for your music, more independent scene. What was that difference?

LP: Again, I just fell back into it, I don’t know really why was it any different. It’s just a really cool scene happening right now in LA. It’s very laid back, but cool. I almost feel like LA is one big festival, everybody is chilling and going to see bands. And there’s a lot of love of new music and indie music happening in LA, it’s really cool.

SP: It’s good to feed off of that as well.

LP: It’s second time in a row someone said that LA is reminding them, and I heard it from two different people, it’s reminding them of Berlin in the early 2000s, which I thought was funny. I have no reference, I don’t know, I wasn’t in Berlin, but that sounds kind of cool to me.

SP: Yeah, that is cool. So who is on your little list to see?

LP: Well, it’s kind of last minute, but I’m looking for the Chili Peppers tonight. I wish we were here last night, ‘cause I really would have liked to see Radiohead and Feist.

SP: It was awesome.

LP: And I missed them at Coachella too, because I had a show the night of Coachella I was there, I was there a night before Coachella, so it’s like they’re leading me on…

SP: I’ve got this crazy thing too, because all the interviews that I’ve been able to do, there was one person I just haven’t gotten close to and he’s playing at midnight tonight, after the Peppers, it’s Alice Cooper. Isn’t that stupid kind of thing?

SP: At 28 years I wanted a boa constrictor because of that freak.

SP: So I’ve got a lot of things to blame on him and I’d love to tell him that.

SP: It is so cool meeting you and seeing you, ‘cause it’s been nothing but pictures and reading about you, but I just haven’t got to meet you and can’t wait to see you in Bing Lounge.

SP: And very cool, appreciate it. LP with us here at Kink.

✶ Bonnaroo – one of the most important music festivals in the US, taking place yearly since 2002 in Manchester, Tennessee. Each edition lasts for four days, and from noon till almost dawn bands and artists of different genres play on multiple stages located in the fields. The crowds are usually about 80,000 (reaching a record of over 100,000 in 2012).

✶ Steve Pringle – KINK’s Radio music journalist. The interview held during 2012 Bonnaroo was their first meeting and then they met again in early 2017, during LP’s American radio tour.

✶ Here are some videos of LP performing during Bonnaroo in 2012:

✶ A little rarity, a snippet of LP performing in the Bonnaroo media area

✶ La Notte della Taranta – a folk festival held in Apulia in Italy, one of the biggest and most prominent folk festivals in Europe. It’s focused on Pizzica, a folk genre popular in the Apulia region.

For the last few months, we have been repeating that “Muddy Waters” is oh-so-great choice for the opening song for zillions of reasons, including the suspicious procedure of casting the spell and entrancing the audience. Well, this is all true, but in London LP made us blush as we realized that it’s not about “Muddy Waters” as such, and it never has been, it’s simply about herself. END_OF_DOCUMENT_TOKEN_TO_BE_REPLACED

To be perfectly honest, the beginning of May 2017 was definitely not a time when we were expecting any surprises from LP. It was – we thought – her two week break between having just concluded her European tour and the opening of her, much anticipated, American tour. END_OF_DOCUMENT_TOKEN_TO_BE_REPLACED

Take your earphones, close your eyes and fly away. END_OF_DOCUMENT_TOKEN_TO_BE_REPLACED