Today we’ve got a special LP concert for you! It’s a video of a 40-minute long gig she played in 2012. We also prepared a full transcript of what was said during the show. The event is called Warner Bros. Summer Sessions, and it took place right after LP signed to Warner Bros. The sound on the recording is not of great quality, especially the first half of the concert, but we hope you’ll enjoy it nonetheless. 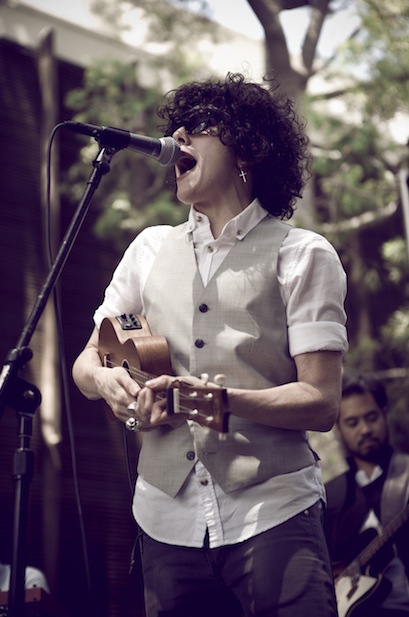 © Jill Augusto, courtesy of the author

We absolutely love this video, and LP is flawless in her singing as always, but what particularly caught our attention were her comments between songs. Check it out & have fun! Important: the concert starts at 22:03 of the recording, so go ahead and fast forward to it.

Livia: Hi everybody. Hi, I’m Livia, welcome to our second annual Warner Bros. Summer Sessions series. Thanks everybody. We’re gonna have an amazing year performances, we have an amazing release schedule, we’re super excited. I wanna thank our sponsors this year – Express and Heineken, thank you for your support. Also, every event is gonna be streamed live by the Warner Sounds, you’ll be able to see this on YouTube, so we’re really excited about that as well. And I wanna thank the Artist Development team for all their work. You know, putting this together. So let’s – let’s hear it for them. Cool, all right. So I’m gonna welcome Jeff Fenster to the stage to introduce our first artist.

And a little over six years ago I heard one of those voices for the first time. And that was LP. My good friend Billy Steinberg, the amazing songwriter, was one of first people I talked to about LP and he’s here with us today somewhere, so I wanna acknowledge Billy cause he’s a part of this story. And, anyway, that wasn’t the right time for the world to hear LP as an artist and she turned to songwriting in recent years and writing for other people and her incredible talent as a songwriter allowed her to be a real success doing that. But at some point last year she was kinda convinced to go back into performing her original material. I was lucky enough that a friend of mine told me that she was doing show at Soho House here. And I went to that show and literally the second that I saw LP I knew that this was the time for her and this is the time for us to work together. And that the world was ready to become a more interesting and exciting place by means of LP’s music.

When we brought her in to A&R meeting for the first time and played her music people here got it immediately and fell in love immediately. Rob became an instant huge fan and is gonna produce LP’s record. And I think it’s just the most moving and I’m really honored to introduce this artist. This in an artist that we’re going to break, Warner Bros. Records is going to break. And we’re going to do that because when the music is that great, when the talent is that great, when songs are that great, and when you have an incredible team, which we have of all the people in Warnes Bros. here, who are working on project, you know, led by Ester (?) and everyone else that’s involved. When you have a great management team, you know, Rebel One, Mark and Mike of course, and Zsuzsa and everybody… The world will take notice and we’re not gonna stop until everyone does. Ladies and gentlemen: LP!

LP: I’m a little bit clamped, my god! That’s pretty nice, I had a drink of beer. Sorry. The song is called “Levitator.”

LP: Thank you so much. Oh yeah. Sitting in the room for a long time. Levitating.

LP: Thank you. Thank you so much. I just wanna thank Warner Bros. so much for everything, I mean, I don’t even know… I won’t even say it, cause it’s been amazing, walking in this building. You know, I’ve had some record deals in my life and sometimes no one’s even know my name except the one person who signed me. And, yeah. Well, that happens, you know. But anyway, it’s been a really beautiful experience here and moment that I would wish for any artist, you know. It’s awesome.

LP: This next song is written with someone who I have called a mentor, his name is Billy Steinberg. And Josh Alexander, who is an amazing producer and songwriter. And Billy and I go way back as far as me and Fenster obviously, and if you don’t know some of his songs, I mean, you do know most of his songs. He wrote “Like a Virgin,” he wrote “True Colors,” he wrote “Alone” by Heart, he wrote “Stand By Me” [LP meant here “I’ll Stand By You” – editor’s note,] he wrote “I Touch Myself,” he wrote… and I do, and… he wrote many others that are amazing. Who doesn’t? I mean, you know. Anyway, if you don’t, you’re a liar. But it’s all good. Anyway. So. He’s amazing. And he’s always, like, stuck with me and we’ve always written for different people and for me. We wrote this song and everybody was really digging it. So, it’s called “Salvation” and I’m really honored and happy to play it.

LP: Thank you. That’s Billy and Josh. Hold, o-oh.… Can I have that bag? It’s my racquetball. So pro… So how are you guys going? Doing… going… Thank you so much for – I see so many of my cool friends, my busy, lock-themselves-in-a-room-all-day-and-write-hit-smashes up in here. Thank you for taking time out your day for me, I really appreciate it. Hell yes! Any time, man! I’ll be drinking beers – ok! All right. This song is called “Fighting With Myself” and it’s, it’s born of, like, pretty sticky situation. I’ll tell you about it some time.

LP: So, Bob, you’re right, they do know all the songs! Bob who owns rehearsing studio told me his kids know all the songs, and they know all the songs. Better than I do. This song is a… I think you guys might know it and it’s had a little journey. It’s been going on its own journey as if it’s like you know, it’s feeling itself. It’s just gonna do whatever it wants, you know. And I’ve been, like, pleasantly, very pleasantly surprised at what’s going on for it and I… And it’s really fun to play shows in front of people that think they know me or don’t know me at all and then get to this line and everyone goes like: “Ooooh, that’s in the commercial! I know this song! I’m making my boyfriend marry me because of this song! You don’t take me climbing, rock climbing! And you don’t buy me things. Is that what it takes?” That’s what it takes.

LP: Thank you so much, you guys. We really appreciate it. I don’t know if we have time for one more, but we thought maybe we’ll do like a little, a little summer thing. Just for fun. We’re experimenting with this one. It’s called “Wanted.” I just heard some interesting news about it, but, it’s cool. It’s a summertime thing, you need to get a drink.

✶ Jeff Fenster – vice-president of Warner Bros at the time, responsible for searching for new talents and promoting them. He participated in the discovery of Britney Spears, the Backstreet Boys, Whitney Houston, and Aretha Franklin. He offered LP a contract after he saw her in the Soho Club in 2011, when she performed “Someday”’.

✶ Billy Steinberg – American songwriter. He co-wrote, with Tom Kelly, such hit songs as “Like a Virgin” (Madonna) and “True Colors” (Cyndi Lauper). Together, with LP, he composed two songs that appeared on her Forever For Now album: “Salvation” and “Savannah”.

✶ Josh Alexander – American songwriter and producer, often cooperating with Billy Steinberg. Together with LP he composed “Salvation” and “Savannah” for her album, Forever For Now.

SHE RAISED THE SKY OF OŚWIĘCIM

Knock, knock, knock! Guests are there!
Gate, open up to welcome them!

END_OF_DOCUMENT_TOKEN_TO_BE_REPLACED

THE QUEEN OF THE NIGHT

All right, let’s get to it, shall we?  END_OF_DOCUMENT_TOKEN_TO_BE_REPLACED

LP wrote this song with her mentor, Billy Steinberg, alongside Billy’s long-time songwriting partner, Josh Alexander. It could have happened around 2011, when LP was writing songs for her then upcoming record, Forever For Now. They were collaborating extensively back then, as they also wrote “Savannah” and “Salvation” together, each of which made it onto the album (and also “Magic,” which will appear on the deluxe version.) END_OF_DOCUMENT_TOKEN_TO_BE_REPLACED