In June of 2014, LP was invited by Forbes to perform on the rooftop of their old headquarters on Fifth Avenue in Manhattan, NYC. The event was a part of The Forbes Concert Series, a set of performances taking place in different parts of the building. Apart from LP playing there, the series included, for example, the billionaire, Warren Buffett, teaming up with Jon Bon Jovi for a charity ukulele duet. 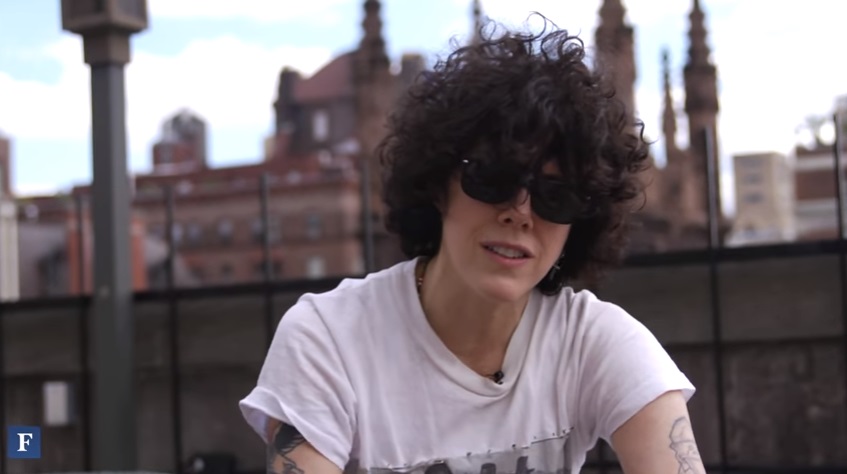 Still frame from the interview for Forbes

LP played a couple of songs there, “Into The Wild” and “Tokyo Sunrise.” She was supported by her guitarist, Tim Fagan, playing on the twelve-string guitar and the drummer, Aaron Steele. It was a truly acoustic set, but it apparently needed some upgrade in the form of some cloth for better sound on the drum (or something).  And about the performance – it is actually a rarity, and that is due to other reasons than singing on a rooftop. In the interview given to Forbes, she said that her album is kind of uplifting, with a big sound and the big choruses. But watch her perform “Into The Wild” there. What she did at Forbes is almost like her 2017-way-of-singing, so much more toned and softer than how she used to play it back then. We know that, in fact, she wasn’t happy with the album versions that were recorded for the Forever For Now album, as she explained later a good number of times. She liked the raw versions of those songs much better, just like they were recorded two years earlier for the EP “Into The Wild – Live At EastWest Studios.” Therefore, this kind of a live version of “Into The Wild” from the Forever For Now era is surprising, and we really love it.

The whole performance is, of course, dope – the wind in the mic, the blue skies with those freaking cliché clouds, as if they were taken from Monet’s Hôtel des Roches Noires painting. Yeah, and her, hitting every note flawlessly, we’re starting to become boring here. You’ll have a good watch, that’s for sure. Oh, and you’ll find the transcript of the interview below, so you won’t miss a thing.

✶ Video: “Into The Wild” live from The Forbes rooftop

Zack O’Malley Greenburg: You got you start writing for acts that have a very different sound from you: Backstreet Boys, Rihanna and so on. But your big break for your solo career came with a really unorthodox kind of project, which is a song that got picked up by a bank, right? Tell me how that came about.

LP: It was just like anything else. I’ve gotten so many of those kinds of calls for songs, like, “you’re song’s up for this or that” and it never materializes, so I never thought about it. Then they were like, “oh, it’s down to five songs now,” “three songs,” “it’s your song.” And then they played it for me, or my publisher sent it to me. And I was like, “Oh man, they didn’t even use the chorus.” They used the pre-chorus. I was like, “oh, that’s cool.” It’s nice to get something and I didn’t expect anything at all from it, and then it just kind of went viral.

ZOG: I think it’s fixed the way the music that this is going [?]. It’s not like the label is necessarily the only way of getting your message out, right?

ZOG: Do you think that kind of a model – not necessarily bank commercials, but corporation’s funding or patron of the art kind of project – do you think we’ll see more of that?

LP: I think so, yeah. I think we’re seeing more of it. I think it’s just inevitable. We receive information very differently now. Like when you’re on YouTube with all the ads and you start seeing things. Or you can be just on Gmail and things are popping up. I think it’s a good thing.

ZOG: I think the idea of selling out has changed. It’s not selling out if you just have a great way of getting the music out there.

LP: Yeah. I think the only selling out thing might be… and even then… it’s when people’s prerogative… if you’re huge and you’re still selling to a certain things. That’s if you think it’s cheapening your music. I still don’t think it is. I’ll watch your car commercial with Beatles song, I don’t care.

ZOG: Tell me about the new album.

LP: It’s called Forever For Now. It’s a full-on studio record. It’s got four songs from the EP. It’s all right, it’s good. It’s uplifting, kinda big songs, big choruses. You know, pop record. I’m a pop writer. I mean I do all kinds of stuff, I can do folky stuff too, but this record is… I wanted to do a full bells and whistles record. And I did.

✶ Tim Fagan – an American singer-songwriter and guitarist. Tim released two studio albums: Whirlpool (2004) and Tim Fagan (2011), and an EP Out Of The Dark (2006). He was LP’s guitarist around 2014, playing with her during her Forever For Now promo.

✶ Click here for nice interview with Tim, where he talks about his songwriting

And so, if you choose not to fast forward the first commercial break, after “Lost On You,” you’ll see LP signing a large pile of posters, with a close-up on the ready signatures, with her hearts and stars taking all the shapes this universe recognizes.  END_OF_DOCUMENT_TOKEN_TO_BE_REPLACED

LP’s tour-opening show in Stockholm, we watched from the front row. For the tour-closing concert, we chose quite the opposite perspective: the top-most balcony with a perfect view of the entire stage. No close ups – true. No eye contact – true again. No chance to see any of those delightful details – alas. But this time we came for the full picture, with no distractions. END_OF_DOCUMENT_TOKEN_TO_BE_REPLACED

This second interview, that we post today, does exactly the same, and it concerns exactly the same subjects. Watching it one after another is the closest you can get to time traveling, a kind of fast forward from August to October.  END_OF_DOCUMENT_TOKEN_TO_BE_REPLACED