Recently, we came across the Fuse TV channel and their cross-sectional interview with LP conducted during the Lollapalooza Festival in Chicago in 2012. (Remember the evacuation story?) LP chats briefly about some current events in her life, and since it was a very busy time for her, we get a lot of her casual comments on what was going on. The biggest thing on her plate was, quite likely, shooting the video for “Into The Wild” in the desert in California. 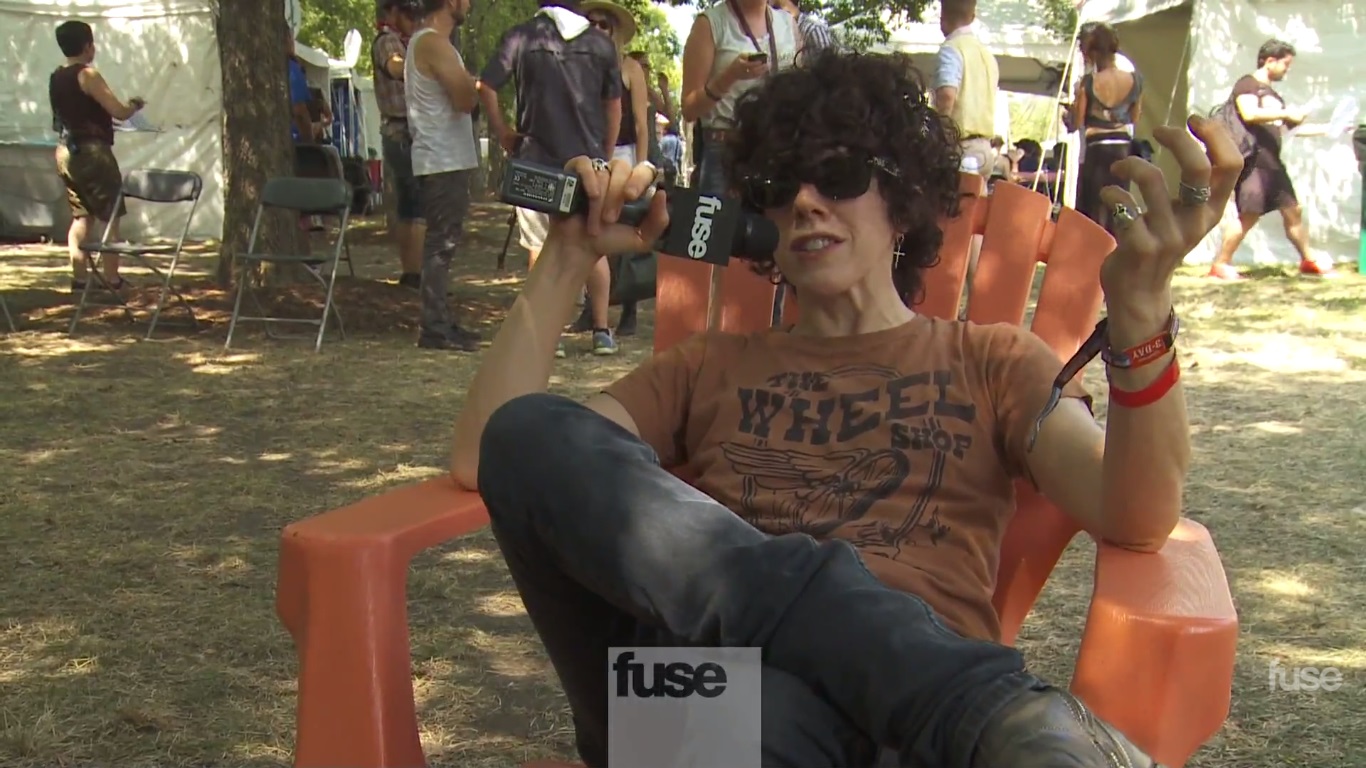 Still frame from Fuse TV interview with LP during Lollapalooza

Other than that, she’s working with Rob Cavallo on what is going to be (in two years…) the Forever For Now album. She’s touring extensively, promoting her Into The Wild EP, and she’s recording songs for her ukulele cover series (and explains why “Creep” didn’t make the cut). And she’s writing songs for other people (and speaks about her by-gone approach to it.) We get to glance over this vibrant time of her life thanks to Fuse TV, who interviewed her for their series of conversations with Lollapalooza performers. And, last but not least, there’s also a cool The Wheel Shop t-shirt to look at.

LP: Yeah, I recently shot a video for my song “Into The Wild.” And it’s kind of loosely based on the Thelma and Louise thing. I’m not there, but I’m the spirit guide of the situation. So it’s kinda cool. Shot out in the desert. Just a beautiful landscape, you know. And the song is about the exact opposite of what is sounds like it’s about, which is on purpose. I’m kind of down with that.

/ Fuse: LP on working with Rob Cavallo on the new album /

LP: I try not to be intimidated. I try to get the most out of it. I feel like Rob is just a legendary character who’s got so much musical knowledge that you could benefit from. So I just try to learn and watch. I try to guide it for my own artistic integrity. ‘Cause he needs me like I need him. We need each other to make something truly original. We’re making a record right now. We only did one song so far, but we’re working on three more right now and then some more in the fall. Our approach is we wanted timeless, big, epic sounds, reminiscent of a bunch of things, like old U2 of the Joshua Tree era. Roy Orbison – like the big, large sounds and a lot of space, and big drums, giving my vocal a lot of room to soar.

LP: I recently opened up for Sheryl and she’s amazing. We didn’t really get to sit down, I only did one show. But I was just really struck by her musicality. You forget how many songs you know of hers and how gifted she is. She’s written and produced a lot her own stuff and they’re lasting songs that you remember and that will be around for a while. I was really impressed by her voice as well. I knew she was a great singer, but her execution is pretty spot on. Her whole range is really, really cool to watch.

/ Fuse: LP on writing for other artists /

LP: I approach writing for other people differently than myself, because I try to read into what I think they experiences are. I remember I wrote something for Leona Lewis when when she wasn’t there, and I remember when I was writing for her, she had this really bad break up from a long term relationship, and so had I, and I think I wrote it thinking that she was feeling a certain way. And I found out she really wasn’t. She was kind of over it. I don’t want to give her stuff away, but she was better at it then I was, I guess. And I’d been like: “She’s gonna get this, man, she’s really gonna get it!” And she was a lot… a way stronger. She seems so vulnerable, but she was stronger than I thought, as far as off the situation

LP: I’ve been doing the series. I was actually gonna do “Creep” on a ukulele, but I felt like it needed…  It’s so instrumental and I feel, as a singer, I kinda surf the wave of that song musically I and felt like the ukulele was just a little too thin for it. It’s nice sometimes, I did one that’s coming out, it’s Mars Volta tune, and of course you could say the same thing about that, but I felt like that lent itself a little bit better. There are certain songs that I just didn’t feel like singing as well with the ukulele. In rock music? I don’t know. Maybe. I would say, a lot of people say there’s plenty, but I don’t know. There’s always room for more ukulele music. I think the ukulele is just another type of guitar. It’s just a little bit of a different sound, it’s obviously a lot less sustain. It depends on the way you play it. It doesn’t have to be shuffle Hawaiian thing. I don’t really play that way.

✶ Lollapalooza – an annual music festival, organized in a different part of the world each year. In 2012, it took place in Chicago, and LP played at the festival on August 4th.

✶ Ukulele cover series: a series of three video covers LP played on her ukulele:
“In The Pines” – Leadbelly cover
“The Widow” – The Mars Volta cover
“Something” – The Beatles cover

✶ Opening for Sheryl Crow – LP opened for Sheryl at the Humphreys Concerts By the Bay in San Diego on July 27th, 2012.

For us, the most intense and thrilling performance of “Don’t Let Me Down” by LP is the one she played for the Red Wall Sessions. Accompanied by Trevor Menear, she was featured as the very first guest of the show and here is a comment on her performance, taken from the FYI Television Network website: As soon as she opens her mouth, it’s clear she doesn’t sound like any other. Her strong vocals are a combo of rock and folk that’s hard to ignore. END_OF_DOCUMENT_TOKEN_TO_BE_REPLACED

The title of The Veronicas’ third album, then to-be-released, was Life on Mars. It was mid-2012 when it became obvious to everybody that it was going to take another minute to put it out, and so they decided to release a teaser single, a song called “Lolita.” END_OF_DOCUMENT_TOKEN_TO_BE_REPLACED

LP wrote this song with her mentor, Billy Steinberg, alongside Billy’s long-time songwriting partner, Josh Alexander. It could have happened around 2011, when LP was writing songs for her then upcoming record, Forever For Now. They were collaborating extensively back then, as they also wrote “Savannah” and “Salvation” together, each of which made it onto the album (and also “Magic,” which will appear on the deluxe version.) END_OF_DOCUMENT_TOKEN_TO_BE_REPLACED