Koko. A stunning London club, a small theatre with countless balconies, all in red and gold, richly decorated with stucco frescoes. Amy Winehouse’s favorite club to play in. An extravagant place. When we heard LP was going to play there, we instantly knew we’d have to be there too. And so we left our lives for a little while, once again, and pilgrimaged to London to see yet another show of hers, the final Smoke Em If You Got Em gig. We’d already seen a bunch of her concerts during her European tournée, each one of them growing more and more intense, emotional, powerful as time went on. So were we ready for what was about to happen in Koko? 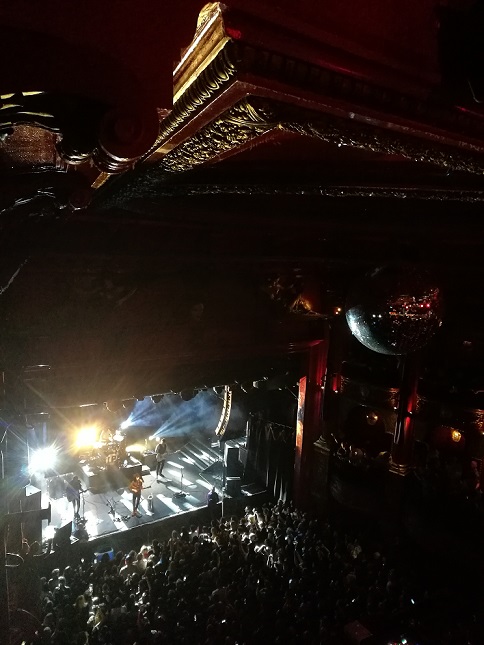 LP’s tour-opening show in Stockholm, we watched from the front row. For the tour-closing concert, we chose quite the opposite perspective: the top-most balcony with a perfect view of the entire stage. No close ups – true. No eye contact – true again. No chance to see any of those delightful details – alas. But this time we came for the full picture, with no distractions.

The dark sound of drums and choir in the very first notes of “Muddy Waters” filled the room with both anxiety and excitement. As LP entered the stage, the audience cheered, but very soon went completely silent, in order to listen carefully to the first tones of this magnificent song. She started singing with a deep voice, with this characteristically ravishing sharp filter she uses, enchanting us right then and there. What a perfect song to open the evening and to capture everyone’s attention – not only of her devoted fans, but of each and every single person in the audience. “Muddy Waters” sounded a bit different during the previous tour, Lost In Europe. The new arrangement for this tour was even darker, letting us discover new details in this absolutely amazing composition.

And right after the last tones of it had faded, we knew what was to come – the very first notes of “Strange,” sung with her high-pitched voice, making us close our eyes and stand with bated breath. She did it flawlessly. And so we sung with her, we clapped our hands with her, we swayed. She greeted London afterwards, saying, “Oh my God, London! What’s up! Thank you so much for coming.” And then she laughed and started singing “Tightrope.” But what a “Tightrope” performance it was! She was so focused, so engaged, so unencumbered. At the very end, she grabbed the mic stand and, playing with it, finished the song. Remember those videos of her performing in Sayers and Bardot? Yeah. Those vibes.

“Up Against Me,” “Other People,” and “Death Valley“ were a smooth trio, with an outstanding solo guitar in “Other People,” played by JD Carrera. It was probably the best solo of his we had ever heard, with a beautiful deep sound reminiscent of Gilmour and Steve Morse. As always, LP took her time for a thorough guitar tuning and then explained the release of her new record a bit before starting to sing “Switchblade” in the most tender and beautiful manner. And then she surprised us with the first notes of  “You Want It All…” Good thing it stayed next to “Switchblade,” letting the audience immerse into this very intimate atmosphere for not one, but two songs. There was longing, calling, loneliness in them. And during “You Want It All,” she created it all in spite of her lack of the ukulele, which she always plays, but this time, for some reason, she forgot to tune it and she put it down right at the beginning of the song. She hesitated for a split second on what to do and then decided to go on with the song. And so she went with the flow, with her hands free, making this performance improvised, and hence, one-off. When the time for here solo ukulele performance came, it was JD who played it for her on his electric guitar. In a moment like this, one truly realizes the beautiful power of music played live, the act of creation, here and now. And the connection between those two was no surprise for us, as we’d already seen it during an acoustic concert in Warsaw.

Again, as in Stockholm, “Levitator” was sung in almost the same characteristic color of voice as it was recorded for her album, Forever For Now. It’s definitely one of our favorite songs on this record, precisely because of the sound of her vocals, which are way better produced for it than for most of her other songs therein. Hearing “Levitator” live again, sung so note-perfect, was uplifting and soothing after what LP had done to her audience with two previous songs. And so, after we had been healed a little bit and we had let our guard down, only then she was ready to take us high again. But before she did it, she said, “What a beautiful place! I’ve heard a lot about this place before I saw it. Unbelievable.” Indeed.

And then the band started playing LP’s new song, “Suspicion.” We could first hear it in Geneva, sung so confidently right from the start, so freely as though she had performed it a hundred times before. In Koko she simply repeated that perfection. There’s a lot of drama to this oh so complex and beautiful song. She accentuated this by grasping the mic stand with both hands and singing most of the lyrics with her eyes tightly shut. It seems that she became somehow possessed by this song, dare we say, as if she had been waiting to write it for her whole life. Even from the highest balcony we couldn’t take our eyes off of her.

Soon after, there came something to wait for – “Tokyo Sunrise,” LP’s signature song, accompanied by JD on a twelve-string guitar. She put her arm on the mic stand, lowered her head, and before she started singing she stood still for a few moments. A tiny thing, but we froze. And we are still wondering how such a small, innocent gesture could have such a powerful effect. After the final “I’ll see you again…” she kept on singing, improvising for a longer while, showing off those crystal clear ornamentations. And she didn’t stop there. She kept us on our toes, fully engaged, as she started singing “No Witness.” She did it in such a way as it’s safe to say she outdid herself. She kept grabbing the mic stand, teasing us all, while she was taking the song to its peak. And who knew what was coming at the very end of it? We took a deep, collective gasp when we heard Eli Logothetis’s drums playing at a fast pace just before the last chorus. LP knows she owns the stage, and she owns each and every soul in the audience, during these closing four “Oh oh oh bear me no witness” lines.

And she took the tension even further from there with another new song, “When We’re High,” one of her most interesting compositions. Its America-meets-Asia character is intriguing and intensely seductive. It was premiered a week or so before the Koko show at Salle Pleyel in Paris. During those ten days, between the shows in Paris and London, she had mastered it to a point where there were no longer any inhibitions, not anymore. Vocally or performance-wise. And, yes, there are videos of this song from the Koko show available online. You might wanna check them out.

“Suspicion” – “Tokyo Sunrise” – “No Witness” – “When We’re High” stole the show. We stood there on our top balcony with our jaws sitting firmly in our laps, letting “Someday” (dedicated in Koko for Isa Machine, the co-writer of this song) calm us down. Then LP said “Yes!” and everybody cheered when the first notes of the famous bass line of “Lost On You,” played by Brian Stanley, filled the room. She sang it beautifully, caring for each line, harmonizing a bit in the very last chorus. She finished the show with perfect vocal and ukulele in “Forever For Now” and finally with an energetic “Into The Wild,” leaving us with this sudden thought that it’s over – the show and the tour. We left the stunning Koko club, feeling both joy and heartache, missing every bit of it all from the moment she left the stage, missing it more and more every day now.

✶ JD (J David Carrera) – an LA-based guitarist. JD accompanied LP from her 2016 summer European promo tours, up until the end of her 2017 Summer European tour.

✶ Brian Stanley – an LA-based bass player and singer. Brian has played with LP since 2015.

✶ Elias Logothetis – an LA-based drummer. Eli played with LP from the beginning of 2017 until the end of her 2018 Summer European tour.

And so, if you choose not to fast forward the first commercial break, after “Lost On You,” you’ll see LP signing a large pile of posters, with a close-up on the ready signatures, with her hearts and stars taking all the shapes this universe recognizes.  END_OF_DOCUMENT_TOKEN_TO_BE_REPLACED

You may already know this song from live performances. It’s called “Road To Ruin” and it was included as the 13th song on the Japanese version of the album. According to info on Wikipedia, LP wrote “Road To Ruin” together with Isa Summers, but we couldn’t cross-check it with any other source, so we’re not sure if that’s correct.  END_OF_DOCUMENT_TOKEN_TO_BE_REPLACED

The video is the last part of the “Lost In Europe” series recorded in Europe in September of 2016, and released during the Lost In Europe tour a couple of months later. The initial three of the four part series are a video recap of LP’s shows in Milan, Paris and Athens, and the last one features quite a special narration by LP. END_OF_DOCUMENT_TOKEN_TO_BE_REPLACED