Let us take you to the very first concert of the Smoke Em If You Got Em tour. The show took place in Stockholm, Sweden, in the Debaser club on March 26th, 2017. We have, for you, our impressions from the concert as well as transcript of what LP was saying to the audience during the gig. Hope you enjoy it. 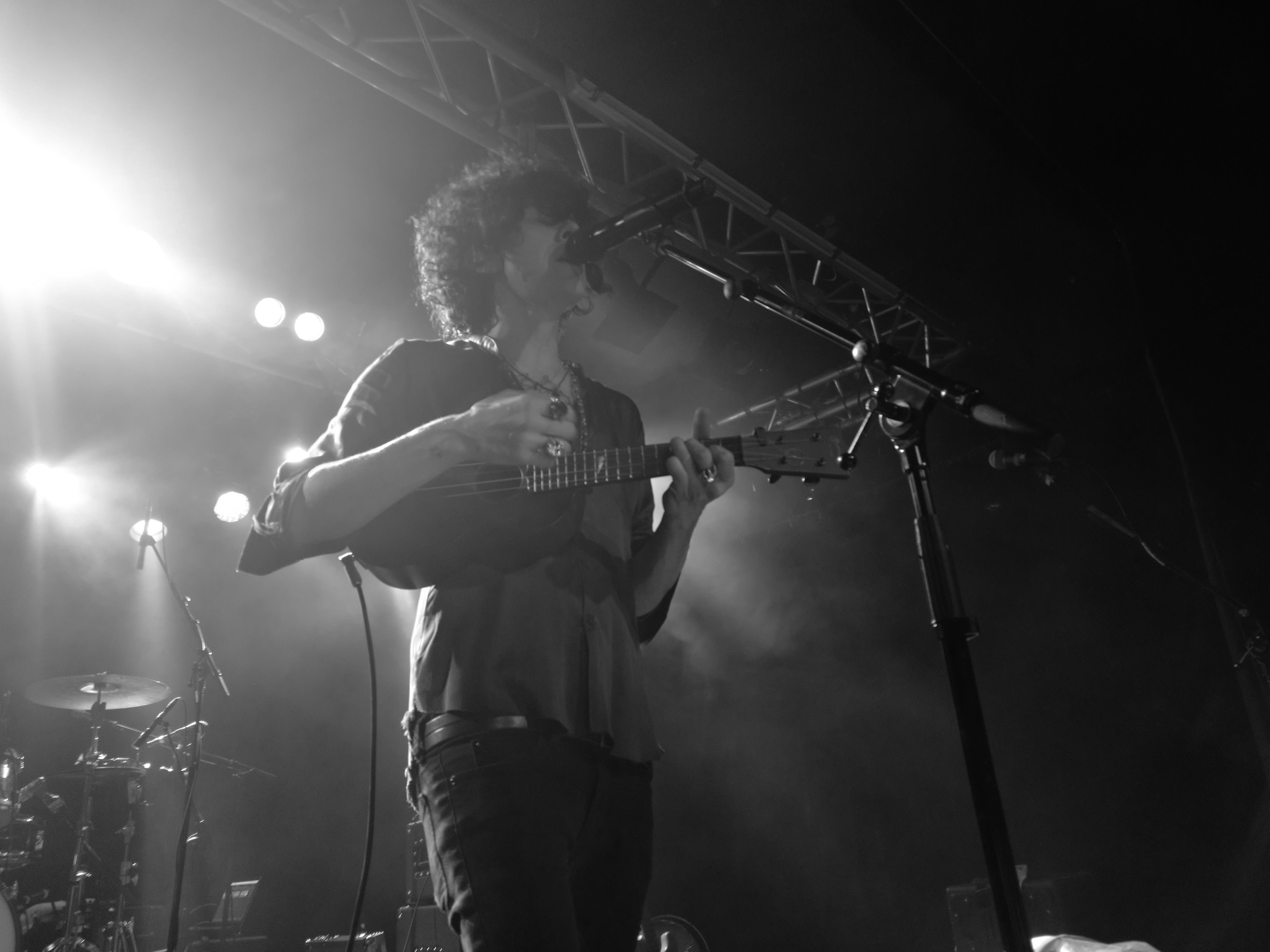 The front row is the worst. You can hear nothing, you can see nothing, everything is too close and too intense, you notice mostly the tiny details and miss the full picture, and what you get left with in the end are not clear memories, just ethereal impressions. But at times, you just can’t resist the desire to be there, and LP’s tour-opening concert in Stockholm was one of those moments. And, oddly, it was the best decision ever.

Laid back Sweden was a perfect choice for the first date of the tour. And the casual Debaser club, located literally under the bridge next to lake Malaren bay (yes, a lake in the city center, that is how Stockholm is!) gave a wonderful opportunity to all of us who hoped to see LP in a cosy and intimate set-up. And that, with an ever growing demand for her, becomes more and more of a challenge. So seeing her on that tiny (and full of traps) stage, in a crowd of no more than a few hundred, opening her European tour, was a privilege and an ultimate pleasure.

It’s hard to imagine a better start into an LP live experience than “Muddy Waters.” So cool it was left where it used to be, opening the set and bringing in vibes of some mystery which was about to unfold. LP showed us yet another rendition of this song, very focused and dark, playing with the “muddy” climate of the song more than bringing out its full power. What a delight to see how this gigantic song was taken and gentled just a tiny bit, and just for this one night!

“Strange” showed everybody who didn’t yet know what kind of vocal talent and what kind of phenomenon in general we are talking about. In the very first seconds you could literally hear the crowd going all silent and then trying to collect their collectively dropped jaws… And by the time LP arrived at the end of this second song, after people had experienced her operatic voice at the beginning and the sensual, gritty, soul notes in the chorus, Debaser was all hers, full of new followers. And some of them came there innocently, just to see who was singing that night…

Stockholm was lucky to see LP premiering her absolutely stunning song, “You Want It All.” Quite impressive to include a song that complex and challenging on the first night of the tour. When she started singing, we heard her putting yet another filter on her voice, one that she doesn’t use for any other song. So longing, sharp and profound that it brings tears to your eyes and leaves you speechless. And something special which happened was that LP didn’t like some part played on drums, and so she stopped the music and started from the top, taking us and herself through the first verse of that extremely difficult song again. That was absolutely brave and beautiful.

The most surprising performance for us was definitely “Lost On You.” The way LP sang it – focused, attentive, tender – was closer to what she does in acoustic set-ups. Her usually intense interaction with the crowd was reduced to a sing-a-long in the last few closing lines. And it was wonderful to see this song interpreted in this way.

LP brought some songs with her from her previous album to this tour. “Levitator” was simply mind-blowing, as she sang it using exactly the same tone and color to her voice as she recorded on the album. Closing your eyes, you could easily mistake it with her 2012 US promo. The same goes for the splendid “Tokyo Sunrise” and “Someday” performed in a beautifully nonchalant manner.

The smoothest and sexiest song of the evening was definitely “Other People.” LP seemed to be perfectly comfortable singing and playing this one. She shaped it into its most elegant and sophisticated version, making it impossible to take your eyes off of her.

A couple of things made the concert in Sweden truly unforgettable. One of them was some of the tension which was easy to spot, especially during the first part of the show, which is only natural on the opening night. But what came as a result is quite unrepeatable, because LP used that tension and put it into her interpretation of some of the songs that night. Resulting in alternate versions of the songs, making them unique.

One thing that we missed a lot during that show was that she didn’t talk too much to us from the stage. She quoted someone telling her that she shouldn’t be surprised when people don’t laugh at her jokes, cause they simply don’t understand what she’s saying. Well, some do, some don’t… Why tailor yourself to those who don’t?

LP disappeared from the stage before the last sounds of “Into The Wild” were over. And us, well… We were touched and impressed by so many different factors of that show. And so we wandered to the bar only to almost faint at seeing the prices of wine (Jesus, Sweden, you’re more expensive than Switzerland!), ordered it anyway, and watched hundreds of people leaving the club with pure ecstasy in their eyes. We followed them soon enough into the warm (!) Swedish night, dreaming about another night like this.

Yes! It’s called “You Want It All”. (starts singing, then suddenly interrupts the song) Ok. One more time. Sorry about that (laughs).

[You Want It All]
[Other People]

Somebody is releasing a very interesting type of record (laughs). First I had an EP, then I did another record, and now we’re kinda releasing it ‘deluxe’. There’s more songs, and I really… In this country, I hope, coming out this May. There’s four new songs. And this song is on it and it’s called “Switchblade.”

Thank you so much. Hi! Nice. Beautiful. How are you guys doing? Looks good, I’ll take a picture in a little bit.

Thank you so much. So anyway, we are very excited, this is our first night of the tour, of the European tour. You guys are amazing! Thank you. Thank you very much, we’re very excited and it’s so… It’s so nice to come back here and we hope to come back here many more times. Stockholm is one of my favorite cities in the world, you know, one of most beautiful places I’ve ever been, it makes me feel cool. (Somebody shouts from the audience) What’s that? Aww, thank you. Thank you so much.

(LP PLeasures: A couple of sentences are not audible here, but we remember LP talked here about a flag which somebody gave her during “No Witness” and which she has put into her jeans back pocket during the song) It’s not Swedish? What is it?! (somebody from the audience: Finland!) Finland!!! Sorry! I’m fucking stupid American! Apologies. I mean, you know. I’m so, so fucking sorry for that, Finland. It’ll never happen again. I even like Finland on my ass better! [LP Pleasures note: we really, really tried to understand why the hell somebody from Finland wanted to give LP a Finnish flag during a concert in Sweden, expecting she’d recognize the country it belongs to and as a result putting her in an uncomfortable situation like this, but we failed.]

Yeah! That was fun! Stockholm! I love it here. Thank you so much, thank you, thank you, thank you! I’ve been for weeks without those guys to do some stuff in Paris and in Italy, poor me. It was very fun. And I’m still so excited to be starting here, it’s, like, so auspicious and beautiful. And thanks BMG for coming here and… And thank you also for this cool as fuck club. What is it called? The Pixies record, what is it… Debaser! Who did that. What insane Pixies fan just went (not audible) There’s even, like, the WiFi code is, like, Surfer Rosa or something, don’t tell anybody, fuck. As you can see, I’m fuckin’ stupid. [From the audience: We love you!] Oh, I love you too! You guys speak very, very… You speak better than I do, probably, but, it’s like, Italian fan told me today: “Don’t get upset when they don’t laugh at your jokes, because they don’t know what the fuck you’re saying!” And I was like: “Ah. Thank you.” All right.

It just goes against my people pleasing nature, to stay back too long (laughs). Sorry!

JD Carrera on the guitar, Brian Stanley on bass and Eli Logothetis! And right now we’re gonna do the picture! Everybody say Stockholm! Thank you so much for coming, you know, thank you for everything, I really appreciate it.

So, what makes a true rockstar? At that particular moment, all we knew was that we had just been looking at one hell of a one. END_OF_DOCUMENT_TOKEN_TO_BE_REPLACED

We love this recording for the beautiful balance of vocals-guitar-drums, which is difficult to achieve on stage (especially when you have a drummer as fierce as Aaron), and which was definitely left off of the record. The ukulele is perfectly audible and the percussion creates a pleasant background for LP’s voice. END_OF_DOCUMENT_TOKEN_TO_BE_REPLACED

Take your earphones, close your eyes and fly away. END_OF_DOCUMENT_TOKEN_TO_BE_REPLACED