In a few days, LP’s American tour kicks off, but let’s take a step back to her US promo, which she did at the beginning of the 2017. In January, she toured some radio stations on the East Coast. In the second part of February, she did a little promo around the north of the US, and on Feb 17th, she visited Kink Radio in Portland to perform a few of her songs and answer some questions in Skype Live Studio. 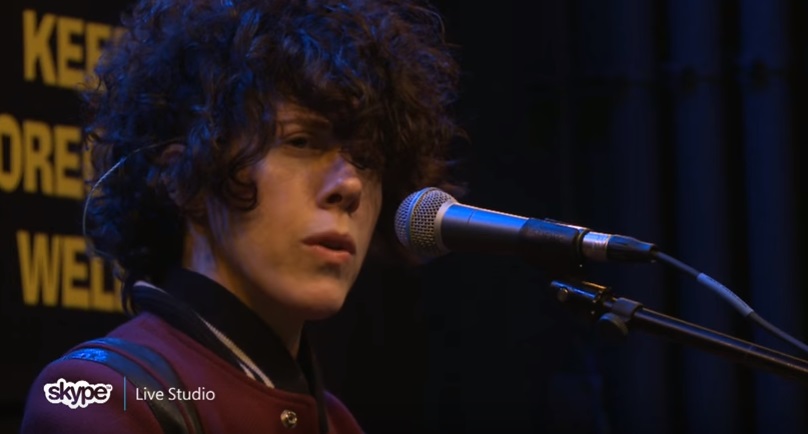 Still frame from the perfomance video

Watching LP there is a real treat, ‘cause we get to see a real chameleon – she enters the stage totally laid-back, joking with the crowd, then she becomes focused and serious during the interview, to come back to a relaxed and cheerful mood for the rest of the show. It’s easy to spot her “I feel at home here” aura, as she’s talking a lot in between songs without the risk of not being understood. Lately, in Europe, she seems to be talking less than she would want to. We miss her American flow and talent to connect with people through her stories and jokes. In Portland, she interacts with the crowd, laughing a lot, and she’s not holding back from voicing some wicked jokes – including some on Europe (respect) and on her career choices. There is something about the way she is there that makes you want to put that video on repeat.

LP performed four songs for KINK, playing most of them on the ukulele, JD accompanying her on guitar. The instruments were beautifully audible and the sound in the studio was exceptional. The last song, “Lost On You,” she played on the guitar, and we were in awe of how she played it. For us, it’s probably one of the best guitar bits we’ve heard from her. Take your headphones for this one, and fly away (link below).

Watching this performance and the interview again today just makes you want put your European life behind and join her on that tour which is just about to take place. Just sell the car, sell this mortgaged apartment, and go. And if what she did at her album release party in NY on May 3rd is a preview of what is to happen on tour, well… we’ll be trying really hard not to say goodbye to our beautiful Wrocław…

✶ Performance – LP for KINK: Into The Wild | Death Valley | Other People | Lost On You

Cort Johnson: Welcome into our studio!

LP: Thank you very much!

CJ: And welcome back to Portland!

CJ: You guys see what I’m seeing right now? You see that gorgeous colorful aura all around her? You got it! Now, you and I go back – you don’t remember, I sure do…

LP: I do remember!

CJ: And you were, kind of… putting you around all the radio stations, you came on back and we had a great talk, right after that song came out. What kind of journey has it been since then?

LP: …and I was kind of ready to put out a full record pretty soon after, but a lot of politics happened, as they do, but I wrote a lot of cool songs. Then the record came out in 2014, actually, and by then a big personnel change had happened at the label. And so, it didn’t really get put out… pushed, you know, it got put out, but I didn’t really… I could kind of tell things were gonna go a little awry, but I was just like, well, I’m a songwriter anyway, so that’s how… I’ve been lucky enough to make a living of it the last ten years, so I just kinda put my head down. I was like, “If I write some really good stu…” Stuuuufff! I was… I almost went there, man! Oh, what would happen? What the hell would happen if I’d said that? Anyway, so, I just said I’m gonna write as good a stuff as I can and just almost make it like… it didn’t matter, and… I’m sorry?

CJ: No, I was just going to ask you, you brought up politics, you think that’s because of some of the names on a level that you’re writing at?

LP: No, no, it’s just things that happen, you know. Labels, their businesses, you know what I mean, people change, there’s so many people dealing with you, and there’s so many artists at such and such label, you know, when your people go away, it’s harder to get your thing through. And truth be told, I think the record got a little out of my control, production-wise, and so it wasn’t… You know, it’s just a bunch of things. And again, it brought out some really great material, and I wrote some really great stuff that I have on some records now, and I played that stuff for the said label before I left, and they were like, “That’s great! You’re dropped.”

LP: So… But they did me a huge favour, in a way, and then I was very lucky to get picked up by Vagrant Records. And then a little label in Greece put out “Lost On You,” and then a bunch of great stuff happened.

CJ: I mean, how does that even happen? Because we love you, as soon as it came out we were all over it, then we found out you’re number one in Germany, France and Poland and we’re like, “All right, let’s bring that up a little bit in the States,” right?

CJ: How does it happen?!

LP: I don’t know, you just never know, man, that’s why I think what I’ve learned from it is just you keep writing new songs and just doing your thing. I think as songwriters we always have, like, you’re one song away from anything and that’s what… That’s what the cool thing is and that’s what the hard thing is and the scary thing is, you know… When you get that song or a group of songs that you really believe in, it’s worth everything, so.

CJ: Well, when she talks about songwriting, look her up, all right? I’m not gonna sit here… Everybody wants to talk about who she’s written for, but I’m not going to bring that up. I will bring up the fact that a lot of times songwriters will talk about “melody first,” “it’s all about melody,” “it’s all about hook,” “all about catch,” and then that’s how you end up with, like, throw away lyrics like “rock’n’roll all night and party every day.” But with you, it sometimes seems, well, like you and Cohen and Waits and Dylan, it always seems like the music has to catch up with the thoughts and the lyrics behind it. Have you ever felt, like, in the middle of that, with your music?

LP: I don’t know, I’m not sure, I feel like I’m very lyric-driven, but I’m very melody-driven, I feel like, emotionally, melody is everything for me, but lyrically I feel like I can’t… I can’t rest unless it’s a really good lyric, like, I have melodies that I think are insanely strong laying around, because the lyric is not proper, and that’s always a bummer. ‘Cause people are like, “Write something to that melody, it’s so catchy!” and I’m: “Yeah, nothing fits!”

CJ: Was music in your house growing up?

LP: Yeah, but not like you’d think, I guess. You know what I mean, everybody’s, like, kind of, like my mom had studied opera and would play opera and stuff like that, but it wasn’t like, you know… People didn’t have tap music on every day. I remember someone, like my lovers and stuff like that, I would notice that every time they got up they put music on, and I was like, “Huh, I didn’t grow up that way!”

CJ: Yeah, neither did I and it was always like a friend’s older brother that would turn you to something that became a part of your life…

LP: Totally, yeah. My first, one of my first writing partners got me really into classic rock and Joni Mitchell and all that stuff, and it was like a rebirth for me.

CJ: Well, we’ve got to do that again sooner than five years from now, all right? And you’re not gonna get so big that you don’t stop in Portland and come by Kink to say hi to us?

CJ: And I appreciate it and I also want to thank you for going musical and not medical!

CJ: I think, yeah, I found out about that, that might have been a pathway, but I think you’re doing much better with the music…

LP: Yeah, I was gonna be a gynecologist, but it’s kinda the same thing now anyway. Just kidding!

“Wasted Love” is one of our favorite songs by LP, and quite likely our favorite from outside the Lost On You album. And maybe even the most frequently played song of hers in our headphones. We love the live version recorded for the EP “Into The Wild: Live in EastWest Studios.” (Ah, we could go on and on about the way she sings “it wasn’t mine”…) END_OF_DOCUMENT_TOKEN_TO_BE_REPLACED

LP premiered “Girls Go Wild” during her show in Sacramento, on February 9th, the opening night of her American tour. Thirsty for any snippet or preview of her new music, all the more so since her album is in the making, we were wondering if she would introduce some new songs to her American audience.  END_OF_DOCUMENT_TOKEN_TO_BE_REPLACED

There are virtually no questions, “just” an eloquent conversation between LP and Mike Mettler that takes us from discussing the problems with the Forever For Now album, through talking about the power of “Muddy Waters,” to going into details of the who’s and how’s and why’s of what inspires LP musically.  END_OF_DOCUMENT_TOKEN_TO_BE_REPLACED