In 2016, if you went to YouTube to search for LP videos, one of the first result would be a blueish still frame, with musicians playing live instruments in a beautiful studio, decorated with fairy lights. This appealing image would draw your attention immediately. And most probably, you wouldn’t leave YouTube until late at night, after having watched all of the performances from that session, recorded at EastWest Studios, a dozen times. We have to admit: this session is so well done, so visually beautiful, and so amazingly well recorded (and so well sung, so well performed, so… Yes. In a sec.) No wonder a record came out of this event. And, thank God! 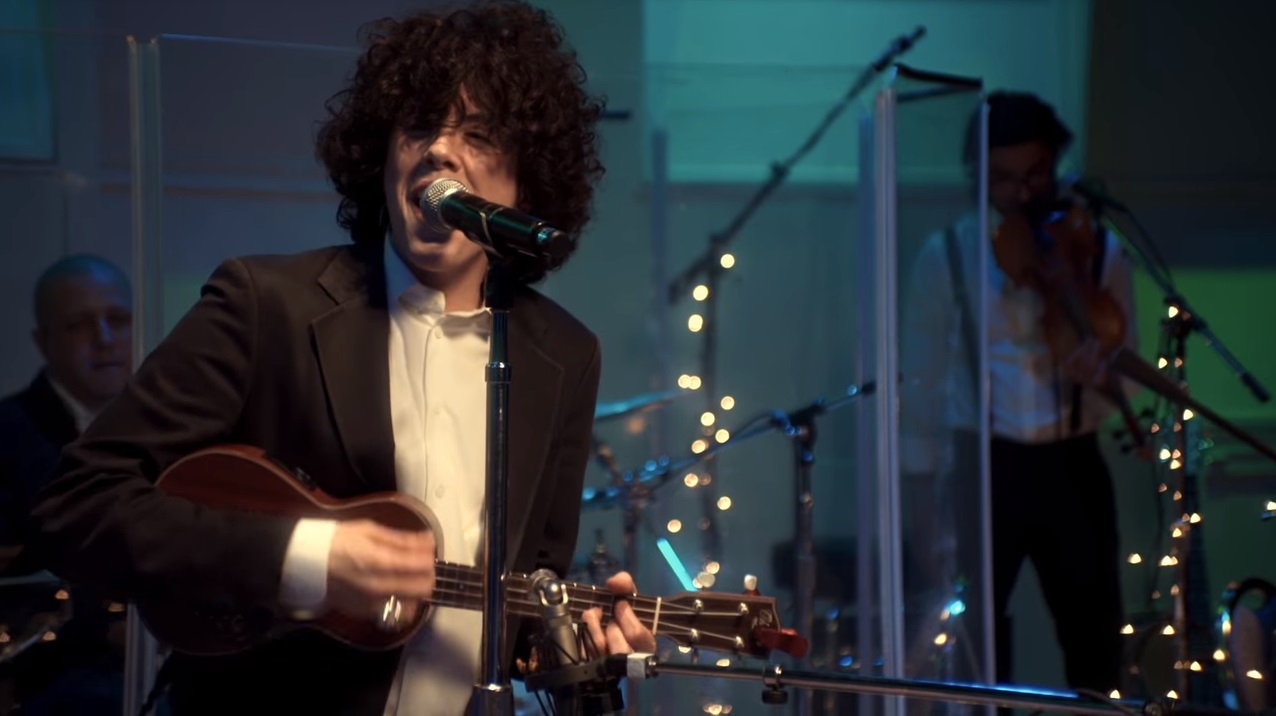 It was the fall of 2011 when LP got signed to yet another major label, this time to Warner Bros. It was a particularly intense and fortunate period in her career as a couple of months earlier her song “Into The Wild” got picked up for the Citibank commercial. Soon, and very much unexpectedly, the song went viral, and a couple of months later, LP would take this one and several other songs to EastWest Studios, to perform them for a small audience of invited guests and people from the music business. The outcome would be the live EP, Into The Wild: Live At EastWest Studios, released in April of 2012 by Warner Bros. It was LP’s first major label record, personally produced by none other than the famous Rob Cavallo, the label’s chairman.

It was Rob Cavallo’s idea, to release this live EP prior the recording of LP’s full-length album. When LP got signed to Warner Bros, she didn’t have any demos and she had to get them recorded before working on her full-length album. Rob Cavallo decided to do it in a very unusual and extravagant way: he picked one of the most famous recording studios in the world, where LP and her band rehearsed for a few days. When the songs were ready, the crew turned the studio into an intimate venue with a “glamorous Hollywood club”-kind of vibe. They invited some guests down, and so the songs were recorded live, while also being filmed.

Reportedly, apart from recording demos and releasing the EP, Rob Cavallo wanted to capture “lightning in a bottle.” Meaning, on one hand, he was truly in awe of LP’s voice and had become an instant fan since she was introduced to him in 2011 by the A&R Manager, Jeff Fenster. On the other hand, the hype around “Into The Wild” was a good reason to take it even further. And so, after considering a few other locations, Rob Cavallo and the engineer Dough McKean chose the famous EastWest Studio One for the recording of LP’s songs. The main reasons for choosing it were its perfect size, incredible equipment, and amazing lights. The sound produced on that night was outstanding. To get a grip of how splendid the location was, let us just say that some of the most appreciated artists in the world recorded their albums at exactly the same studio: Michael Jackson (Thriller, Dangerous), Frank Sinatra (Strangers in the Night), The Rolling Stones (Bridges to Babylon), Foo Fighters (Concrete and Gold) – simply, a dream place.

For many, the videos from EastWest Studios are one of the favorites of LP’s performances ever. No wonder… There are so many reasons for loving them, and the energy of these performances enthuses us every single time. The show was truly intimate, played with a full band, with live instruments, in front of a small live audience, with LP in amazing vocal form, looking smart and handsome. She used a comfortable wireless mic, which allowed her to move freely around the stage in songs such as “Someday” or “Halo,” for which she didn’t use her ukulele. Vocally, LP was flawless. Sure, the EP got its production too, but it’s so much more real and raw in comparison to the full-length record released later in 2014, Forever For Now. The DNA of LP’s vocal – the unparalleled color and tone, the sharpness, the edges that remained thankfully untouched, and all these things together are exactly what gives us goosebumps every single time we listen to her voice. On top of that, she gave each song this vibrant, positive energy, even to those that speak of longing or heartbreak. It must have been quite an event for LP, but as she delivered song after song, she seemed fully focused yet confident and relaxed. Performance-wise she nailed it too. Everything was in place: the connection with the audience, the electrifying cooperation with her band, her signature swag, her elegance. What else could one possibly need to fall in love? 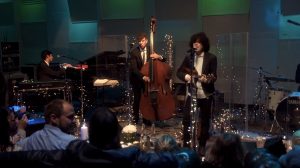 Five of the songs recorded during the event were later released on the EP: “Into The Wild,” “Wasted Love,” “Someday,” (which were the first three songs written by LP after she came back to writing for herself), and also “Levitator,” and “Tokyo Sunrise” (pointed as a highlight of the EP by the reviewers). The “Into The Wild” video was released to promote the EP a couple of weeks prior its premiere. For us, from all EastWest studio recordings, probably the most delicious one is “Levitator.”  There is such harmony between the audio and visual part of it, one just can’t get enough of it!

Seems like the experience was both exciting and a bit challenging for LP. This is how she described it a 2012 interview for Vodafone:

The EP is a live EP, it is a DVD and an EP. We recorded it somewhat as a pre-production for a record that I’m in the process of writing and recording. We just thought we’d get our bearings as far as where we’re at, and a big part of what I do is live performance. So, we wanted to get that sound going. And then the chairman of the label, Rob Cavallo, he suggested that we film it as well, and invite people down, and we did. And it came out really well, so we decided to put it out. It’s really nice. It’s nice to have a live thing out there. I was a little… It’s hard. It’s scary to put live material out there, ‘cause I’m always thinking like, ‘Oh, I can’t believe I sang that.’ But I had to let it go, it’s okay.

Well, it’s so much more than “okay,” no doubt. And so, let us leave you here with this beautiful outcome of LP’s session at EastWest Studios. We assembled for you the playlist of all available recordings, so take your favorite drink and chill to those amazing performances. Yes, we know you know them well already. So what?

✶ Into The Wild: Live At EastWest Studios – LP’s EP produced by Rob Cavallo and co-produced by Mike Elizondo and Julian Raymond. It was released via Warned Bros. on April 24th, 2012.

✶ LP was accompanied by fine musicians. The amazingly talented Nick Rosen was the music director for the session while also being responsible for some additional arrangements. He also played the upright bass. Joey Dosik played the piano and keyboards, Amir Yaghmai – the violin and the guitar, Josh Lopez – the guitar, and Oliver Charles – the drums.

✶ On the engineering side, Dough McKean was responsible for the recording of the performance. While doing that, he was sitting in the control room, on the other side of the glass. There were six camera operators filming the show. After the session, Dough McKean, the video crew, and staff engineer Adam Hawkings sat down together to work on the final version of the videos.

✶ As a physical copy of the EP, Warner Bros. released a duo pack, comprised of a DVD and a CD with the songs’ audio versions plus one additional audio track, a preview of LP’s record: the studio version of “Into The Wild. There was also a vinyl version of the EP, with all the tracks from the CD, plus one bonus cover: a studio version of Roy Orbison’s song, “It’s Over.”

✶ EastWest Studios (prev. United Western Recorders) – a recording studio in Hollywood recognized as the most successful and most awarded studio in the world. Some of the biggest artists of the 60s, 70s, 80s and 90s recorded their songs in this studio. It won countless excellence awards, including ones for the engineering and sound quality. The studio got founded in the 60s by Bill Putnam, a songwriter and an audio engineer called a father of modern recording.

✶ Rob Cavallo – an American record producer, musician and chairman of Warner Bros. Records, Grammy award winner. He worked with Eric Clapton, the Dave Matthews Band, Black Sabbath and others. In 2011, LP was introduced to him after Jeff Fenster, the vice president of Warner Bros., saw her performance in the Soho House club where she sang “Someday.” Rob Cavallo was in awe of LP and became an instant, huge fan. He signed her to Warner Bros. and decided to produce LP’s record, Forever For Now (2014).

✶ Jeff Fenster – vice-president of Warner Bros at the time, was responsible for searching for new talents and promoting them. He participated in the discovery of Britney Spears, the Backstreet Boys, Whitney Houston, and Aretha Franklin. He offered LP a contract after he saw her in the Soho Club in 2011 when she performed “Someday.”

✶ Nick Rosen – an American composer and multi-instrumentalist from Los Angeles. Musical Director of the Sayers Club. He has worked with artists like Bruno Mars, Feist and Macy Gray. In the Sayers Club, he has featured performances of Prince and will.i.am among others. He’d been LP’s musical director during her Warnes Bros. times. His latest release is 2015, beautiful, jazz album “Step Into The Light”, with our favorite, “Nafeethia.”

✶ Equipment used for the recording of the session: the control room was equipped with 80-channel Neve 8078 running Pro Tools 10. As for the mic, LP decided to go with a Shure PGX2/PG5, “a pretty flat microphone as she’s a powerhouse singer, so it sounded pretty good.”

We have in mind a very particular performance, and it takes us back to a life-changing experience which the Smoke Em If You Got Em tour embodied for us. And even though we were quite dizzy from the number of wonders which were happening for us every day, the premiere of LP’s masterpiece, “Suspicion,” was one of the highlights of this unbelievable journey. END_OF_DOCUMENT_TOKEN_TO_BE_REPLACED

Never before has it been more tempting to go on about our perception of LP’s lyrics. “One Night In The Sun” just boils and freezes one’s conscience in singular still frames of the hazards of an ending love. And LP, as an experienced heart surgeon, is very precise and clever with her cuts. The words are so dazzlingly brilliant. Maybe the best we’ve ever read from LP. Tangible, sensual, sunburnt. END_OF_DOCUMENT_TOKEN_TO_BE_REPLACED

When you play yourself LP’s 2014 album for the very first time, and when you hear its bursting opening track, “Heavenly Light,” it prepares you for everything but for how the album ends: with a quiet, gentle ukulele, tender whistling, and vocals with something inconsolable to them. END_OF_DOCUMENT_TOKEN_TO_BE_REPLACED