For something nice and easy today, we have yet another Italian Radio Rai event for you – a performance and interview which LP gave to radio’s King Kong program back in 2016. The conversation is a lovely bit of chaos, with the host, Silvia Boschero, trying to do three things at the same time: keep LP interested, translate her answers into Italian and ask further questions in both English and Italian, based upon LP’s English answers and the Italian translations… And, oddly, it kind of worked. The outcome is very entertaining – you get snippets of sentences in two different languages, bombarding your ears like a sweet machine gun volley. The art of applied juggling, senior level. 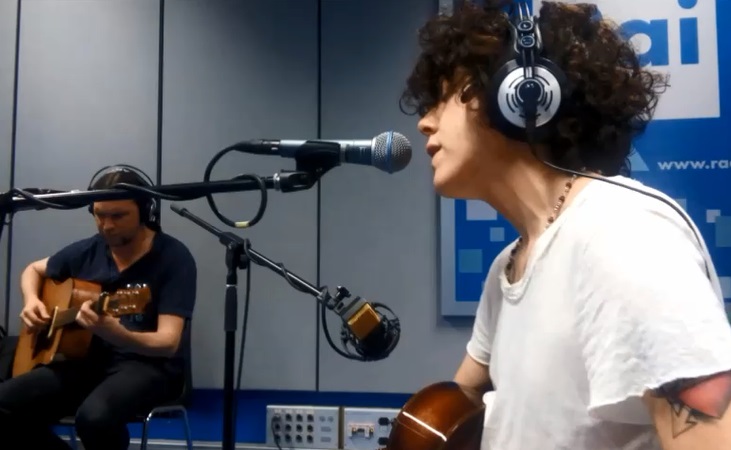 And so, we’re taking you back to the summer of 2016 and LP’s European radio promo tour once again. We must be missing the sun or something. Or perhaps it’s Italy we miss. Well, anyway, on July 26th LP visited Rai Radio, only a month after her previous performance there, the occasion when she sang the exceptional version of “Strange.”  This time she dropped by for another Radios’ program, King Kong, and performed the acoustic versions of some of her songs off of the Death Valley EP (but leaving out “Lost On You”!) In between singing, she also answered some questions and shared her observation on the current political events in the US. And what else did they discuss? LP’s roots, music-wise and ancestry-wise. And a little bit of her songwriting. We have the interview transcribed for you below.

And there were also the songs, which are completely another story. Because the way Trevor handled “Muddy Waters”… We first heard it played by LP and him for the Jam In The Van series in 2015, and we have to say: his interpretation of the song is so beautiful. We love it so much and his version is definitely our favorite. He grasped this hopeless despair, the precious seed of the song, so flawlessly. Trevor’s guitar melody line is strong, yet it brings with it the elements of surrender and of giving-up, while LP’s voice contradicts with moaning and crying in tribulation… This mix is so stirring that even after the hundreds of times we’ve listened to them playing “Muddy Waters” together, it invariably makes us choke. What an arrangement. They also played a smooth rendition of “Strange” and “Death Valley” in King Kong studio. Guess we’ll never get tired of LP’s acoustic performances. So here it is, enjoy!

✶ LP for King Kong – an audio interview and performance

(The quality of the sound in the videos is very low, so they are here for your viewing pleasure. If you want to listen to the songs properly, use the audio file above, with both the interview and the songs.)

King Kong: LP! Hello, how are you?

LP: I am very good, thank you.

KK: I’m so happy to have you here. Now I’m going to introduce you to our listeners with a brief story about you. Of course I have to say that you are a little bit Italian.

KK: (In Italian: Your mother – Napoli. Your father – Sicilian and Irish.) That’s a good mix – Ireland and Italy.

LP: It is a little explosive. Absolutely explosive. I have a bad temper when I drink. No, just kidding.

KK: I know you are! You have a wonderful voice. And not just a voice, because you also wrote songs for mainstream American stars. You started quite a long time ago. When did you start professionally singing and playing?

KK: With your first album?

LP: That was my first solo album. I had some bands before that.

KK: What did you play at the beginning?

LP: It was rock-pop kind of thing. But I’ve always had a couple of sides to me. That’s why, I think, I became a songwriter, because I have a diverse range of writing. I like all kinds of stuff. I’ve written… I’ve got a wide array of cuts. I have stuff that’s, like, a dance song, that went gold, a song with Joe Walsh from The Eagles, I have song with Rihanna, I have song with the Backstreet Boys. It’s like very all over…

LP: Yes, that was my first big cut.

KK: And here’s also Trevor. Trevor, hi! Nice to meet you. So, it will be a big pleasure for us to listen to a song. What are you going to play?

KK: “Muddy Waters!” Let’s listen to it, thank you very much.

KK: “Muddy Waters”! You also studied music and you studied singing. I know that you studied opera singing. What did this study give to you, in pop music?

LP: I studied singing and voice at Carnegie Hall in Manhattan. I just did a lot of scales. It’s like, when the guitar player does scales all the time, I just did that with my voice. I always do that to warm up my voice before the show and after show. Then I’d be touring around with my band, and in order to get ready for a show, I’d do the scales for half an hour, and then do them afterwards. It gave me a lot of range, with my voice.

KK: About the lyrics – what do you write about in your lyrics?

KK: It’s so deep inside you, the lyrics, I mean, very personal.

LP: Yeah, I mean I feel like that’s what the difference is between me writing for me, and me writing for other people. I feel like when I write for me, I’m able to go very deep. It’s special to me and I try to find the deep, specific situation that I’m going through and then tweak it to make it universal. Cause it’s not unique, everybody goes through this. It’s how we relate, so we can go through things together, even though we have different experiences and we can write about that and share that.

KK: Of course. So, now what are you going to play for us?

LP: We’ll play the song called “Death Valley,” which is also the name of the EP.

KK: There are Hillary Clinton and Donald Trump running for president…

LP: It’s a funny thing. What did these two woman that hosted the Oscars said, “Bitch is the new black” or something like that. Cause having the woman after the black president… It’s thrilling to have… who knew, like… in a lifetime, that that would happen. I mean, the black president and a woman president. Other countries are way ahead of us, they’ve got women running things for a long time. Those are the dangers too. All the sexism that happens, I mean when a capable woman… You know, like,  Hillary Clinton, obviously way more capable and experienced than George Bush, but there will be people like, “I can’t believe!”

KK: So, the last song for us! What are you going to play?

LP: We’re gonna play a song called “Strange,” that just started to come out in the US. We’re gonna, we’re dedicating it to the people of Orlando, after the tragedy that happened.

KK: We are all strange! Beautiful! Thank you so much and good luck with everything.

LP: Thank you so much.

KK: Thank you for your voice and your purity and see you again!

LP: Yeah, I hope so, thank you very much.

✶ Shooting in Orlando – a shooting being an act of hate, which took place in a gay club in Orlando. 49 people were killed.

The video itself is a treat and we especially like the moment when LP walks the streets of London. She talks about her career and also explains what, in her opinion, is important when you’re a young artist. END_OF_DOCUMENT_TOKEN_TO_BE_REPLACED

And it wouldn’t hurt to loosen up every now and then. Cher is Cher, and she’s fabulous. Whenever the conversation leads up to her, that’s the ultimate conclusion. Come on, not every single thing you put on has to carry this straightforward arty vibe, right? END_OF_DOCUMENT_TOKEN_TO_BE_REPLACED

Truth be told, we’d like to show you this interview because of one specific answer she gave. At one point, she talked about the way she approaches developing a topline for a track. We were astonished to read about it and at the same time we couldn’t believe that the interviewer didn’t continue the topic of the way she creates music.  END_OF_DOCUMENT_TOKEN_TO_BE_REPLACED