Let us take you back to mid-September, 2016, when LP played her three big European concerts, two in Greece and one in Romania. Shortly before her Bucharest show on Sept 17th, she was interviewed by different members of the Romanian media, our favorite being the one by Kiss FM radio. Adorably awkward at some points, with LP being charming and sweet and taking care of the conversation’s flow. It’s so wonderful that when you get stuck, you can (almost) always count on her to save the situation somehow. The living example of kindness. 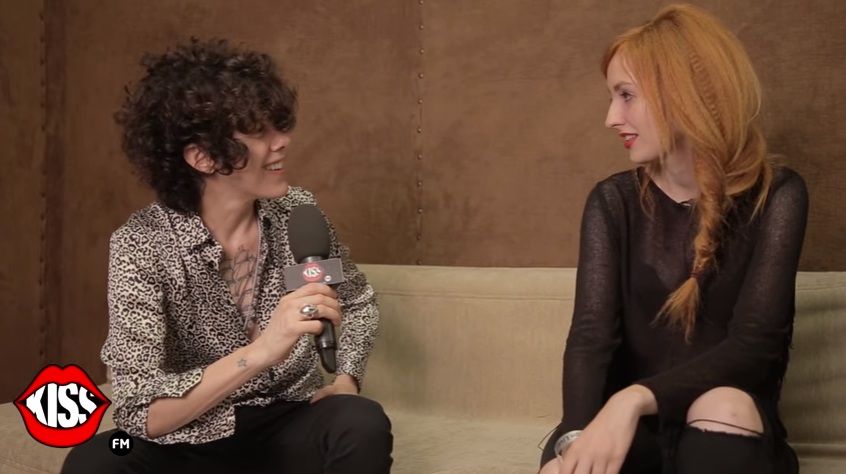 Still frame from the interview for Kiss FM Romania

Let us take you back to mid-September, 2016, when LP played her three big European concerts, two in Greece and one in Romania. Shortly before her Bucharest show on Sept 17th, she was interviewed by different members of the Romanian media, our favorite being the one by Kiss FM radio.  Adorably awkward at some points, with LP being charming and sweet and taking care of the conversation’s flow. It’s so wonderful that when you get stuck, you can (almost) always count on her to save the situation somehow. The living example of kindness.

The interview is more of a Q&A session than a conversation, but nevertheless it’s pleasant to watch as she talks alcohol, movies and favorite songs, but not only this – also songwriting, androgyny and fateful expectations. And guilty pleasures.

We have a full transcript for you, together with some additional info. Enjoy!

Q: “Lost On You” brought you here in our country. Tell me what’s the story of this hit.

LP: Well, it was at a very difficult time in my life. My personal life and my professional life were at a place where you don’t know that it’s actually going bad, but you feel something. That spot that you get in. In a personal sense I wasn’t really ready to let go, but I knew that it was going to some places I couldn’t return from. So I had this phrase I wrote, the title “Lost On You,” when I was on tour. It started me thinking about all the things I lost on this person and also what was lost on them and I was not getting what I needed, and I think vice-versa, you know, there’s two sides to every story. But we were in that place. The break-up place. But we still… we had a long way to go. So, yeah, I remember when I wrote it, it just kind of flew out in one day. It was very like… the drama that was in there, just came flying out. I tend to write chords and stuff like that, but then, once we get the chords down, I like to go for melodies first and I just sing it to the mic listening to the music. And how I’m feeling that day and sound of the music just gives me… kind of tells my heart where to go. And I didn’t know… I really love the song, but it took a while, it’s almost two years before it… since it came out.

Q: You’re also a composer and you worked with huge names like Rihanna and Cher. Tell me, when you are working on a song, are you thinking about the artist who will sing it?

LP: Sometimes yeah, a lot of times. When I was writing for Cher… I actually wrote one of the songs that Cher did for Leona Lewis and then she didn’t use it and then I had another song, I had two songs on that record and the other one I definitely wrote for her. The Rihanna song was written for her. I wasn’t with them when I wrote it, but yeah, I do try to go into that person’s head. When I wrote the song for Leona Lewis, it’s kind of funny, because I feel like I wrote this song from this perspective of how she felt about her break-up and then I wound up writing a song with her, that she cut later, called “Fingerprint” and I was talking to her about that song and I said: “So you’re really torn up about the break up.” She’s like, “No, actually it was great, I’m glad it is over.” See? You never know. Sometimes you don’t know how someone feels, it’s funny.

Q: Tell me your three favorite songs of all time.

LP: Oh gosh. I think “Bohemian Rhapsody” by Queen. I think “Going To California” by Led Zeppelin. And I think, what was that song, oh God, which Jeff Buckley song am I thinking of… I just forgot. Anyway. Moving on. I think The Rolling Stones, I have to say, it’s gotta be “Sympathy for the Devil” or something like that.

LP: Oh, both. I think it’s more myself, you know. I am… I think I… I worry about… You know, you have to worry about what other people think sometimes, when they’re… when you’re expected to. But I really worry about… if the songs matter to me. I think I have to write stuff that gets it out for me and that’s why I think I have a wide range of songs that come out, because I don’t really like to write the same song twice. I find that a little boring and kind of calculated.

Q: Tell me what’s the last thing that you reproach yourself.

LP: That I reproach… myself… about, like annoyed myself about?

LP: Oh. I actually got mad at myself for my last record, I think, for having expectations. I think expectations ruin things. I think you gotta just work hard and hope for the best and not expect anything.

LP: Guilty pleasure. I think… probably… drinking. I do like to drink, it’s nice.

Q: With a friend?

Q: Have you drink something in Romania?

LP: I didn’t really drink much in Romania. I had a beer last night and a glass of wine. I think I have to… What’s the quintessential Romanian drink?

Q: Țuică. You should try it.

Q: How would you define the life of an artist?

LP: The life of an artist, I think, is up and down. Like, sometimes extreme highs and extreme lows. And I think it’s difficult, because like I said, I think you have to be very careful where you allow, like question you just had, the align between what people expect from you and what you expect from yourself. Because your art and what it is came from you, and you have to keep being true to that and not try to please people, and try to create it for them, because they didn’t exist when you first started. So I think that that’s a difficult thing as an artist and you just have to know that in the down times… that your work shit help get you through. That’s much more easily said than done.

Q: I see you have a passion on androgynous style. Tell me more about it.

LP: On what style?

LP: Oh, yeah, yeah. Sorry. Yeah, I do. I think a lot of people are both things. I just happen to feel it more. I don’t really feel like… I don’t feel like: “Oh, I’m a guy.” Like, obviously, I mean, I sit down and pee every day, I know I’m not. So it’s obvious to me. I just feel like I don’t have to subscribe to any social campaign of how I’m supposed to dress. I look exactly how I feel on the inside, so I feel like it’s my truth and it works for me and I enjoy it. I just like… style icons for me are David Bowie and Patti Smith, people like that. Androgyny to me is almost like an art form. I love the different types of it. You know, even like, who we lost that year, like David Bowie, of course everybody talks about his androgyny. But, like, Prince was very androgynous too and it’s very interesting how we lost both of them. It’s, like, Prince… like, in what universe is that guy super-masculine, but he was in a way. It’s fascinating to me.

Q: Tell me what things make you smile.

LP: I like people who can be cool, but nice. I don’t think that it’s possible to just be rainbows and puppies and everything all the time, but I think I admire kindness in people. That they can be kind and also be themselves and cool and real. And that kind of stuff. Just someone being decent makes me smile. And, you know… dogs and puppies and rainbows and stuff.

Q: Tell me how looks an ordinary day for LP.

LP: The favorite day or an ordinary day? On tour it’s a: get up, I do yoga, I’m really into yoga, and then I do… I usually like to play my instrument a little bit. I don’t know. At home it’s, like, I take my dog out for a walk, I hang out and then I, maybe, I don’t know, I just have a drink, have my guilty pleasure and then I hang out with my girlfriend and… I don’t know.

LP: Yeah! Not that guy. Not the older guy, the main guy. Al Pacino! I love Al Pacino! I’d watch Al Pacino in anything.

LP: My favorite whistle that I do?

LP: Probably… I like them all, but the [whistles, LOY short whistle], that one’s fun. That one is very versatile and I think it’s even more unexpected than my other whistle. People like [looks around], you know. When I first did “Lost On You,” people were like, they kept looking around the stage to see who is doing that, I was like: “It’s me, over here!” But yeah. I like that.

✶ “Fingerprint” – a song written by LP for Leona Lewis for her album, Glassheart (2012).

✶ Țuică – a traditional Romanian spirit prepared only from plums. Contains up to 60% alcohol.

Since LP feels quite comfortable and natural in our European home, she speaks to us all as if we were born in New York. Well, we’re not (still, it’s lovely of her to do it). But nevertheless we gave it a try, you will find the transcript below.  END_OF_DOCUMENT_TOKEN_TO_BE_REPLACED

She talked to us a lot from the stage and we tried to capture as much as possible from the different videos recorded during the show. END_OF_DOCUMENT_TOKEN_TO_BE_REPLACED

When LP opened her American tour back in February, she put one new song on the setlist, the brilliant “Girls Go Wild.” In June, she kicked off her Summer European Tour similarly, introducing another new song, “Dreamer,” at her tour opening show in Italy. END_OF_DOCUMENT_TOKEN_TO_BE_REPLACED