On October 8th, 2015, the Los Angeles art community had a unique chance to see LP’s unusual performance. The occasion was significant – it was the opening of Alexander Yulish’s exhibition, titled “Immovable Thoughts,” taking place at the Ace Gallery in Beverly Hills. She sang “Lost On You” there and it was one of the first performances of this song, ever. And what makes it even more special is that she sang it solo. On top of that, she didn’t use a mic, and her ukulele was unplugged, so for those who attended the event, it must have been a real treat. She was singing in front of the largest of Yulish’s paintings on view, “Two Faces Neither are Mine” (acrylic on canvas). 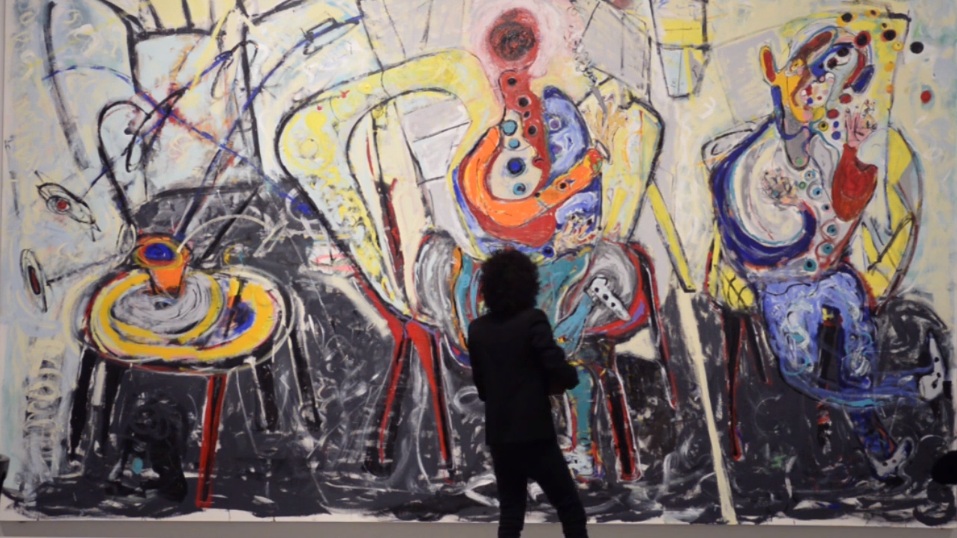 Watching LP perform at Ace Gallery, you can’t help but think she belongs there. As if it was the most natural and inseparable set up – her, with her Dylan look and elegant, Bowie-like silhouette, the painting, her music, the acoustics of the room.

Yes, the acoustics – the echo in this room is haunting, making the sound of the ukulele together with her voice absolutely remarkable. She seems to like it too, and you can kind of tell she actually could go on and on playing, singing. And so could we, easily going on and listening to her for so much longer than those few minutes. Especially as the very last part of her set is so fierce…

Alexander Yulish is an American painter (charcoal, ink and paint). Born in 1975 in New York, the son of famous artist, Barbara Pearlman. After graduating from college, he moved to Los Angeles. He describes himself as a Neo-Modernist. His paintings were exhibited in various galleries across the United States, some of his work is also within the collection of Museo Jumex, Mexico City. In his own words, “I want my paintings to literally beat the shit out of the person. The last thing I want is for people to say they’re beautiful.” Alexander Yulish works predominantly in large scale formats. Currently lives and works in Los Angeles. The “Immovable Thoughts” exhibition was inspired by people and events from Alexander Yulish’s life throughout the previous year. The title “Immovable Thoughts” came from a quote by Richard Strauss: “Even the pain I feel in your absence lies buried beneath immovable thoughts.” His works are expressive, rich in colors, with confident black outlines. They tell stories both about people’s emotions and their everyday routines.

And as for the link between Alexander Yulish and LP. Apart from being an artist, Alexander, together with Jason Scoppa, was also the creator of two glamorous nightlife spots in Hollywood. The first one, Green Doors, was a club resembling a pre-war French salon. Some Europe-longing soul was behind the décor of this place. It was famous for its stylish and privileged guests, and it housed live music, costume parties and some cabaret acts. In 2008, the Scoppa-Yulish duo moved to no other place than… the Bardot club. There they developed their original idea of live music which later evolved into the Bardot Sessions and famous cover nights (LP being a regular performer), taken later by Scoppa to The Sayers Club.

So here it is for you – “Lost On You” in the Ace Gallery. Go ahead and watch those two arts joined together in true symbiosis.

✶ “Lost On You” performance in Ace Gallery

✶ Here you can read more about Alexander Yulish’s art

The video is the last part of the “Lost In Europe” series recorded in Europe in September of 2016, and released during the Lost In Europe tour a couple of months later. The initial three of the four part series are a video recap of LP’s shows in Milan, Paris and Athens, and the last one features quite a special narration by LP. END_OF_DOCUMENT_TOKEN_TO_BE_REPLACED

You may already know this song from live performances. It’s called “Road To Ruin” and it was included as the 13th song on the Japanese version of the album. According to info on Wikipedia, LP wrote “Road To Ruin” together with Isa Summers, but we couldn’t cross-check it with any other source, so we’re not sure if that’s correct.  END_OF_DOCUMENT_TOKEN_TO_BE_REPLACED

LP played this song during the Lost In Europe tour, and earlier in Greece.

The song remains unreleased but LP mentioned that she is going to put it on her new EP or album.  END_OF_DOCUMENT_TOKEN_TO_BE_REPLACED