Next to LP’s 2016 interview for the Taratata show, also French, the conversation with madmoiZelle takes the prize for one of the most charming videos with her. She talks about her appreciative mindset, her ability to read people, her feelings towards her previous label, and her famous ship tattoo. 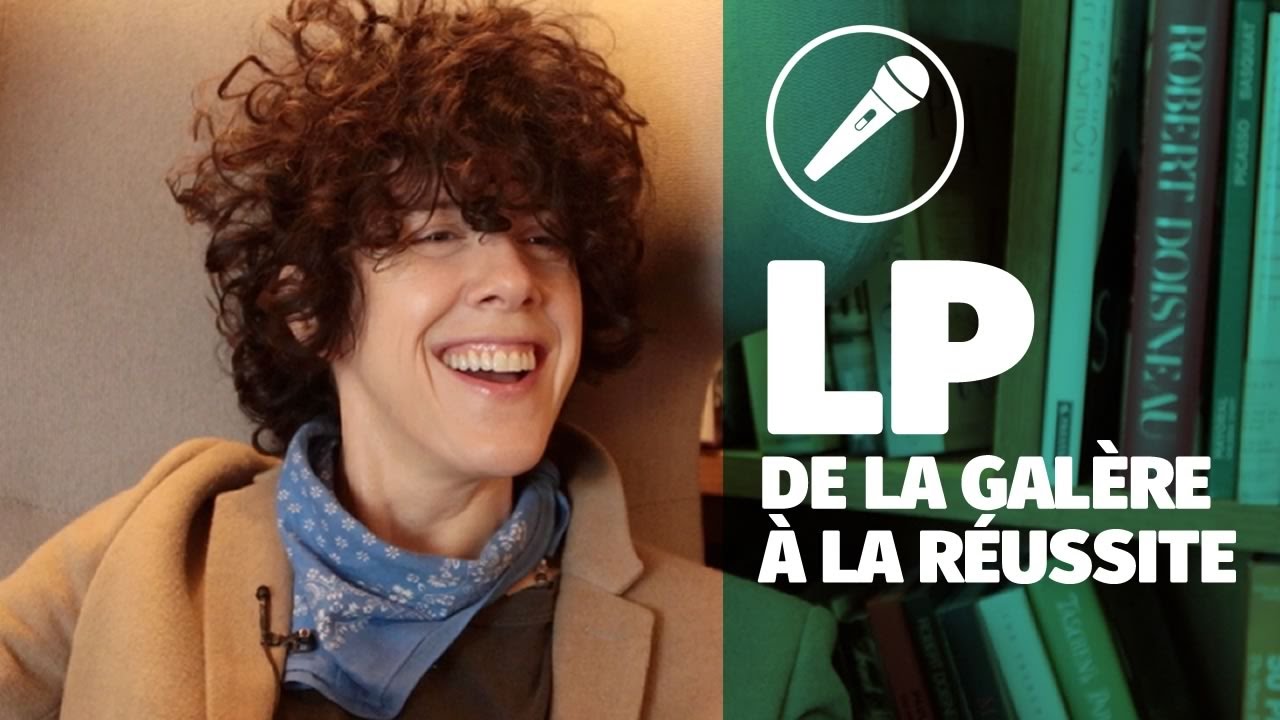 Still frame from the interview for madmoiZelle

LP seems quite relaxed and comfortable in madmoiZelle’s big and cozy armchair. It would also be fair to point out that it is one of the these interviews where the journalist is attentive and having a casual conversation with LP, instead of ticking off a Q&A session, which is nice. Enjoy!

M: And welcome on MademoiZelle!

M: Your song “Lost On You” is a very beautiful success in Europe! But you released three albums, what has changed in your music since 2001?

LP: Oh, so many things I think have changed. When I was a first signed indie artist, there was no YouTube, Twitter, Instagram or that stuff, so, it’d just got different vibe, getting signed back then and getting your stuff out. I was very indie… I didn’t get signed to a major label till about 2006. I was in the major label system for three years, and I just wrote a ton of songs, I wrote about a 130-140 songs. But no record came out, and I was dropped, and I just thought, “Hey, my artist career is kind of done.” And then one of my songs got picked up by The Backstreet Boys, and then I started writing for other people. I was happy to be getting paid to be a songwriter. That’s a bit like working my other job. When I realized I could write that many songs and I liked it, I just kept going. My managers were like, “You shouldn’t be done as an artist, you should write songs for you.” And I think I felt kinda bolstered by their confidence a little bit, and I started playing ukulele, and it just made me enjoy music again, writing for me and singing, more songs, and tadaaam, here I am on mademoiZelle!

M: Facing your process, is your success more significant for you?

LP: I think it is, yeah. I think anything you have to work for, that takes a little longer is… I do feel like I’m really absorbing it and enjoying it and being appreciative of it. I’m really happy that that’s possible, because I think sometimes it’s gone in a second, and you don’t… You get really hung up on some of the wrong things sometimes. If it happens too quick or too early, not always, but, you know… it’s possible, and, yes, it’s definitely nice.

M: How do you get your inspiration in writing songs for other people?

LP: I find people in general fascinating and exciting, and just hearing about their life or just, even, sometimes I just walk in the room and I just feel something from them. I’m very used to meeting people right away and writing a song or whatever, and I think everybody can feel that initial… I don’t know if you call it excitement always. It’s interesting when you first meet someone. You don’t know much about them and sometimes you meet someone that you’ve read a bunch about, or seen a bunch of times, so you come into the session whistling their biggest song, and you piss them off or whatever… No, I’m just kidding. It’s fun, it’s interesting, and I feel like sometimes I get to be a bit of a voyeur, not even like an actual voyeur, but what I think as a voyeur. I start thinking about that person or about hearing their stuff, or just trying to feel a mood.

M: You said that it helps you in writing your own songs, your own music?

LP: Yeah, I learn different stuff, I just pick up different stuff, I couldn’t tell you what I learn, but I can tell that I kind of absorb, it’s like a snowball kind of thing. It’s just really interesting and fun to see how other people do things. It’s constantly inspiring. And then there are times when you’re not inspired at all. I’ve learned to not worry about those times. I feel like I’m picking up stuff when I’m not putting out stuff.

M: Is that something that you will carry on with your career, with your success?

LP: Yeah, I think so, I mean I know so. I enjoy it, and it’s fun for me, and a little break from myself.

M: I read that you were exposed to opera, is that right?

M: Does it influence your music?

LP: Oh yeah, for sure. There’s a lot of drama in my music, for sure, and I think I took that from opera that I listen to, and just like sheer force of vocals, singers like Maria Callas for instance. She was like a rock star opera singer. When you read stuff about her, it’s pretty thrilling. There are people who are reckless with their voice, she was a wild woman, and it’s pretty cool. Like that style of singer, being considered reckless. Wow! Crazy!

M: There was opera, you have influences from rock music, from folk music, how would you define your own music?

LP: Huh, I think it’s a bit of all of those. Sometimes it’s almost like a folk opera, anthemic folk opera. I love everything from Freddie Mercury to Bob Dylan to Woody Guthrie. My taste is eclectic, I can really appreciate different voices, and I like to mix it up a bit, change voices and stuff.

M: “Lost On You” is a very personal song which is based on your relationship with a girlfriend. Do you think personal stories make better songs?

LP: You know, the human condition is… Has a lot of common themes in it, what happens to us and what we go through in life. I think that people read into stuff wrongly and rightly, when they listen to a song. But I think there is a combination of things that, maybe, the tone of voice and the lyric and the melody, that kind of stir up feelings that people have also had. And I think songs are a way to connect to each other, to feel, to know that we are not alone in our feelings, etc… If we feel something in a song, we can… it just heals us a bit.

M: I read that you were fired by your label because of this song, yeah?

M: What do you want to say to those people who didn’t believe in you?

LP: What I wanna say is, “Hey baby, it’s okay, love the one you’re with, do whatever you gotta do.” Like, as I say, one person’s treasure is another’s trash. I tell that story for a couple of reasons. I’m over it. I’m very lucky… What trips me out is the people who go through the same thing, who are discarded in a way, for something that was actually something. Think of all the painters that died before anyone even saw one painting, Van Gogh and people like that. And that kinda would blow his mind, to see what goes on today for his paintings. A lesson not to give up. And there’s something that goes on for people, I hope that they don’t give up.

M: I saw that you have a tattoo, a ship tattoo on your chest?

LP: I do have a ship tattooed on my chest!

M: What does it symbolize for you?

LP: For me, it was almost like the tail end of a really painful time in my life. I used to hate hate hate when people said: “It’s the journey! The journey!” I wanted to smack them in the head. And they were right, you know, it really is, and that’s a propos of what we were talking about earlier, it is what you go through. You can appreciate things more and more when you have been through something difficult. So I feel like the journey has made me who I am and it made me appreciate where I am. So, yes, that’s basically the symbol of the journey. I feel like a sailor in general. I mean I curse like a sailor, I live like a sailor, I’m all over the place, but, yeah. Ships are beautiful!

M: And what kind of journey can we wish you today?

LP: Ah, today, who knows. Who knows where I’ll end up. I think everybody’s journey, everybody’s life is gonna be ups and downs. I don’t really subscribe to the buddhist philosophy of not enjoying the highs or the lows. Just keep the lows at bay and enjoy the highs as much as I can. It’s my own “personal philosophy.”

Thank you, Veronica Tedderson, for your help with the transcript.

✶ The interview was recorded in the late fall of 2016 in Paris, France, and released at the beginning of January, 2017.

✶ MadmoiZelle – a French online magazine for women, in publication since 2005.

This has all been stunning, and particularly because of one thing – as a singer and performer, LP really doesn’t have to prove anything to anybody. We couldn’t imagine there would be any expectation for her to outdo herself yet again. At this level of artistic mastery, that would simply be wrong. END_OF_DOCUMENT_TOKEN_TO_BE_REPLACED

It’s so refreshing to listen to some challenging pop song from time to time. Something that stings your synapses a bit, leads you out of your musical comfort zone and straight into the wild. “The Beautiful People,” as sung by Christina Aguilera, kind of does that. END_OF_DOCUMENT_TOKEN_TO_BE_REPLACED

We were lucky enough to participate in this intimate event. But the show aside for a second – before the performance LP was interviewed on stage by Trójka’s host, Piotr Metz, who opened the interview with an earthquake kind of statement, which LP managed to handle, and beautifully. It was a very dynamic and immersive exchange, and it would be a shame if it got lost in the avalanche of the new interviews with LP popping up every day. END_OF_DOCUMENT_TOKEN_TO_BE_REPLACED