In the dawning moment, LP kicks off her 2018 American tour and she will take the stage of Sacramento’s Ace of Spades – the first of twenty three venues she’s gonna rock this winter. When we go through the list, we can’t help but notice the similarities with her 2017 European tour – comparable club sizes, analogous tour length… Just like the previous, 2017 American tour resembled her 2016 Lost In Europe tour. It’s interesting, almost as though the events in the US were exactly a year behind Europe for LP. It allows you to make some assumptions of what may be coming. Not only music-wise, but also as a standalone phenomenon, a one intense, unified experience. 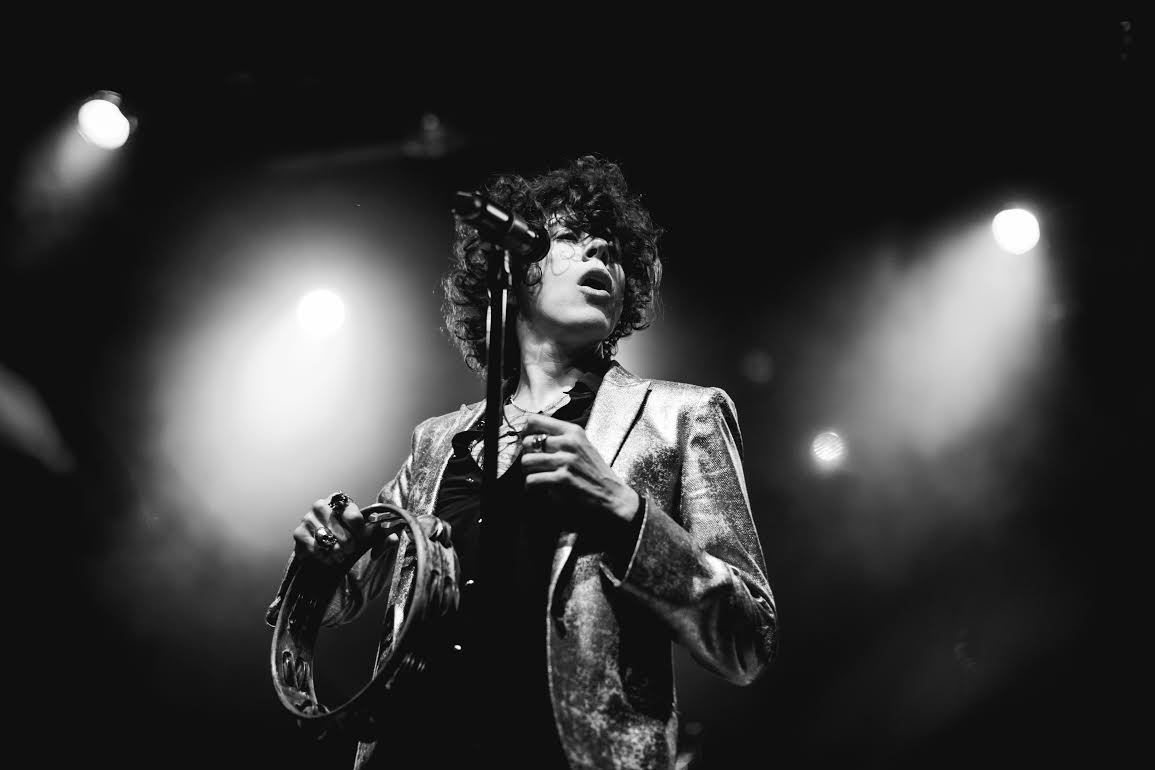 © Michelle Shiers, courtesy of the author

When we look one year back, we clearly remember this vibe, this magical tension hanging in the air. People were impatiently looking forward to LP’s 2017 American tour, and the closer it got, the more this impatience showed. Several days before the first concert LP rocked three major American late night shows. Her performances on Jimmy Fallon, James Corden and Conan turned out exquisite, and won both the critical acclaim and the admiration of newly entranced fans. No wonder – singing “Lost On You,” LP was nothing less than pure fire. Around that time she also played a show at the McKittrick Hotel in NYC, celebrating the release of the US edition of the Lost On You album, and it was simply out of this world. (This very performance triggered us to reflect and write about her style in general, performance-wise.) And as it later turned out, that American tour was another source of proof of this unbelievable skill of hers – yes, she gets you sky high, but she always can, and will, get you even higher. After she blows you away (as you knew she would) somewhere around the first verse of the first song, the actual ride is still ahead of you.

The tour opened in Vancouver and closed in Los Angeles, with LP wearing her gold jacket and regal boldness. She had already premiered all her new songs during her two European tours, and the US audience got to witness the thrilling execution of those polished diamonds. When a song becomes well established on the setlist, this is the moment when LP begins experimenting with it, taking the performance on with a new level of confidence. And this is exactly what happened – each song was catapulted to its top by her and the band. But not only that, there was also a pinch of spice added to most of them. (A bit later she took those songs back to Europe for the summer festivals, and the first show we saw was pretty lethal.) If we were to have to recommend some quintessential moment of the tour, to understand and capture the vibe of it, it would be the Chicago show. We wanted to write a separate article about this concert some time ago, but the sensation won’t translate into writing… You’ll have to put “lp lincoln hall” into your YouTube search engine and see for yourselves.

There was also a visual aspect to the last American tour, very much alluring. Those venues. Most of them resembling the dreamlike interiors the Twin Peaks’ Roadhouse. Even if we try very hard, we can’t imagine a more fitting space for absorbing LP’s stories. The red curtains, soft and hazy lights, one hundred year old chandeliers, the wooden dance floor, shining in its old age from hundreds of dancing shoes. Most of them were designed at the crossroads of Art Deco and Art Nouveau, but also fused with some elements of modern art with industrial touches here and there, and it’s that fusion of styles that defines the venues’ beauty. Not to mention their capacity of around 500… The Tractor Tavern in Seattle, the Star Theater in Portland, the Bluebird Theater in Denver, the One Eyed Jacks in New Orleans, LA’s El Rey… And, for dessert, just do yourself a favor and check out what kind of venue LP performed in in Canada – meaning Montreal’s Corona Theatre. 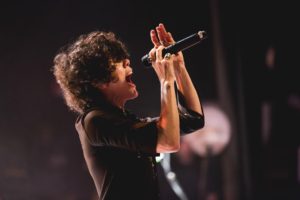 © Michelle Shiers, courtesy of the author

Fast forward to February 2018. The capacities of LP’s upcoming American tour have doubled and the tour runs non-stop. It’s been almost two years since she’s been constantly on the road, often playing shows back to back, and going from country to country, with not a single day’s break. Here and there we’ve read a bunch of stuff about how touring is perceived by musicians. It can literally make your hair stand on end. “Being on tour is like being in limbo. It’s like going from nowhere to nowhere,” that’s Bob Dylan. “Problem with touring is the vegetal state you get into,” Julian Casablancas. “I spent 15 years on the road between touring and recording and I never saw anything. I want to enjoy life,” Gloria Estefan. How lovely.

Yet, LP seems undeterred. And it’s not as if it doesn’t apply for her, this burden of touring. We’re sure she must be exhausted at times. But somehow, all you can sense from her is this thirst for doing just that, being just there. It’s life she brings with her presence.

And there is more to it – when the world makes a dangerous right turn, a non-heteronormative androgynous being, a descendant of immigrants, and intimidatingly talented one, may be just the answer. LP somehow brings a message that is, oddly, still kind of tabooed: it’s your innate right, and maybe even your duty, to take care of yourself and be happy with how you live your life. Not only does she nail smuggling this into most of her songs, she also does it intangibly. To be honest, very few artists are capable of passing the message in a way that’s not right-in-your-face. Which is, perhaps, on top of her writing and performing, yet another talent of hers, one that stands closer to witchcraft than to music. It comes from the way she is.

It also all goes with another aspect of being on the road. When it comes to LP, wherever she goes, she leaves a mark.  She’s almost like a trigger for some dormant process. We imagine this is what distinguishes people of true influence. It’s in her music, mindset, her style; her aura just don’t allow you to stay indifferent. And confronting your way of thinking with hers can change a lot. That’s why it’s so valuable: all these conversations, interviews and comments she leaves behind, all these people she talks with. Do the stuff you love, let others be, stay coherent with yourself, value diversity, fight for your dreams, know your craft, keep getting better in what matters to you, enjoy life, be patient – just some of her messages imprinted on many, and expressed without actually directly saying these things.

So catch her now, you lucky people in America, before you have to bring binoculars to see her, standing amongst a crowd 10,000 strong, because this is what is already happening in Europe. Now it’s a perfect fusion – the venues are still intimate, but also allowing over a thousand people to experience it together. The music and her stage presence will blow you away, her lyrics will cut you to the bone and stay carved in your mind, and there will be even more to it. She’s not the one who will give you the speech of what’s wrong and right, oh no. No idea how it’s done, but what you take home after this encounter is a newly awaken sensitivity and awareness, and ability to see more and, maybe, to act, to make things around you better.

Do not miss out.

✶ We’ve put together a playlist, allowing you a sneak peek into each of LP’s club shows off the 2017 American tour.

✶ To check out each location of the 2018 American tour – go to the Events section -> Past Events. All the entries in the calendar clickable.

✶ Check out the recordings taken during LP’s show at The McKittrick Hotel: “Tightrope”, “Other People”,  videos dated May 4th, 2017

✶ Here’s a few videos recorded during LP’s unbelievable show in Chicago during the American 2017 tour.

It’s probably a bit late for this, 15 months in, but we feel we should explain the intention behind our “outstanding performance” series. Well, an interesting thing about the general idea of standing out is that there’s always some grabbing element to it. END_OF_DOCUMENT_TOKEN_TO_BE_REPLACED

The Sofar Sounds performance instantly reminded us of yet another rendition of “When We’re High” that left us speechless. Interestingly, that other one was so very different when it comes to the vibe. It was a backstage thing that took place during the Hangout Festival, and was meant to be just a simple, casual set up of only an interview with a couple of songs sung in between questions and stories.  END_OF_DOCUMENT_TOKEN_TO_BE_REPLACED

LP sang it in December of 2015 at the Audrey Skirball Kenis Theater at the Geffen Playhouse during an event called Liner Notes: Songwriters, Stories and Music with Rita Wilson and Friends. Reportedly, LP was Billy Steinberg’s guest. From what we read, it seems to be an extraordinary and refined occasion, but it was possible to be there – all you had to do was buy a ticket for more than a fair price.  END_OF_DOCUMENT_TOKEN_TO_BE_REPLACED