It’s quite easy to get confused about the complex story of LP’s career. Fortunately, the RDS Radio interview comes to the rescue. It’s surprisingly facts intensive and provides an accurate timeline. The conversation happened at the beginning of what had begun after the song “Lost On You” had hit Europe, and it was one of LP’s very early promo appearances of this era. And this one is definitely worth watching. 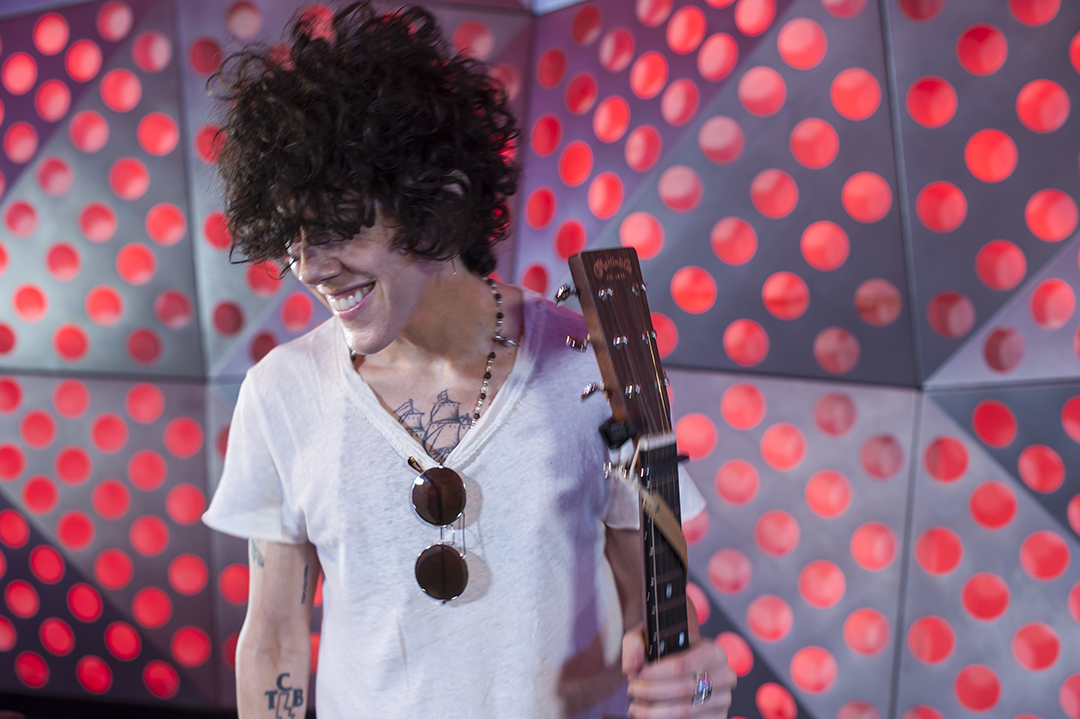 Not sure what RDS Radio did to LP, but she managed to tell her story in one breath, starting from the late nineties and going up until now, giving a lot of details and comments on the way. It’s like the last fifteen years in a nutshell, the must-see version for everyone who has just begun to be curious about her.

The interview video is also a nice throwback to fun times, when every single conversation with LP was interlaced with “Lost On You” video snippets, making all those hundreds of European promo videos look exactly the same. They were all made in a similar manner: starting with that famous bass line and then featuring snippets of chorus with fragments of the video of beautiful Laura Hansons Sims squeezed in between LP’s words. The (lack of) imagination of the media creators… But, yes, we chain-smoked all of them last fall.

Apart from this short and very raw interview, there’s also a live performance at the RDS studio from the same day; “Lost On You” of course, what else, but played with Trevor Menear and his, so to say, slightly “joyous” approach to the song. “Lost On You” gets a lot of lighthearted accents here and seems a bit like a French song from the 70s when he plays it. It’s probably not what’s best for the song, but we’re addicted anyway. And we absolutely love LP’s shout just before Trevor’s spectacular solo part. LP was frequently playing her small Martin back then, and we really do miss this guitar – its sharp but melodious sound and, of course, a unique shape. Hope LP hasn’t dropped it for good.

LP: Hi, this is LP and I’m doing a video interview with RDS.it

LP: I was doing it for a while, like late 90s, early 2000s… I was writing songs and doing it, we call it DIY – do it yourself. I was driving around in a van with my band and playing shows all over the US, small shows where we go and… sometimes there would be a bartender working at the bar and that would be it. So we’d play the whole show to the bartender. And the bartender would have some friends down and then, you know. So I had a little thing happening and that led to… I got a major label deal in 2006 with Island Deaf Jam and then Universal and for three years I was working as an artist writing songs for myself to put out. And I had had some indie records before that. So I wrote a lot of songs with a lot of big songwriters, I learned a lot. But no record ever came out. I got dropped or whatever before it came out. But some songs started getting grabbed for bigger acts, and the biggest one at the time was The Backstreet Boys. And then I got the publishing deal, which is like a record deal for writers. I started writing for other people. I thought that was gonna be what I did. And I loved it. I was cool with that ‘cause I’d been long time trying to do my stuff. So. And then I got a big song with Rihanna, and I was getting through songs with other big people, Christina Aguilera and Rita Ora. Then my managers told me to start playing and writing songs for myself, ‘cause they wanted me to keep singing. And I was like, “okay.” I was inspired, I started just playing the ukulele. ‘Cause I played guitar, but I just started playing ukulele. And then I wrote a bunch of songs and I got another record deal with Warner Bros. and I put out a couple of records. And now I have another deal with Vagrant.

/RDS: Question about how she started singing/

LP: I think I was in the backseat of the car and my mom was driving. I was singing and I had a vibrato. And she sang opera when she was young. I think she was driving and she was like… [LP turns back] And I was like [LP makes an “ooops” face]. I was embarrassed, ‘cause my voice had a vibrato.

LP: Sometimes I am. Sometimes it’s something I wrote for myself. A lot of times when I do write something for myself it gets picked up or looked at for another artist, because it’s very… It hits home, you know. But I find it, especially now, the more I go for my own thing I write very explicit for my experience.

/RDS: Question about being the ambassador for Martin guitars/

LP: I was, like I said, just starting playing the ukulele and I had just bought an ukulele, like an expensive one and then my manager called and said: “Hey, Martin wants you to be… They wanna make you the first female ambassador for Martin” and I said: “How did that happen?” The woman that did it saw a picture of me first and liked my style, that I look like… whatever. And then she heard my music and she loved it and I said: “Well, will they make them [guitars or ukuleles] with me?” and she said: “Sure!”

/RDS: Question about the tragedy in Orlando in the gay club/

LP: It’s a great tragedy as far as where we are in the world and that someone would still… I think it really shows that… Because that individual that did this is just a very confused individual. And I think that a lot of actual racism or prejudice comes from very confused people. ‘Cause they’re not really seeing what it is. And I think that it’s sad that… That just means that it should be over, but we still have work to do as far as cleaning up this confusion. And just by being yourself and living truthfully I think that will keep making strides toward that, but it’s very sad.

✶ The interview was recorded at RDS Radio studio in June, 2016, in Italy.

She performed the most catchy element in their song “Gone” – the background whistling. We probably don’t have to explain that she nailed it and simply whistled it like a whistling angel.  END_OF_DOCUMENT_TOKEN_TO_BE_REPLACED

Oh, we love ourselves a few good pop tunes. They can pump up your energy sky high, regardless of their topic. (Just take a look at what we have here: in “Every Day” there’s this intense heartbreak, while in the second one, “Nothing To Lose,” there’s a story of how one can screw up a relationship that was actually really something. Pretty miserable, isn’t it, so why are we dancing?)  END_OF_DOCUMENT_TOKEN_TO_BE_REPLACED

The event took place on May 14th, 2012, at the Museum’s Clive Davis Theater. It was ticketed, so if you had $15, you could be there.  Being the GRAMMY’s event, the occasion was quite classy and so was the musical set up. And it’s another chance to see and hear LP perform live, with Joey Dosik accompanying her on the piano and Nick Rosen playing the string bass. That’s not all, there’s also violin, so let us just put a full stop here, you know. END_OF_DOCUMENT_TOKEN_TO_BE_REPLACED