In June 2014, LP talked to Stylelikeu’s online fashion magazine about what she likes to wear and what accessories she picks to complete her look. She talks about her rings, shoes and shirts, and admits that she wouldn’t mind going to the beach wearing Yves Saint Laurent. 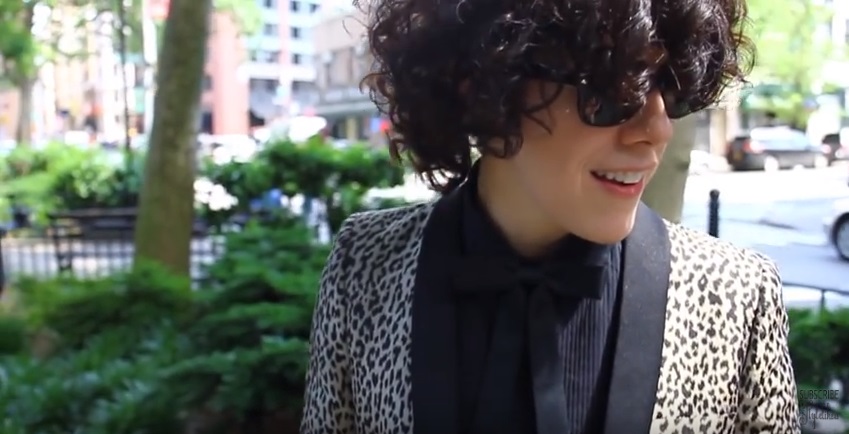 It’s one of the rare interviews where LP discusses her look, giving brand names and explaining its evolution. And it’s a cool story with LP’s life journey as background. Starring her iconic leopard-print jacket.

I don’t go for the classic ideal, obviously, of the feminine beauty, in the clothes. It’s a statement to your house, and I really kind of learned that and respect that. I was always like a tomboy. I had a partner that was a fashion designer. She is very educational, like, get a little tidier, get a little smaller, you know, get more streamline. I think I’ve gotten less baggy and less baggy, and less baggy. You know, it’s like I’ve shrink-wrapped myself.

I’m wearing Saint Laurent right now. This jacket, this shirt, this is a vintage Saint Laurent tie. I feel like blazers always pull it together, like you wear a blazer over a T-shirt. I kind of like to be dressed up. I don’t mind being at the beach in Saint Laurent. I’m wearing Carol Cristian Poell shoes. They’re crazy beat up. They have a sheen like they are a little bit beat up, but no, they really are beat up now.

This earring is like an old, old… a friend’s older brother was a PA on like a Madonna set one time, and this is from one of her videos, back in the day, and he had had it and he gave it to me, and I’ve just been wearing it for over ten years.

This is from Barking Irons. They have some jewelry and they do T-shirts, they did T-shirts for Kings of Leon. And then these are Alex Streeter.

I think that in my teenage years I was more about music and it started to dawn on me that that’s what I wanted to do. I don’t think I really believed you could do it.

I took my mom’s death. She was an opera singer. She never communicated that for me. I was just a kid, I don’t think she wanted that. I think a part of her was not being expressed. A missed opportunity to express yourself sometimes will change the chemistry of your body. And I see it in the way I dress. It’s my expression. Whatever someone’s gonna say, hey, you look a little crazy, you look this or that, you just gotta do it and pursue it. And, the only way I knew how which was just putting a couple of people together and playing in a band and playing out in the city and stuff, and not really knowing and being directionless.

When I had my first indie deal and it didn’t work out, I just was like, “What am I gonna do, I don’t know what I’m gonna do,” and I’m just, like, I’ll just keep making music. Figure out a business of your heart and your dreams, and just keep going.

Being doubted and being looked at as different or weird or whatever totally trumps conforming and screaming inside.

✶ Yves Saint Laurent – a website always worth visiting, offering you an LP look whenever you can afford it
✶ Barking Irons – New York based design company
✶ Alex Streeter – a creator of jewelry worn by many rock stars

“No Witness” is a bit like a sip of vodka, offered up by a splendid, rapacious stranger on a slow night train from Lviv to Odessa. Or perhaps a street cut drug. You are not sure what’s safer – to go for it or refuse the invitation. And you somehow feel that the choice is only some rhetorical issue, for your fate has already been decided: you’ll be rendered blind or end up in some kind of paradise.  END_OF_DOCUMENT_TOKEN_TO_BE_REPLACED

Their conversation is casual and not really in-depth, but there are some things about it that make it probably one of the most beloved interviews with LP, ever. Firstly, the video features one precious rarity: at the end of it they play ukuleles and LP sings “Cheers,” which she wrote for Rihanna.  END_OF_DOCUMENT_TOKEN_TO_BE_REPLACED

The interview grants us some insight on the story behind her latest songs and on her musical and political views. She opened up about all of the above a bit more than she usually does. The interview has been put into the written form in a very skillful and precise way, because, reading it, you can almost hear LP speaking the words.  END_OF_DOCUMENT_TOKEN_TO_BE_REPLACED