LP’s American radio promo tour, which began in mid-January and lasted, on and off, until early March of 2017 (“off” meaning, e.g. singing at the Sanremo Festival or talking with all the major UK press houses in London), is one of our favorite moments of her career. It’s packed with breathtakingly intimate acoustic performances and fun, effortless interviews (Just a wild guess, but it seems likely that when you’re an American returning home after a few months of answering questions in Europe, an effortless conversation in your own language, within a well-known cultural framework, must be just about the coolest thing ever for you). The tour was happening in a super interesting period of time, right after she got big in Europe and finished her first, triumphant European tour. She still had fresh memories from it, and when asked about it, which occured many times during the American promo tour, she shared a lot of accurate and amusing comments on what she had experienced. We’ve covered some parts of that tour already – we wrote about LP’s appearances for Kink Radio in Portland, for 94.7 Fresh FM in Washington, and also during the events at the Winter Jawn Festival and at the World Cafe, both in Philadelphia. And today we have for you an interview that comes from this very radio promo, but which is entirely different in style – a vibrant conversation with 98.9 WCLZ. 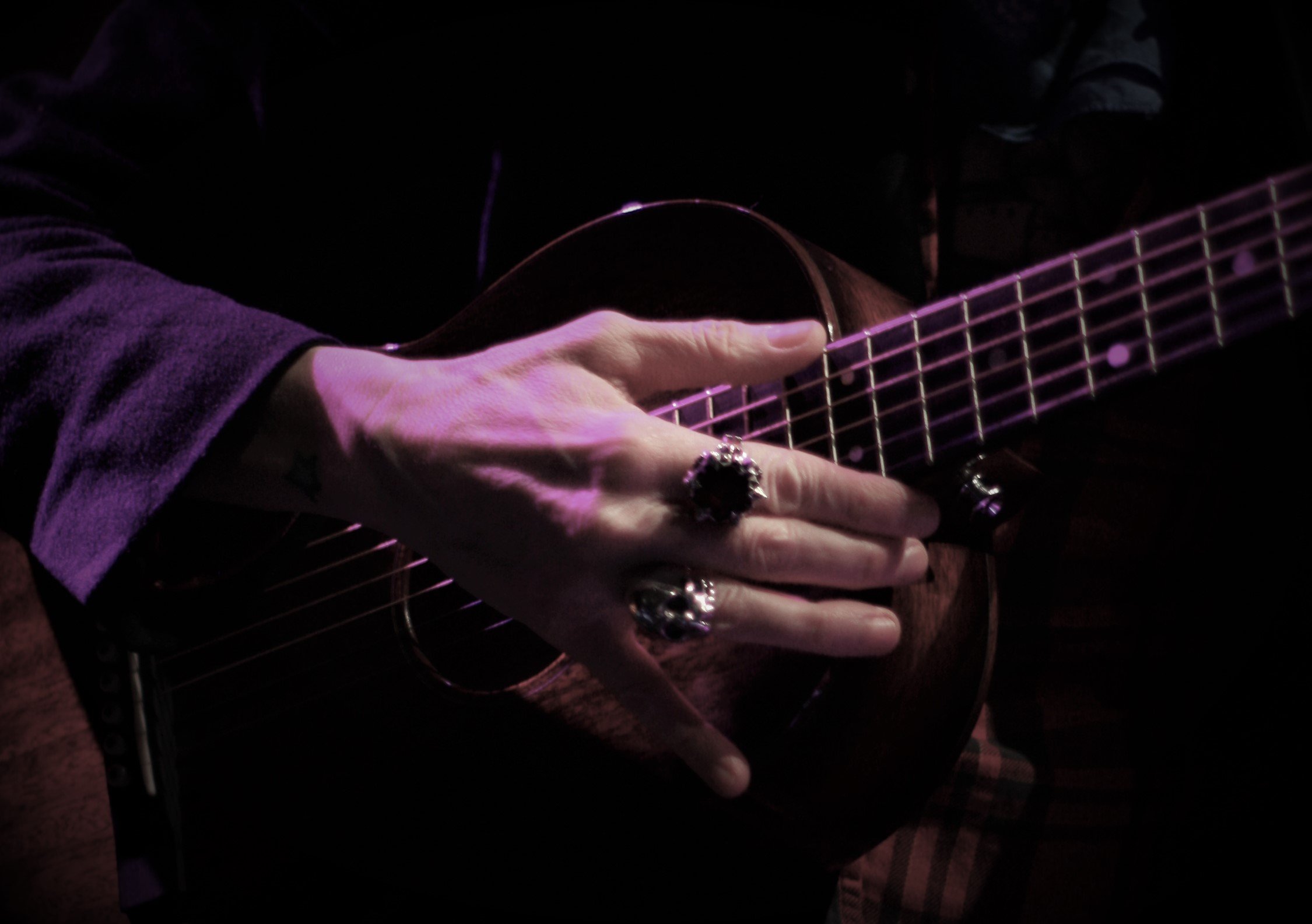 © Veronica Tedderson, courtesy of the author

LP talked with 98.9 WCLZ in Studio Z on January 20th of 2017 in Portland. It’s an absolutely beautiful and intelligent conversation (it doesn’t get any better in life than when beauty and intelligence come together, does it?), based, surprisingly, on some of the answers that LP gave during her European interviews in the summer of 2016. All due respect for the well done research job of the host! (He kind of amazed LP by that too, as she purred “wow, I love these questions!” towards the end of the interview.) We get to learn more about how Noelle of Fitz and The Tantrums was involved in enticing LP back to the stage and what were the symptoms of her own personal “Jim Morrison phase.” There’s also quite a lot said about one very interesting factor that increases the likelihood of LP keeping the songs she wrote, instead of giving them away to some other artist – one that’s surely detectable anyway, but here she’s said it point-blank.

Apart from the interview, LP sang three songs for the radio – “Lost On You,” “Other People” and “Into The Wild.” They were the acoustic versions, played with JD. And they infallibly bring that very familiar aura of what always happens when she sings in such a setup – the world outside gradually fades and, tone by tone, disappears.

The interview is available in the audio format only and, as always, we’ve transcribed it for you. It goes well with a glass of wine, and so does the songs she plays. You’ll find all of it below, enjoy!

Radio: It’s 98.9 WCLZ, Studio Z edition. The first thing I wanted to ask you about, is the story that you had told about going to see Fitz and The Tantrums, I don’t know how many years ago it would have been, a couple of years back, and you said that seeing that show, seeing her sing made you wanna sing again. Can you tell that story?

LP: Yeah, that’s cool. I like that you ripped that out of the archives. Yeah, it was probably like six years ago, maybe seven, and I was just newly living in LA. I’ve been back and forth several times couple of years before. I was going to this place, Bardot, near the Avalon in LA. It was before I started singing at this weekly thing that they had, and Fitz and The Tantrums were this band that my friend told me about. It was a couple of years before they even got their deal and all that stuff, and started. But Noelle, who’s a friend of mine, was singing. She wasn’t really a friend yet. And I just remember… Sometimes singers – and I don’t know about other singers, but as a singer, if I hear someone singing and they make me wanna sing, I’m like, “Oh, wow!” It’s very interesting kind of… I almost can’t control myself. I’d been doing the writing thing for about a year and I was really happy, ‘cause I’d been through the major label system and I didn’t have… A record never came out, but I got to be a songwriter through it, and I was actually really enjoying it. I was cool. I think that was the first little hit of like, “Oh man, I maybe wanna sing a little!” And not even with any thought of being an artist again, just it made me wanna sing. I think it was just my… It’s my true nature to be a singer, and you get to do that as a songwriter. It’s not like, you know, you go around not singing, you have to do that. I sing all the demos when I write songs for people.

LP: Yeah, it’s the same! It takes a minute to realize that. I think that, sometimes when you’re in a band or when you’re a songwriter, you’re always… You’d write a song and you’d be like, “This might be really good! This is the one! This is the one!” And you keep saying that, and it may well be the one, or may well be a hit or whatever, but it doesn’t matter. And the biggest songwriter still has to come up with another one. When I realized that, I was like, “Oh!” It’s a little like Buddhist, like, “don’t enjoy the highs and the lows” thing, but… Not really, it’s just work, and I feel like once I took it as an actual job that had to keep going, it was actually a relief. It was more of an anxiety ridden feeling that I was always kind of trying to get The Song.

Radio: I think that’s a good advice for anybody, for just whatever you’re doing: there’s gonna be no sense of arrival, I’m not sure, of anything.

LP: Exactly! It’s that thing that people say about, quote unquote, “the journey,” that used to drive me bananas and I wanted to kill someone.

Radio: And so now, when you are… Will say, “more than just a writer,” which I think even as a writer you’re still not “just” a writer, but what makes you write a song and say: “This song is for me, it’s uniquely mine, somebody else could not sing this song.”

LP: Umm, I think sometimes the way I sing it, or the lyric, how personal it is to me. I try to, even with my own thing, even if they’re very personal, to keep them universal appeal. I think a lot of times it’s the difficulty factor of the actual vocal. If I love singing it, and I’m like “Yeah, that’s hard…” Something like that. There’s something about… It’s very difficult to articulate.

Radio: What is that viewpoint when you hear, see somebody singing the song that you wrote?

LP: I love it. Yeah, I don’t have any… I love it. That is almost… more rewarding, ‘cause it’s kind of like… Of course you’re gonna sing your song. But when someone… this business is so competitive. It’s ridiculous. It’s a very difficult business, obviously. Everyone wants in. So when someone else is singing a song I wrote – I feel very honored and kind of wow, great, thank you.

Radio: I noticed you slipped in that “almost”, it’s ALMOST as good!

LP: AL-MOST as good! It’s almost as good as doing it myself, yes.

Radio: And the last thing I wanted to ask you about is you described certain part of a musician’s career as that, the “Jim Morrison phase.”

Radio: Can you describe that?

LP: Haha, I love these questions, nice! I think that “Jim Morrison phase” is that early phase when you’re in a band. Especially singers, I notice, front people. It’s just kind of like, “Hey man, just hanging out backstage, and some nerdy guy comes up and says ‘Hey! I really think you got something! I think I’m gonna sign with you a deal and let’s go! Let’s run! Let’s run with this, this is great!’” Like, this ridiculous hussle. I’m sure it happens sometimes for some people. That’s the lottery ticket kind of thing. And most of the time it has to do with the song, these days. You know, I have friends, like, their life just took off in a moment. Mostly because of a song, not usually just playing a live show and someone came back, there’s always a lot more work. And the Jim Morrison phase, usually inevitably leads to “feeling sorry for yourself” phase, after several years or after a couple of years after Jim Morrison phase and nothing goes down. The you’re just like, “Nobody wants to hear me! Then forget it, man! I don’t care!” There’s many phases, I should write a book about the phases of that, like, compared to the phases of death.

Radio: Twelve-step program. We’re with LP, the latest album is Lost On You, and with international hits, we’re so happy that you could take some time and be with us in Portland today. Before you get out, you wanna do one more for us?

✶ Fitz and The Tantrums – an American indie pop band formed in LA around 2008.

✶ Noelle Scaggs – an American musician and singer-songwriter from Los Angeles. She fronted a soul band, The Rebirth, and in 2008 she became the co-lead singer of Fitz and The Tantrums.

John Patrick Gatta, a freelance journalist and photographer, who talked with LP for the Relix Magazine’s spin off, Jambands, asked LP some really good questions. And didn’t ask any meager ones! They talked in the early fall of 2014, a couple of months after the release of LP’s first major label album, Forever For Now. END_OF_DOCUMENT_TOKEN_TO_BE_REPLACED

Oh, we love ourselves a few good pop tunes. They can pump up your energy sky high, regardless of their topic. (Just take a look at what we have here: in “Every Day” there’s this intense heartbreak, while in the second one, “Nothing To Lose,” there’s a story of how one can screw up a relationship that was actually really something. Pretty miserable, isn’t it, so why are we dancing?)  END_OF_DOCUMENT_TOKEN_TO_BE_REPLACED

LP wrote this song with her mentor, Billy Steinberg, alongside Billy’s long-time songwriting partner, Josh Alexander. It could have happened around 2011, when LP was writing songs for her then upcoming record, Forever For Now. They were collaborating extensively back then, as they also wrote “Savannah” and “Salvation” together, each of which made it onto the album (and also “Magic,” which will appear on the deluxe version.) END_OF_DOCUMENT_TOKEN_TO_BE_REPLACED