Let’s go back again to the American radio promo LP did back in January / February of this year. On Jan 15th, she performed during an open air event called Winter Jawn, in Philadelphia. It’s organized annually by the alternative Philadelphia radio station, Radio 104.5, and no matter the weather, whether it’s freezing and snowing or otherwise, all the events are held outside. And this year it was really freezing. 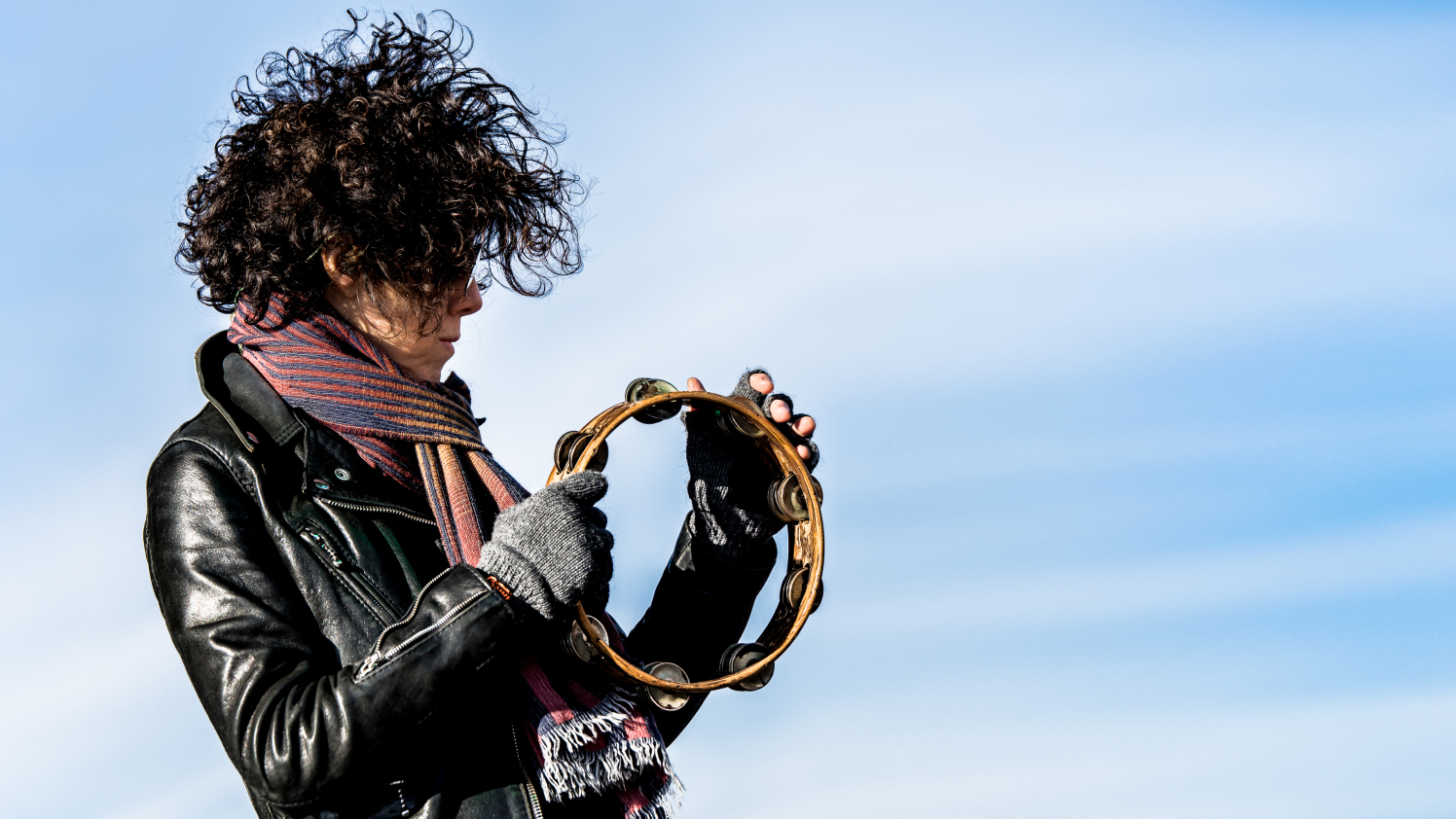 © Matt Christine, courtesy of the author

Before her gig, LP gave a short backstage interview, and it’s a real fun watch for a number of different reasons. We have it for you today together with a full transcript. The conversation is interestingly unbalanced and her laid-back answers give some funny contrast to the interviewer’s energy. The apogee of the interview was when they were discussing the topic of a career as a doctor and it simply makes you wanna watch it again and again.

The interview is also interesting if you enjoy observing how the place you live shapes your point of view. And also, if you suffer from, say, eurocentrism, it might help you deal with it. See for yourself: what is Europe for Philadelphia? Some random, strange place out there in the world. And, funny thing, it really is. How beautiful is that? It’s kind of obvious, but still, fascinating how one tiny thing can change your perspective on, well, basically everything. There’s nothing more eye-opening than Americans discussing Europe, and the other way around.

And one more thing: to the author of the photo, Matt Christine, THANK YOU SO MUCH for this particular shot!

Winter Jawn: We are backstage at the Winter Jawn, formerly Winter Jam, with LP. Welcome to Philadelphia.

LP: Thank you. What was it called before?

WJ: Well, it was Winter Jam for a long time. We’ve been doing this crazy thing where we come out in the middle of January and play outside…

LP: Yeah. ‘Cause, like, “Winter Jawn” does not roll off the tongue, I mean…

WJ: But the lawyers got involved and so we can’t use “Winter Jam” anymore, somebody else does that, so when people are watching this video we might want to edit that out. But “jawn” is like uniquely Philly term…

WJ: …that if you’re not from Philly they’re, like “Why are they calling it ‘Winter Jawn’ ?” But if you’re from Philly… [not audible]

LP: Ah, I see. See? I’m, like, educated again! First you taught me Japanese and now you’re teaching me what they really say in Philly.

WJ: Everybody, I’m Facebook live, missed the Japanese though.

WJ: We’ll bring that back later. So, how much experience have you had in Philly? Have you performed here before?

LP: I have, I’ve done, like, small club shows. Don’t remember the place, but, yeah, one of my old guitarists, he was from Philly, so he used to come back here and I stayed with his parents when we were on tour and stuff.

WJ: We meet a lot of artists who have people on their bands who are from Philly area, there must be something in the water here. Or the jawn.

LP: Yeah, it’s a very musical town. And I heard… I heard it’s starting to become, like, the new… Young persons Manhattan kind of thing.

WJ: We have a lot of the same, like, opportunities here that you have in New York and we’re very accessible to New York, but it’s a lot more affordable to live here than in New York.

WJ: And actually it’s a really great city. And we have Winter Jawn.

WJ: You’re from the Northeast, you’re from Long Island, right?

WJ: When they told you we’re doing this outdoor concert in Philly in January, did you look at them, like: “You’re crazy” or…

LP: You know, honestly, I don’t look at my schedule too hard when it’s that far in the future, but, like, I don’t really understand why – “Winter Jawn”? You guys are nuts, man. I don’t know. Go out in the cold!

WJ: So, your album is called Lost On You and you sort of have a duo career as a performing artist, but you’re incredibly accomplished songwriter also, writing big songs for Rihanna, Christina Aguilera and the list goes on and on. When you write songs for LP versus other artists, is there… Do you have, like, files on your computer, like: this is something that sounds like me, this sounds like something that I’ll use somewhere else… How do you manage all of that?

WJ: What’s the… In terms of people who have used your songs – what was the biggest surprise when someone calls you and says: “blank wants to use your song.”

LP: That was weird. I mean, the other ones I kinda wrote for that person. Yeah, I’ve written the song a while back with Tim Armstrong from Rancid – that’s another weird part about the song. We wrote the song together and he was working with Joe Walsh, of all people, and then Joe Walsh did that song and I was like: oh wow, huh!

WJ: How old were you when you wrote your first song?

LP: I think probably like late, late teenage years. I didn’t really think I was gonna be a musician, I thought I was gonna be like a doctor or something.

WJ: All right. Do you still practice being a doctor sometimes in your spare time?

LP: Just when I’m alone with somebody.

WJ: Oh! Ok! All right! So are you… you’re playing Winter Jawn today. What’s going on next for you? Are you touring by yourself or you do festivals?

LP: I am going back to Europe, I have European tour for, like, six weeks after this… After this radio tour.

WJ: Have you toured Europe much previously?

LP: Yeah, I just did one in December. November and December. One of my… “Lost On You” is, like, kind of, like a hit there.

LP: Yeah, I’ve been, like, last six months I’ve been like nonstop in Europe. “Lost On You” went no. 1 in almost twenty countries and it’s gold and platinum in a lot of places, so I’ve been touring nonstop there, to be honest.

WJ: Have you shown up in a city and not really expecting much and you got there and there’s a full house of everybody who knows every word of your songs and you’re like: wow, what does it come from!

LP: Yeah, in all of them. All of them that I’ve gone to. It’s been a beautiful, pleasant surprise.

WJ: Cause I talked to some artists who… Just these random places that they had no idea they have this huge fanbases that they weren’t even expecting. They show up there and there’s like a sold out room and they’re like…

WJ: Awesome. We appreciate you coming here and playing with us today.

LP: Ryan! Thank you, bud. You wanna come out and play a little triangle with us or something? [Ryan: Sure!] All right. Cool.

WJ: Awesome. LP. The album is called “Lost On You”. Thank you for playing Winter Jawn!

✶ Joe Walsh – legendary guitarist, American singer-songwriter, composer, multi-instrumentalist and record producer. Most famous for being a member of The Eagles. His guitar in “Hotel California,” which is in fact an interplay between him and Don Felder, has been named one of best guitar solos of all time. Interestingly, LP wrote a song for him, titled “Hi-Roller Baby,” which appeared on his album, Analog Man [2012].

✶ As for videos from this gig, there is not much available online. The only song that can be found on YouTube is “Lost On You.” Apart from this, LP also performed “Muddy Waters,” “Strange,” “Tightrope,” “Up Against Me,” and “Into The Wild” that day. And this is the first time we see a new face in the team on stage, her drummer, Elias Logothetis.

We believe that one of those times was when LP performed “Little Lion Man” on June 8th, 2011 in Los Angeles. We are so grateful to the wonderfully considerate person who recorded this amazing performance.  END_OF_DOCUMENT_TOKEN_TO_BE_REPLACED

Carrie Lyell, from Diva magazine, talked to LP the day after the absolutely mind-blowing show LP gave in the Koko club of London. We were lucky enough to witness that gig and we remember very well the energy in the room. END_OF_DOCUMENT_TOKEN_TO_BE_REPLACED

So, “Black Dog.” After watching “LOY” and “No Witness” at Jools, followed by ITV’s “LOY” again and “Halo” we were, like, “…ok, how about watching a little ‘Black Dog’ by her?” So we did. And after we saw it, we knew it’s something to write about as our next material for you.  END_OF_DOCUMENT_TOKEN_TO_BE_REPLACED