Oh, wow, how much we dig the new song LP premiered recently, “Girls Go Wild!” It brings so many different images that it’s tempting to just sit down and write a hundred paragraphs about it. But fortunately, it triggered a particular line of thought instead, which, after taking us through many winding roads, from West Coast to East Coast, has finally brought us to one particular song and one particular rendition, nothing less than outstanding – “Your Town,” played by LP for Guitar Center Sessions Hollywood, back in 2014. 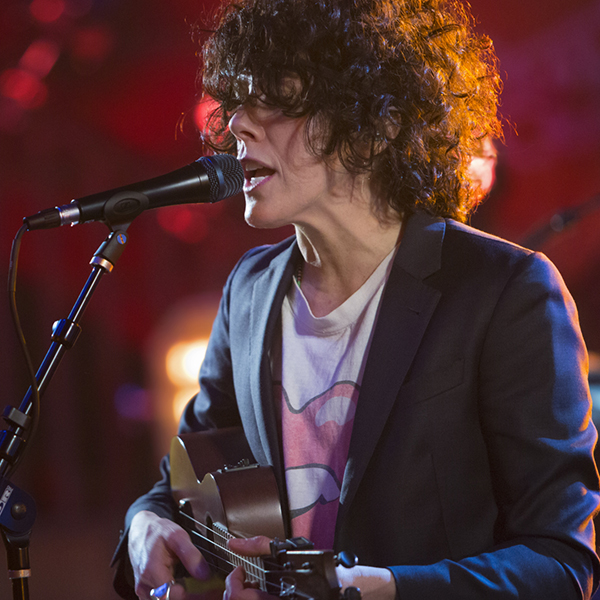 It’s probably a bit late for this, 15 months in, but we feel we should explain the idea behind our “outstanding performance” series. An interesting thing about the general idea of standing out is that there’s always some grabbing element to it. And whenever you get to be the receiving party, you’re granted this rare opportunity of letting it influence you in some peculiar way. Quite often it happens within this old and cliché (but, oh, how stirring!) framework of pleasant pain. Never mind how many different emotions an art brings to you, this particular impression will almost always be there. And so, hunting the performances that do that to us is the general idea behind the series. Long story short, LP’s “Your Town” is a perfect example of a song that lifts you up by breaking your heart, which feels very bad and very good, simultaneously. While played live, stripped of the big production its album version got, it simply nails its confusing grip on your limbic system. (We’d say, shyly, that this is a trademark of LP’s writing and performance. This sense of standing on the edge of an abyss gets into your blood, and you just want to stay there – off-balanced, unsure, but entirely satisfied at the same time.)

There are just a few live recordings of “Your Town” available, but the song was lucky enough to be chosen by LP to be played during a couple of prestigious events. One of them was the Guitar Center Sessions, where she performed a few songs off of the Forever For Now album, in the summer of 2014. The Sessions are intimate music encounters, filmed at the Center’s Hollywood Vintage Room, hosted by Nic Harcourt (two years later LP and Nic would meet again for his famous “Transmissions” series.)

LP talked a bit about the inspiration behind the song in an interview for KCET, saying: I moved away from a relationship that was very deep for me. (…) ‘Your Town’ is a little bit more of a hit over the head: I went to her town, saw a bunch of things and it made me really sad. And for Crave Online:

“Your Town” is a song… It’s about when you leave a town, I left New York, and I’ve been living in LA and, you know, I had a significant other there that I wasn’t with anymore. It just felt weird, it was the place when I’d grown up and spent so much time, and then I felt like I didn’t live there anymore, it was like being a stranger in my own town.

The Guitar Center “Your Town” performance begins with LP playing a couple of soft and soothing chords on the ukulele. The Center’s great sound system makes the instrument perfectly audible throughout the entire performance, which is impossible to accomplish in a club set up. The arrangement made the song sound a lot more cohesive compared to its album version, where the dissonance between the low-key intro, collected verses and really ponderous chorus can be a bit obtrusive. But you don’t get even a fraction of that here. The song flows gently through the first verse with one heart stop at make the cold wind feel okay, and what you get right after is three seconds of silence, with only a delicate drumroll building up tension for the smooth chorus to unveil.

And it’s the chorus where some strange magic happens between LP and Aaron Steel’s percussion. He is a brilliant drummer (that myriad of sounds, wow!). But often when they played together, Aaron’s powerhouse drums were so intense that all the other instruments, and even sometimes LP’s vocals, were a bit overwhelmed. But in the Guitar Center studio you can hear the perfect balance struck between the two of them. The sound of the drums enriches LP’s singing and highlights the drama in her voice instead of downplaying it. And when the song gets bigger in the second chorus, one more factor lets LP’s voice sound even more stunning, and it’s the company of Tim Fagan’s warm and melodic backing vocals. Oh, Tim was a real expert in supporting LP, and he nailed the creation of this unbelievable background that enabled her voice to shine even brighter. So, for the second chorus, we get a perfect match of vocals contained within the sound of the drum. LP’s final touch to the song are those unbelievable ad-libs, which are also one of our favorite moments on the album. Those ad-libs, we won’t dare to describe. They kill.

There is more. We absolutely love the contrast between the emotional charge that the song brings and LP’s cool and distanced delivery. (Then again, there’s likely no other choice, and your stage presence simply has to match this Rolling Stones t-shirt you’re wearing.) There’s no actual despair in the way she performs, which, of course, triples the despair in the song. It’s so precious – this moment when, on top of the art of writing a song as such, there’s also an art of performing it, and on top of that, there’s still this choice of method for the performance, which may make it stronger in an unexpected way. And this applies not only to the song’s presentation.

“Your Town” is all about strong emotions, but the lyrics never call their names. So when you feel this unbounded longing, the core of the song, it’s there because it had been placed there in an indirect, beautiful manner. And it always serves the art well, no matter if it’s a poem, a song, or a performance, when raw emotion gets shaped in the way an artist wants it, and it’s taken under control and made to serve their vision, and not the other way around. It’s beautifully done for “Your Town” and makes the song a dark horse of the Forever For Now album. LP’s talked a bit about this approach and a kind of “writing from a distance” for Men’s Up magazine. She said that, when writing about strong emotions, it’s always beneficial to wait a bit, sometimes even a year or so, before sitting down to a song. It helps to conjure those intense feelings and write about them in a conscious way. LP has nailed that already, when writing songs for her Forever For Now album, “Your Town” in particular, and then took it even further for her latest album, Lost On You, full of laser focused and brilliantly composed songs. It also applies for her brilliant new song, “Girls Go Wild,” which makes us hungry for more, and always more…

✶ LP for the Guitar Center Sessions – “Your Town”

✶ LP wrote “Your Town” with the producer, Justyn Pilbrow, and the singer-songwriter, Claude Kelly, for the Forever For Now album, released in 2014 by Warner Bros. The album version of “Your Town” was produced by Justyn Pilbrow, who also played the guitar and base for the recording, while the ukulele was played by LP.

✶ It was also these three who wrote another song for Forever For Now, “Free To Love,” which LP, interestingly, decided to recently include on the setlist for her current American tour.

✶ Apart from “Your Town,” LP played also “Night Like This,” “Tokyo Sunrise” and “Into The Wild” in the Guitar Center studio. Go to the Session’s website to watch them.

✶ Guitar Center – one of the biggest musical instrument retailers.

✶ The performance was recorded by Degraw Sound studios in New York

✶ Tim Fagan – an American singer-songwriter and guitarist. He grew up in Hawaii. Tim released two studio albums: Whirlpool (2004) and Tim Fagan (2011), and an EP Out Of The Dark (2006). While he was a music director for Colbie Caillat, he wrote the song “Lucky,” and won a Grammy Award for it. Tim was LP’s guitarist around 2014, playing with her during her Forever For Now promo.

✶ LP premiered her new song, “Girls Go Wild,” during her show in Sacramento, on February 9th, opening her American tour. She also performed an acoustic version of the song for the KRVB “The River” Boise, Idaho on February 16th. And then played its concert version the same day, in the evening, at Boise Knitting Factory Concert House.

And it wouldn’t hurt to loosen up every now and then. Cher is Cher, and she’s fabulous. Whenever the conversation leads up to her, that’s the ultimate conclusion. Come on, not every single thing you put on has to carry this straightforward arty vibe, right? END_OF_DOCUMENT_TOKEN_TO_BE_REPLACED

AMG: Do you have any strange of funny stories from the road?
LP: We were in the backwoods in this random, random Starbucks and then Montell Jordan said ‘hi’ to me. The girl he was with said she liked my shoes. If that’s not awesome, I don’t know what is. I don’t know, there’s a lot of things that happen on the road that can’t be spoken of. The road is like Vegas. Things happen.  END_OF_DOCUMENT_TOKEN_TO_BE_REPLACED

A little bit of background. Somewhere around 2008, LP moved away from writing for herself. She dived deeply into songwriting for others, and was collaborating with many people in the industry, creating songs of very different genres. She usually calls this period in her career “songwriting school.” END_OF_DOCUMENT_TOKEN_TO_BE_REPLACED