Yesterday, for the first time since May, we played ourselves the Lost On You album. The last few months were all about LP’s live music – first the European tour, then the American one, then the festival season. And then, finally back home, and actually moving to our own place at last, we unpacked the speakers and put the album on as a soundtrack for sorting out all the rest. Ten seconds in and there we were: two deer in the headlights, staring at each other with disbelief. And we stayed there, in the hallway, frozen over an unopened box of cleaning supplies for the next hour or so, till the very last sound of “Long Way To Go To Die.” 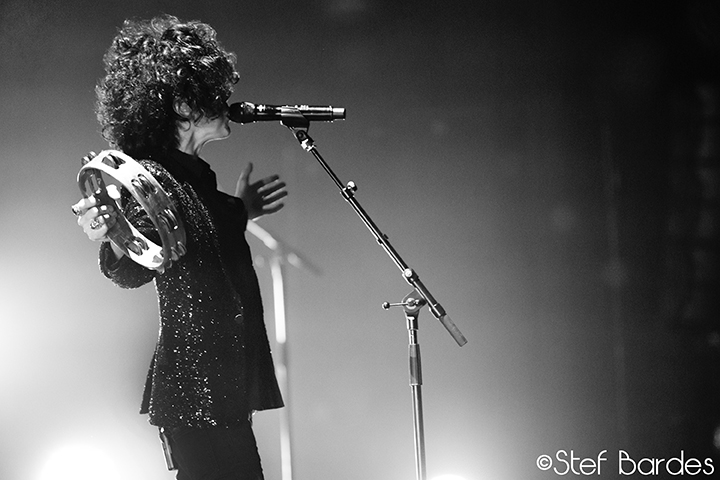 © Stef Bardes, courtesy of the author

Oh god, this album is SO GOOD, so exquisite. If you are in constant touch with this music, you just forget about it, and it becomes some kind of certainty of unknown origin. But take a break, maybe even one month will do, and then come back and be shocked all over again, exactly like it was the first time around. It’s this kind of distinctive, original music that has no obvious reference or inspiration, a stand-alone work of art formed by a truly indie mind. Does the Grammy committee hear us?

Anyways, it all starts with “Muddy Waters,” doesn’t it. We know its credits, but it must have been written by the medicine woman, not by a songwriter. Seriously. This is a song we’ve been playing to those people unfamiliar with LP’s music, and always to a predictable effect: a newborn admirer. And so, when LP told Billboard two months ago that if you’re new to her music, she would recommend to start with “Muddy Waters,” for it’s a kind of foreplay, we were happy she verbalized that. Because, yassss, it is.

It is hard to say why. This is what it is all about – often you can’t put a finger even on things that differ craft from art, so when you dare to search for arguments for something outstanding within art, as such, well… good luck. “Magnificent” is the first word in English that comes to our minds when thinking about “Muddy Waters.” There is something to the composition of this song that calls for your attention. One of the reasons is the amplitude of sounds – there is the complete silence and next to it stands an immense, vast sound.

Quite a few articles have been written about it. MTV: On the standout track, ‘Muddy Waters,’ she plays with the juxtaposition between power and vulnerability. The song’s loping rhythm forces it to do battle against its own constraints. Over an insistent work-song foundation, her voice turns from needy and ethereal to defiant. Music Supervision Central: […] it is full of deep, rich harmonies that are haunting and mysterious, yet full of beauty. The deep ‘hums’ and rhythmic undertones provide the roots on which LP floats and dances atop. The artist also showcases her wide vocal range on this track with her feisty, confident lower register opening the song, and becomes vulnerable with her crystal clear upper register as the song progresses. Variance Magazine: [Muddy Waters] has a completely new energy, raw and gritty, earnest and spellbinding. What else could we possibly add here…?

So there we were, listening to “Muddy Waters” in a dusty hallway wrapped in some plastic decorating sheets, standing over a few unpacked boxes and cans of paint, bursting out with, “Oh, and this! And that!” over and over again. “The beginning with the drums is almost like a heartbeat!” “Oh, that suddenly spacious sound from the second verse!” “Those haunting background vocals!” “And the electric guitar at the very end, can you hear it?” Eleven months after we first heard it, having heard it a hundred times since, yet we just couldn’t stop. One hour later we knew something had shifted – a reunion with the album versions of those songs, a validation which we didn’t really need, it just happened.

Let’s have a look at “Muddy Waters'” pedigree. The song was born in London. LP and Josh Record were working on it in a studio that was, well, quite a challenge. It was a really junky one, as LP described it. She told the BUILD series that the process was like caveman songwriting, with a very bad computer, which didn’t really want to cooperate that day… And there were those weird chains on the floor for some reason, which ultimately they used for the song. You can hear them in the very first seconds of it. While working on “Muddy Waters,” LP and Josh were getting enough frustrated with the shitty studio to finally give up after a while and take it to Josh’s house to finish the song off. And later, as she told the Liner Notes, it was hard for her to let go of the demo, but Mike Del Rio convinced her it will do good for the song if they go bigger, because it was going to get lost in the noise out there. They thought it would be great to make it a bit more gospel, and so they invited Maiya Sykes and Charles Jones to do the gospel parts. The outcome was, of course, amazing.

The song was first released in 2015, standing as LP’s debut on Vagrant Records. It was featured in the closing scene of the season four finale of Netflix’s series, Orange Is The New Black. BMG quoted LP on their website: ‘Muddy Waters’ is definitely a relationship song, but while writing I just kept comparing my situation to how we treat our planet. We just keep destroying and destructing, and we know we’re doing it, but we keep going anyways.

And speaking about relationships, we have a very special one with this song. It’s closely connected to how we discovered LP’s music. Long story short, right after hearing her voice for the first time, one of us put “Muddy Waters” on repeat and played it a thousand times, because it was the only song which was bearable while suffering from a very first fever in twenty years. Was the fever caused by the music? Was the music helping to heal the fever? The story is peculiar. Kind of – the universe is talking and you don’t understand shit. Maybe we will be able to tell it one day.

✶ Click here for the album version of “Muddy Waters”

It’s peculiar, the way we came across The Mars Volta. It was some ten years ago, on some old pen drive of unknown origin, when we found an mp3 off The Mars Volta’s second album, Frances the Mute (2005). The music got our attention right away. Quite likely, the way the band loosely speaks with the early work of Pink Floyd did the trick.  END_OF_DOCUMENT_TOKEN_TO_BE_REPLACED

Charlotte OC’s story in the music business is no fairy tale. In 2008, at the age of eighteen, she got signed to a major label, Columbia Records, which initially wanted to release at least four albums by her. But the deal didn’t work out and she was dropped.  END_OF_DOCUMENT_TOKEN_TO_BE_REPLACED

Said songwriter, she who called LP that day, was Stacy Barthe. It was an unexpected and exciting invitation, and in fact, a moment which would become a milestone in LP’s career. The session was part of a writing camp set up by Rihanna’s label to write songs for Rihanna’s new album. END_OF_DOCUMENT_TOKEN_TO_BE_REPLACED