First things first – LP only starts singing after the reverb levels in her headphones, in the Degraw Sound studio of New York, become “cool” enough. When the first notes of this live rendition of “Night Like This” begin, it’s a pleasure to hear the more natural and gentle instrumental intro instead of the really heavy drums recorded for Forever For Now. Here, in the Buzzsessions performance, it’s simply the elegant sound of the percussion entwined with the noble 12-string guitar melody line. 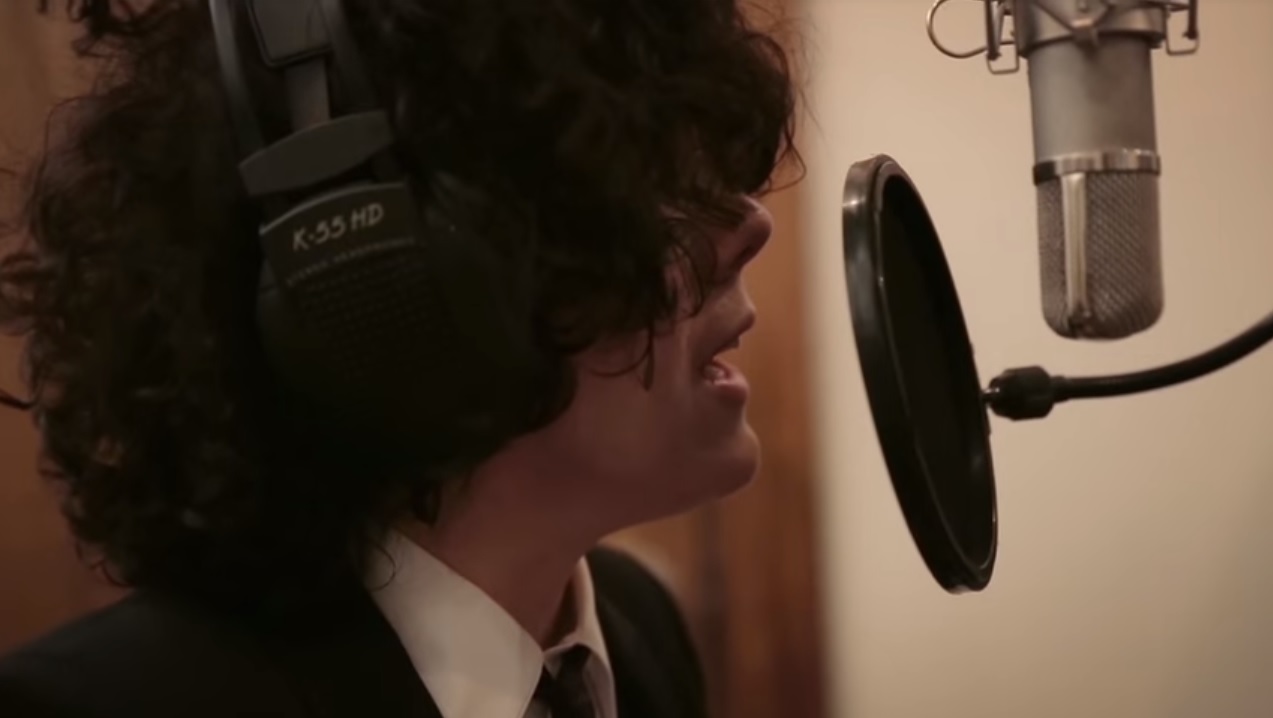 Still frame from the Buzzsessions video

We love this recording for the beautiful balance of vocals-guitar-drums, which is difficult to achieve on stage (especially when you have a drummer as fierce as Aaron), and which was definitely left off of the record. The ukulele is perfectly audible and the percussion creates a pleasant background for LP’s voice. Also, note the omnipresent, professional cloth thrown over one of the drums; though it could never beat the old blue and white t-shirt Aaron placed on his drums for the Forbes performance.

“Night Like This” is a bittersweet song, inspired by “an ex,” as LP told Balcony TV. On the songwriting side, there is quite an interesting story about how LP recorded this song for her album, Forever For Now. It was something she wrote for herself, but due to some misunderstanding between her and her manager, the song was presented to Shakira’s people while LP was still working to finish it. Here’s how she told the story, step by step, for WFPK Radio Louisville in 2014:

“Night Like This,” I almost didn’t use that song. Shakira bought it to use. I think she purchased, or they found a bunch of songs, that were this certain kind of song, and that she was gonna do a record like that. Then she swerved at the last minute and did what she’s doing now, the more dancey stuff. But they really wanted it. I remember, they were really upset when we took it back. Because it was just a whoopsie kind of situation. My management thought that I didn’t want it, and I was like: “yeah, I don’t have a bridge for it yet” and I just was thinking I have to finish it, not that I didn’t want it. Somebody else pitched it and then it got picked up and then they played it for Rob Cavallo, the producer of my record, and he was like: “Nah, I think you have to do this.” I was cool with Shakira doing the song, honestly. I didn’t mind. I thought it would be kind of cool. But I’m glad I kept it, for sure.

“Night Like This” is a lovely song for sure, although it got a massive amount of production on the Forever For Now album. We love the live versions of it (acoustic or not) and we are always thrilled to hear it live. Sometimes we wonder how it would have sounded if Shakira had recorded it, but it would have been a shame if this song had disappeared from Forever For Now, as it’s definitely one of its highlights.

✶ LP performing “Night Like This” for the Buzzsessions

✶ The video was released by The Wild Honey Pie, as a part of their Buzzsessions series in January of 2016, but it must have been recorded earlier, around 2014. LP was accompanied by Aaron Steele on the drums and Tim Fagan on the guitar. Tim also supported her with his fabulous backing vocals.

✶ Short article about session with LP by The Wild Honey Pie

✶ Tim Fagan – an American singer-songwriter and guitarist. Tim released two studio albums: Whirlpool (2004) and Tim Fagan (2011), and an EP Out Of The Dark (2006). He was LP’s guitarist around 2014, playing with her during her Forever For Now promo.

Never before has it been more tempting to go on about our perception of LP’s lyrics. “One Night In The Sun” just boils and freezes one’s conscience in singular still frames of the hazards of an ending love. And LP, as an experienced heart surgeon, is very precise and clever with her cuts. The words are so dazzlingly brilliant. Maybe the best we’ve ever read from LP. Tangible, sensual, sunburnt. END_OF_DOCUMENT_TOKEN_TO_BE_REPLACED

When you play yourself LP’s 2014 album for the very first time, and when you hear its bursting opening track, “Heavenly Light,” it prepares you for everything but for how the album ends: with a quiet, gentle ukulele, tender whistling, and vocals with something inconsolable to them. END_OF_DOCUMENT_TOKEN_TO_BE_REPLACED

When LP opened her American tour back in February, she put one new song on the setlist, the brilliant “Girls Go Wild.” In June, she kicked off her Summer European Tour similarly, introducing another new song, “Dreamer,” at her tour opening show in Italy. END_OF_DOCUMENT_TOKEN_TO_BE_REPLACED