Tonight feels like a night for a truly electrifying performance of a song quite rarely sung live by LP, as played during her sold out show at The Roxy Theatre back in 2014. LP says the song is about her, quote unquote, deciding to fuck up her life once more, with somebody. In short, “One Last Mistake.” 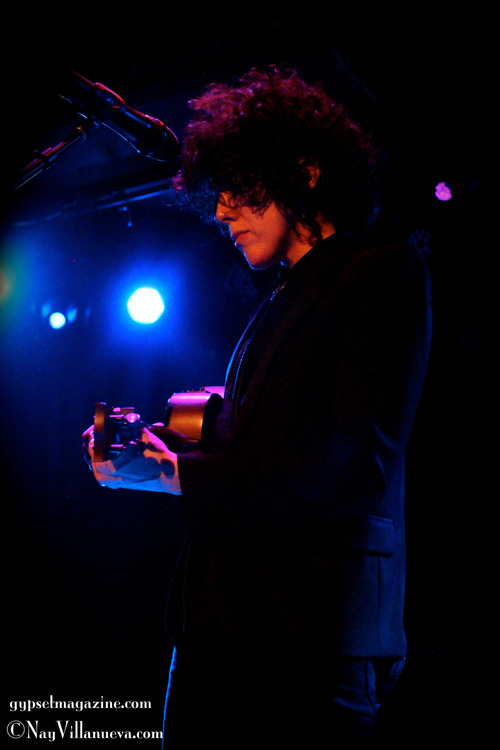 LP at The Roxy Theatre, © Nay Villanueva, courtesy of the author

It was one of the songs written by LP for her then-upcoming album a bit later than others, and soon it turned out that the song changed the landscape of Forever For Now, as LP put it. It was a surprise to her. She felt “One Last Mistake” was a bit different than other songs and that it broadened the stylistic scope of the record. The collaboration with Kid Harpoon helped her bring out an interesting, Fleetwood Mac-kind of sound for the harmonies (and LP said she usually doesn’t know how to achieve this particular effect.)

The performance of “One Last Mistake” at the Roxy Theatre is breathtakingly magnetic. We absolutely love its dark, strict vibe in addition to LP’s clear, perfect vocal. We kind of felt similar ambience in Stockholm during her opening show for the Smoke Em If You Got Em tour. There’s probably no way to compare a live show to the video, but we vividly remember LP’s expression when she tuned her guitar before each song, being completely focused and on her toes. And comparing to how she sang “One Last Mistake” at the Roxy Theatre, other available performances of this song are much calmer, almost serene. They usually bring this singalong, happy feeling, while at The Roxy Theatre it’s somewhat somber but also dramatic (check out the sound of her voice at 2:00!) LP seems one hundred percent present and mindful, both in terms of the show itself, but also in terms of the lyrics (just watch her sing “I see someone I don’t know”…). She plays the ukulele and sings the song with undistracted engagement. Her voice is clear and she hits every note as if there was a metronome on stage, in front of her, but still she keeps these rock and roll edges untouched. The performance enchains the viewer not only because it’s spot-on, but also because of some whimsical atmosphere around it. Where does it come from? There’s no way to tell – it may be the day, it may be the mood, it may be something quite different…

The show took place in the fall of 2014, which LP often describes as a very difficult time in her professional life. Her record had come out a couple of months earlier and now she was fully aware that it wasn’t going to be promoted by the label. The people who were behind her had left Warner Bros., and in fact at that time she was parting ways with the label too. Also, around that time, she wrote “Lost On You,” definitely being one of her most intense songs. We wonder if these circumstances, however heartbreaking, might have had some impact on the way she sang “One Last Mistake” at The Roxy Theatre, making this performance so thrilling and unforgettable. Or maybe that’s just the skill.

✶ This performance took place at The Roxy Theatre in West Hollywood on September 26th, 2014.

✶ “One Last Mistake” is a song off of the Forever For Now album (2014.) It was written by LP and Kid Harpoon and produced by Rob Cavallo, who also played the guitar part.

✶ Kid Harpoon – an English musician and singer-songwriter. Associated with artists and bands such as Florence and the Machine, Jessie Ware and Harry Styles.

✶ Tim Fagan – an American singer-songwriter and guitarist. Tim released two studio albums: Whirlpool (2004) and Tim Fagan (2011), and an EP Out Of The Dark (2006). He wrote a Grammy-winning song, “Lucky,” for Colbie Caillat. Also, outrunning 20,000 other songwriters, Tim won John Mayer’s songwriting contest for best music written to Mayer’s lyrics. Tim was LP’s guitarist around 2014, playing with her during her Forever For Now promo.

✶ Aaron Steele – drummer percussionist based in NYC & LA. He played with LP during her tour with the band Kodaline (Feb/March 2014) as well as during LP’s Headlining West Coast Tour in September the same year (7 dates.)

✶ That night, LP played several songs from her Forever For Now album, plus a cover of “Something” (The Beatles). Here you can read the review of the show by the Gypset Magazine.

It was the fall of 2011 when LP got signed to yet another major label, this time to Warner Bros. It was a particularly intense and fortunate period in her career as a couple of months earlier her song “Into The Wild” got picked up for the Citibank commercial. END_OF_DOCUMENT_TOKEN_TO_BE_REPLACED

LP talked with 98.9 WCLZ in Studio Z on January 20th of 2017 in Portland. It’s an absolutely beautiful and intelligent conversation (it doesn’t get any better in life than when beauty and intelligence come together, does it?), based, surprisingly, on some of the answers that LP gave during her European interviews in the summer of 2016.  END_OF_DOCUMENT_TOKEN_TO_BE_REPLACED

LP seems quite relaxed and comfortable in madmoiZelle’s big and cozy armchair. It would also be fair to point out that it is one of the these interviews where the journalist is attentive and having a casual conversation with LP, instead of ticking off a Q&A session, which is nice. END_OF_DOCUMENT_TOKEN_TO_BE_REPLACED