Hello to all of you out there who watched LP’s latest performances with your hearts racing – here is an article for you. We saw her recently play a gig in Koko, we saw her performing in Jools Holland show, and finally, we saw her on ITV’s Weekend. There was something in those performances… Something that made us wonder about the way she used to sing, several years back. We can’t put our fingers on it, it’s elusive and undefinable. Something we absolutely love. 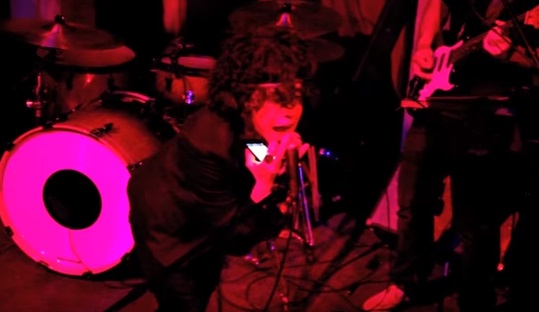 So, “Black Dog.” After watching “LOY” and “No Witness” at Jools, followed by ITV’s “LOY” again and “Halo” we were, like, “…ok, how about watching a little ‘Black Dog’ by her?” So we did. And after we saw it, we knew it’s something to write about as our next material for you.

In 2010, LP was a regular guest in the glamourous Hollywood club, Bardot. One of the songs she sang there was Led Zeppelin’s “Black Dog,” this one in particular performed during one of Bardot’s cover nights.

The performance itself is quintessential for her way of rocking the stage throughout her songwriting years. She was wild, authentically rock’n’roll and untamed. But let’s just stop here for a moment to peer at her ways of performing on stage over the years.

She started off in the late 90s as a young rebel, inspired by classic rock bands, treating her voice mercilessly with screams, and interpreting songs in a very much nonchalant sort of way, aiming at being the coolest person on US stages. She perfected her way of performing, taking more and more control over her voice and her show in general. We can see her in her top rock’n’roll shape in 2010-2012, when she entertained Hollywood folks in Sayers, Bardot, etc. After that, the Warner Bros. deal happened and she played countless shows all over US, singing beautifully, but letting go of the show-off part of her presence on stage. But then, gradually, over the next couple of years, she mastered her new style: a stunning, to-die-for style we all know so well from her two recent European tours. She has become an exquisite phenomenon on stage, fusing a regal and intensely commanding way of performing with endless “black-leather-jacket” coolness and irresistible sensuality. The ultimate rock and roll lady. And this seemed to be the status quo for the last year. And then Koko happened.

Seeing LP in Koko and on British TV shows last week, we instantly thought that there was something new in the way she behaves on stage. She seems to bring out some more of her, dare we say, wild, “Bardot” side, fusing it with her elegant style. The result? Lady-rockstar meets mystic 70’s rock frontmen. Totally mind blowing and exceptional. Watching “Lost On You” on Jools and “Halo” on ITV, we literally nearly died of wonderment and, judging from reactions on social media, we weren’t the only ones. Mainly because we wouldn’t imagine that her recent style could get any more striking. She is still on the rise, not only fame-wise, but primarily as an artist, ever changing, redesigning herself and incorporating into her style whatever she sees fit.

So, “Black Dog.” See it for yourselves. No need for any description here. Just brace yourselves and go.

Their conversation is cool and relaxed, yet in-depth and thrilling. The interviewer is clearly interested in what LP is saying, and you can tell he really likes her music and style. They discuss pop music, career choices, Chicago’s agenda for LP (well, fingers crossed for her upcoming Chicago gig on June 9th), whistling, songwriting… We  l o v e  this interview.  END_OF_DOCUMENT_TOKEN_TO_BE_REPLACED

While you may think that you already know these songs too well, keep in mind that the sound quality during Spotify Sessions is spectacular,  and also, LP commented on each song a bit with her characteristic swag. END_OF_DOCUMENT_TOKEN_TO_BE_REPLACED

LP wrote this song with her mentor, Billy Steinberg, alongside Billy’s long-time songwriting partner, Josh Alexander. It could have happened around 2011, when LP was writing songs for her then upcoming record, Forever For Now. They were collaborating extensively back then, as they also wrote “Savannah” and “Salvation” together, each of which made it onto the album (and also “Magic,” which will appear on the deluxe version.) END_OF_DOCUMENT_TOKEN_TO_BE_REPLACED