Music is a powerful tool, and much more powerful than one has in mind in the very first moment of thinking about it. Truth is, it can do things many people don’t expect it to do, until they finally see it first hand and the very experience hits them. These moments are of different varieties. Most have to do with emotions. But then, some of them are very much physical and some even spiritual – both most startling while they happen. They are to be remembered forever. Like a swift, violent change of your heartbeat, or having a sudden vision.

And the nature of music played live is that until the performance comes to an end, it is a process of creation, it is the unknown. And there’s this interesting paradox to it, too – while everyone present on stage stands on their own, at the same time they are one organism, immersed in the song’s conception. And sure, they can sound great together, sure they can deliver the song impressively, but sometimes it happens that some magic element comes out on its own, then and there, and it elevates the performance and the music on yet another, unreal level. For us, one of these moments happened only a few days ago. And so, there is a solid reason why we’re writing about “Muddy Waters” as LP played it during the Blue Balls festival in Lucerne last week. 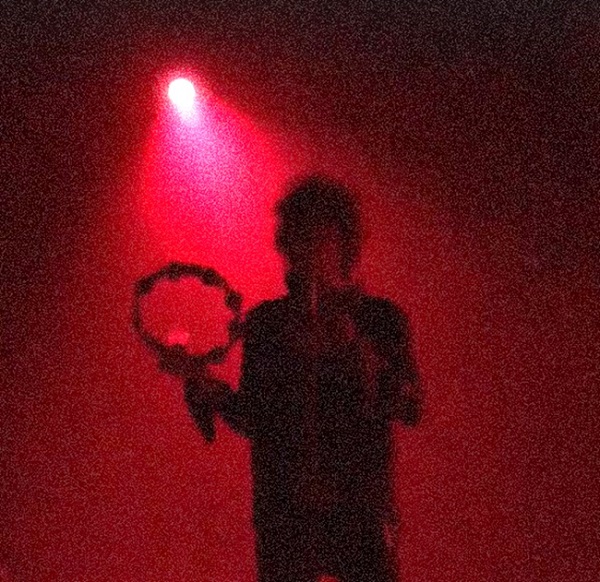 The only thing better than listening to “Muddy Waters” is witnessing “Muddy Waters” being played live. Out of the many jaw-dropping moments that go on in the contemporary arts (‘cause they do, if you look hard enough!) this one kind of takes the prize. LP is quite a mysterious and inscrutable artist, and she remains so no matter how long and how closely you look at her, trying to figure out some, or… well, any answers. She’s wildly and beautifully non-definable. But also entirely human. And if you want to touch the very core of how it feels to be around this kind of elemental force, any live rendition of “Muddy Waters” will give you exactly what you need. And when the circumstances are special and we’re talking of an outstanding performance… well, it’s really hard to even wrap your head around it.

“Muddy Waters” has always been the highlight of the show, every single time. LP seems to be taken away by it, to places only she knows of. Maybe the reason is her poetry, so exquisite here and essential for the song, or maybe her unreal ability to connect to something else, outside or inside of herself. No idea. As a song, it is many things – it’s this bundle of emotions, it’s the “Requiem” in her repertoire. For us, personally, “Muddy Waters” is significant, as it was the stone to start an avalanche. While “Lost On You” was the proper trigger to finally ask that “what is going on…?” question, it was “Muddy Waters” that performed some mysterious procedure on our minds, sat us down and made us hear what she had to say. And in Lucerne, just a week ago, the song did that again, only much stronger.

As if “Muddy Waters” could even be more powerful than what we had already known and witnessed before! But we remember vividly the shivers it gave us in Lucerne. And we remember the looks we gave each other when she sang “All the spirits gather ’round like it’s our last day.” Thinking and talking about it now, it’s quite likely that up to Lucerne neither of us had ever taken our eyes off the stage during that song before, as it is really a ceremony you’re a part of (because what else it could possibly be, with this beautiful nod to the entrancing gospel tradition, with all these tambourines and crying voices…). Yes, this time, there was something in the air.

Thank gods it was recorded, this performance. There is this beautiful way in which LP’s vocals correspond with the song’s instrumentals. These two elements seem to amplify each other in some special way. And the musicians do such a beautiful, exquisite job here. The rhythm section carries the weight of the song, the guitar moves it forward, the keys and the track make room for LP’s vocals, while she unveils the full beauty of the song with her unbelievable voice. All the layers combine into one gorgeous image, a piece of art lasting for little over four minutes. And this evening all the song’s components are pushed a bit further – the darkness of the rendition, the depth of her vocals, the way she commands the performance. Just a tiny nudge. And then there’s this overwhelming energy of the second verse and the bridge, and the spectacular finale with the prolonged ending and a new arrangement LP prepared for the summer tour. All the spirits gathered round this ceremony, all under the red light of the lunar eclipse.

To put a cherry on the cake, we have to say we all got lucky for one more reason. Lucerne’s KKZ Concert Hall writes on their website that “its unique acoustics promise an unforgettable sound, and have inspired the world’s best conductors, orchestras and soloists to perform at their very best” and oh, it is not an exaggeration. The sound was just insanely good. The first rows during the shows usually miss out on a great deal of the experience, sound-wise. But here, every register was beautifully audible for everybody, and that is a rare treat. What a fine work of engineering. We were delighted.

The video we have for you here is barely the surface, a shell, but we’re so happy it exists, nonetheless. Yet, there’s so much more to the performance than could possibly be transmitted through any recording. And in order to look inside and understand what happens when LP evokes this energy in the room, you just need to go see her play live. One can only try to describe it (as we have), or to catch a glimpse of it by filming it (as our generous benefactor did), but there is nothing even close to what really happens right then and there. It is as personal as it is communal, it is as spiritual as it is physical. It is tangible, it is substantial. Real.

And thank you so much, @addictedtobooks / YT, for uploading the video!

THE QUEEN OF THE NIGHT

All right, let’s get to it, shall we?  END_OF_DOCUMENT_TOKEN_TO_BE_REPLACED

Heart To Mouth, a new record by LP – The Experience. Part I.

Zu: Listening to unfamiliar music, as much as it’s thrilling, is demanding, no matter if you like the artist or not. Actually, perhaps all the more so if you like the artist. I guess it’s different for everybody, but when I put a record on for the first time, my head starts to play tricks on me and tries to solve every equation and find the answers instantly, or even ahead of the curve. END_OF_DOCUMENT_TOKEN_TO_BE_REPLACED

The interesting thing about Nic’s programme is that his guests are invited to exactly the same set of 21 questions. Meaning, every single person is asked exactly what the others were. One could think that this might turn out generic, that it’s a gimmick, a journalist’s clever idea, easy to get away with, to invest little and to get a huge return. END_OF_DOCUMENT_TOKEN_TO_BE_REPLACED