The summer of 2016 was, obviously, a very special time in LP’s career. “Lost On You” was already a huge hit in Europe and her calendar was completely booked until the Fall for different TV and radio shows, guest performances, concerts and festivals. In September, just before she played her three memorable big shows in Greece and Romania, she had visited Paris to play a sold out gig at Café de la danse. During that visit, she made a little detour and played a couple of songs at the French Le Grand Studio RTL. “Other People” was one of those songs, and we have it for you today. 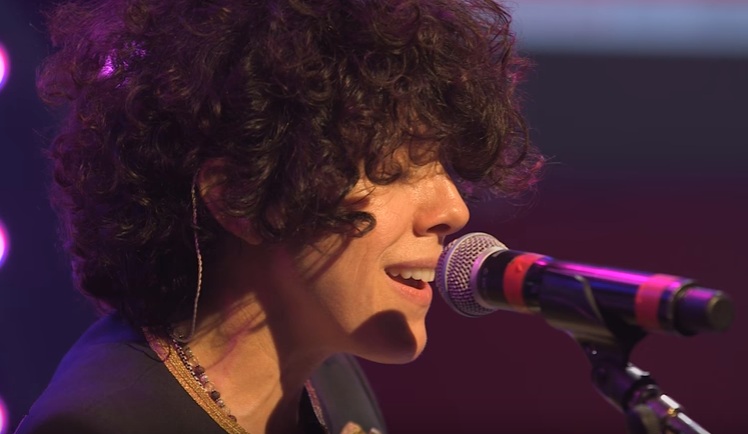 When we first saw it, we were in awe for a couple of reasons. But truth be told, we’re not really sure how to write about this performance and not fall into a very bad writing trap, because some things are simply better off without any commentary or description. But, well, this performance is just too good. So this is just a light touch, nothing else would fit.

And talking about things being more powerful when they’re simply left alone, with no pressure and no pushing: this is exactly what LP did with “Other People” in Grand Studio RTL. It was sung in the most delicate and low-profile way, and that’s why this performance is so electrifying. When you’re a singer, gifted with a really powerful voice, it takes a lot of artistic intuition to intentionally take a step back and give a song some space, so as to make it even more compelling. LP did precisely that, and the effect is dazzling. It’s not her voice, nor the guitars, that are the most important here – it’s the song itself. She brought it to the foreground, letting it shine, and yet it was almost whispered. Paradoxically, the silence and the peacefulness of this performance strengthens the emotional expression of this song. She chose to highlight only singular moments, and you can recognize them quite easily – this is when you listen to her and suddenly your heart misses a beat. Like here: she swings you beautifully throughout the first verse until she gets to “and wanted something else” – that’s the first heart stop.

The way “Other People” has been crafted as a song is just one of those clear examples of LP’s intelligence and instinct as a songwriter. She explained a good bunch of times that she deliberately waited for about eight months to write this song, although she already had the title “Other People” in her head. She also knew what she wanted to say with this song long before she actually wrote it. She said she had to wait a bit to be exact and precise, not to let the emotions take over the good writing. So she took a step back, just as she did when performing at RTL. We probably can’t say anything else than simply: respect.

Have a beautiful watch!

So, “Black Dog.” After watching “LOY” and “No Witness” at Jools, followed by ITV’s “LOY” again and “Halo” we were, like, “…ok, how about watching a little ‘Black Dog’ by her?” So we did. And after we saw it, we knew it’s something to write about as our next material for you.  END_OF_DOCUMENT_TOKEN_TO_BE_REPLACED

Said songwriter, she who called LP that day, was Stacy Barthe. It was an unexpected and exciting invitation, and in fact, a moment which would become a milestone in LP’s career. The session was part of a writing camp set up by Rihanna’s label to write songs for Rihanna’s new album. END_OF_DOCUMENT_TOKEN_TO_BE_REPLACED

LP wrote this song with her mentor, Billy Steinberg, alongside Billy’s long-time songwriting partner, Josh Alexander. It could have happened around 2011, when LP was writing songs for her then upcoming record, Forever For Now. They were collaborating extensively back then, as they also wrote “Savannah” and “Salvation” together, each of which made it onto the album (and also “Magic,” which will appear on the deluxe version.) END_OF_DOCUMENT_TOKEN_TO_BE_REPLACED