We have another rarity for you guys! Something we were thrilled to discover quite a while ago and just couldn’t wait any longer to share with you. Did you know that there was a special release of the Forever For Now album for the Japanese territory, with a bonus track? 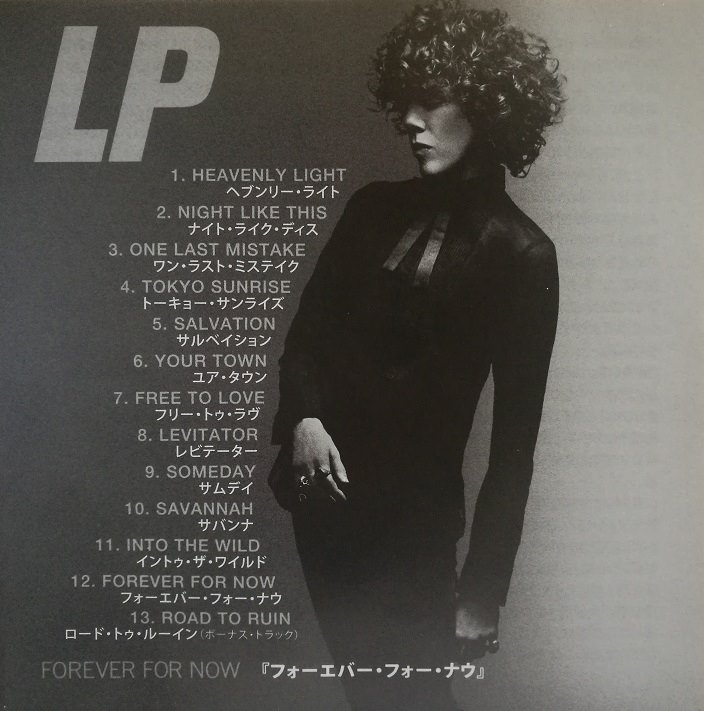 You may already know this song from live performances. It’s called “Road To Ruin” and it was included as the 13th song on the Japanese version of the album. According to info on Wikipedia, LP wrote “Road To Ruin” together with Isa Summers, but we couldn’t cross-check it with any other source, so we’re not sure if that’s correct. For some reason, the Japanese booklet includes a long list of credits for this song apart from the most important one: who LP wrote it with. From other credits that are listed there, we can learn that the song was recorded at Lightning Sound Studios and East West Studios (both located in CA) and that it was produced by Rob Cavallo (of course). And, apparently, the guitar part for this song was played by Tim Pierce and… Joe Walsh!

Reportedly LP regretted the song didn’t make it into the “standard” version of the album. And indeed – its character is pretty much in line with the Forever For Now sound. It’s also catchy, with beautiful guitars and drums. Lyrically, it brings the atmosphere of a journey and something inevitable waiting along the way. But before it happens, there are still some chances ahead. And some choices to be made, too. Production-wise, LP’s voice hasn’t been altered too much compared to most of the other songs recorded for this album. Still, just as with almost every track there, the song itself has been thoroughly polished. But we’ll talk some other time about that issue.

The full song is not available online, but we have for you a snippet from one of the Japanese pages. The song’s pace is perfectly matched its title – one feels like jumping into the car, putting the radio on, and heading somewhere, say, Mexico…

Good news – it’s still possible to buy the Japanese edition for a reasonable price (Amazon, eBay, etc.) if you’d like to have it. Important: the photo we’re posting here are not photos of the cover of the Japanese edition, it’s a photo off of a booklet you’ll find inside the CD. As for the cover, it’s pretty much the same as the standard version, but there may be some Japanese stickers put on it.

✶ There are also three live versions of this song available online. LP played “Road To Ruin” between Sep 23-26, 2014, in Californian clubs: The Observatory (Santa Ana), Casbah (San Diego) and Roxy Theatre (Los Angeles). Here’s  the playlist so you can watch them all.

✶ Isa Summers – Isabella Summers, aka Isa Machine; an English songwriter and music producer. A member of Florence and the Machine. She’s also LP’s friend. They wrote “Someday” and “Forever For Now” together, among other songs.

✶ Rob Cavallo – American record producer, musician and chairman of Warner Brothers Records, multiple Grammy award winner. He worked with Green Day, Eric Clapton, the Dave Matthews Band, Black Sabath, Phil Collins and others. In 2011, LP was introduced to him after Jeff Fenster, a vicepresident of Warner Bros., saw her performance in the Soho House club. She sang “Someday” there, you can see this absolutely amazing performance described here on LP PLeasures (posted Jan 18, 2017). Rob Cavallo was in awe of LP and became an instant, huge fan. He signed her to Warner Bros. and decided to produce LP’s record, Forever For Now (2014).

✶ Joe Walsh – legendary guitarist, American singer-songwriter, composer, multi-instrumentalist and record producer. Most famous for being a member of The Eagles. His guitar in “Hotel California,” which is in fact an interplay between him and Don Felder, has been named one of best guitar solos of all time. Interestingly, LP wrote a song for him, titled “Hi-Roller Baby,” which appeared on his album, Analog Man (2012).

Back to Other Pleasures
... or maybe:

The conversation has a bunch of stronger accents, like LP’s dementi about the way she wrote Rihanna’s “Cheers” (just listen to her: “When I write songs on the ukulele, they’re for MYSELF”) and her views on her songs being artist songs. And her American friends not really getting what happened to her in Europe  END_OF_DOCUMENT_TOKEN_TO_BE_REPLACED

So, “Black Dog.” After watching “LOY” and “No Witness” at Jools, followed by ITV’s “LOY” again and “Halo” we were, like, “…ok, how about watching a little ‘Black Dog’ by her?” So we did. And after we saw it, we knew it’s something to write about as our next material for you.  END_OF_DOCUMENT_TOKEN_TO_BE_REPLACED

And it wouldn’t hurt to loosen up every now and then. Cher is Cher, and she’s fabulous. Whenever the conversation leads up to her, that’s the ultimate conclusion. Come on, not every single thing you put on has to carry this straightforward arty vibe, right? END_OF_DOCUMENT_TOKEN_TO_BE_REPLACED