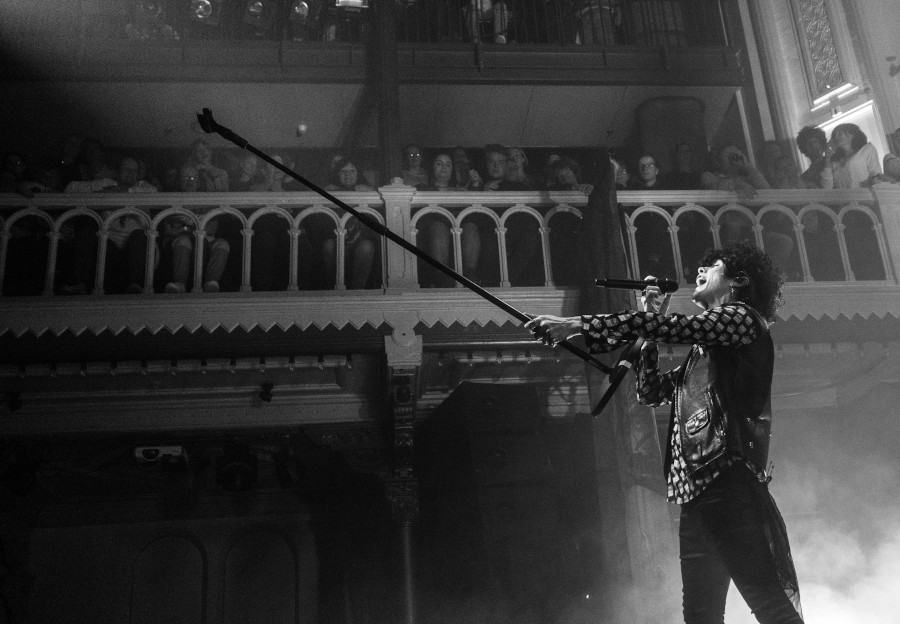 LP in Amsterdam © Sam (IG: showbizsyndrome), courtesy of the author

Above all, “Dreamcatcher” demands one’s undivided attention and can’t stand indifference. And we love it for that. But we’d never believe it would be the song which’d shake us up the most during the Heart To Mouth tour. On the album, “Dreamcatcher” puts you in this anxious, uneasy state of mind (for the night is dark and full of terrors). And, of course, we kind of presumed LP was going to give it a similar treatment on tour, because how else, right? Well, that wasn’t what happened, not at all. Because sung live, it actually is a song which brings you to your knees. Correction: not the song, but LP’s performance brings you to your knees. She always had some amazing show openers – well, “Muddy Waters” to begin with, then “Up Against Me,” then “Strange” – but with “Dreamcatcher” she just burns the place to the ground in wildfire. No survivors.

There is something that Tibetan monks, African shamans and other spiritual guides have known very well for thousands of years – music not only evokes emotions and stimulates intellect, but also goes beyond heart and mind and can very physically, very palpably interact with the human body. Sure it doesn’t happen often, but when it does, it’s so overwhelming, to observe your body reacting to the music in its own way, beyond your control. Shivers, goosebumps, the rush of blood, the change in your heartbeat, and all the other things you kind of sense but can’t put your finger on. So, when LP plays in a venue like Paradiso in Amsterdam, the place being an old church transformed into a modern temple of music, this is when all this becomes your own reality. Never mind the faith thing for now – but the walls of Paradiso were built with huge respect and awareness of how to leverage that sonic ascendancy. Just imagine what happened to that Paradiso crowd when LP, in extraordinary vocal form, entered the stage and started singing “Dreamcatcher.” Fucking hell… It was heaven, no shit.

With the first distinctive sound of the guitar riff, when LP approaches the mic stand and reaches out her hand for the first line of “Suspicion,” this is when she completely possesses the audience’s attention. Yet, although she’s there, present, she reaches out as though somewhere else. LP’s vocals gently float above the crowd and go somewhere beyond the room’s walls. Yeah, with the exquisiteness of the song – we mean it, always. And in this regard, without hesitation, we’d put “Suspicion” right up next to “Tokyo Sunrise” and “One Night In The Sun.” So damn finely written, in every aspect – lyrically, melodically, conceptually. Feels like it was meant to be, born out of hand as a whole composition. And, funny thing. It’s not about how LP performed “Suspicion” in Zurich. It’s just because she did. From the very beginning, every single time we’ve heard it live, it’s been performed by LP flawlessly, just as she put it on the record. We called it a masterpiece two years ago, and we’re calling it a masterpiece today. The performance in Zurich left us speechless and implicitly moved, just as every single one before that had done.

The whole fucking thing. There – we said it.

There was something in the air in Antwerp. Some uncommon intensity that reached its zenith during the four minutes of “One Night In The Sun.” Our favorite part of LP’s charisma are her silences. Her pauses. When she just stops for a second. It’s not a stop stop, most of the time. Usually, it’s a promise. In Antwerp, LP with “One Night In The Sun” called a halt to things. She opened the story with a calm and poised ukulele intro. Several seconds into the song and it felt as though she’d chosen it for the night’s capstone. Each string, touched with cool precision, carried a strong and distinctive sound. And what LP followed with, in the verses, was more like a recitation, and since there is no obvious storyline in the song’s verses (ah, poetry!), then – yes – we were offered a melo-recitation with a grasping ukulele background and remarkable electric guitar licks on top of that. What was coming next was a breathtaking chorus, which resonated so much more, exactly because LP toned down the first verse to almost a whisper. Ah, that emotional tide that rolled over the crowd! And no wonder, what else if not amplitudes are the elixir of life? Doesn’t she know it…

The setting sun was shining through the frame of the stage and the girls’ long hair as LP arrived to say “Hey Nice To Know Ya.” By that time the atmosphere at the very back of the crowd had developed something a little hippie about it; people were dancing ecstatically or just standing with their eyes closed, wearing whimsical smiles. The stills from Woodstock came alive in front of us, although nobody seemed to be high on anything but the show. The first verse of “Hey Nice To Know Ya” subsided upon this very mood. The woods surrounding the venue were echoing the lyrics and seemed to woo LP and pray for more. But how possibly could she when her hands are tied – she holds the ukulele, and her legs are tied too – she needs to stay close to the mic stand. There was a moment, early on in this tour, when we thought – why do it this way, why not just throw away the constraints and run free with this mighty song? Turns out, that’s the beauty of it. And it seems like one brilliant metaphor. Is it? No idea. But “Hey Nice To Know Ya” from Vilnius got us. It really did.

LP’s vocals. We think we’ve never managed to actually do them justice, whenever we’ve tried to write anything about them.

And it gets worse, because each year LP’s voice becomes more and more powerful, deep, skilled, you name it. And your every attempt to describe it very clearly puts you in a position of a literary wannabe, so you just keep deleting, keep backtracking, just to be drawn in to try again. So, what do we have here? Let’s see… No, no guts to share it after all.

When we first saw it, we were in awe for a couple of reasons. But truth be told, we’re not really sure how to write about this performance and not fall into a very bad writing trap, because some things are simply better off without any commentary or description. But, well, this performance is just too good. So this is just a light touch, nothing else would fit.  END_OF_DOCUMENT_TOKEN_TO_BE_REPLACED

And so, we’re taking you back to the summer of 2016 and LP’s European radio promo tour once again. We must be missing the sun or something. Or perhaps it’s Italy we miss. Well, anyway, on July 26th LP visited Rai Radio, only a month after her previous performance there, the occasion when she sang the exceptional version of “Strange.”  END_OF_DOCUMENT_TOKEN_TO_BE_REPLACED

“No Witness” is a bit like a sip of vodka, offered up by a splendid, rapacious stranger on a slow night train from Lviv to Odessa. Or perhaps a street cut drug. You are not sure what’s safer – to go for it or refuse the invitation. And you somehow feel that the choice is only some rhetorical issue, for your fate has already been decided: you’ll be rendered blind or end up in some kind of paradise.  END_OF_DOCUMENT_TOKEN_TO_BE_REPLACED