Supposedly, today should be all about rainbows and puppies. But, actually, how about a dance love song LP co-wrote and featured her vocals in? Here it is: the Cazzette’s song, “Solo Para Ti,” ft. LP. 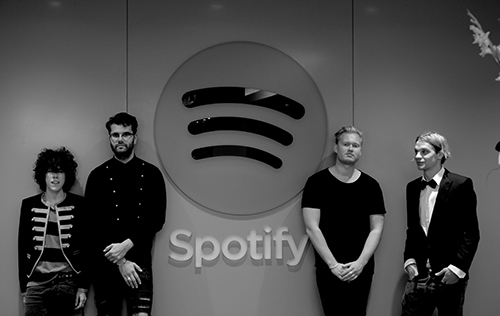 LP and Cazzette teamed up in a studio in Los Angeles and they wrote “Solo Para Ti” in one day. The line “Solo para ti” is in Spanish and means “Only for you.” At first, they wanted to use some French phrase, but it wasn’t quite right and the second idea was to use some Spanish in the song, which worked perfectly. When the duo was asked which part of the work they enjoyed most while creating the EP, they pointed out that particular day:

A favorite moment would be writing ‘Solo Para Ti’ with LP in Los Angeles. We really clicked and the track is very special to us.

LP was really fun to work with, but that’s actually the only song that we made in the same room. We had a really good time working with her, she’s so funny. She really makes me laugh. It was almost like a comedy show in the studio. She’s very charming.

“Solo Para Ti” is very old school inspired. Actually, when you think about it, a lot of tracks on the EP have inspiration from classic electronic music.

The song was released in the summer of 2015, and soon after Candid Magazine wrote in a review: “Down tempo ‘Solo Para Ti’ features vocals from LP, and is reminiscent of nineties dance, but it somehow fits in within the grumbling bass lines and electro beat of its counterparts.”

There is more – a live version of the song was recorded at Spotify’s New York City studio, and it features live vocals by LP! The session was also released in 2015.

The feeling that Cazzette and LP wanted to conjure in this song was “Michael Corleone from Godfather goes to Ibiza for a party.” And yes, we see it quite vividly. Happy Valentine’s Day!

✶ The interview with Cazzette, where they comment on writing “Solo Para Ti” with LP

The interview happened on February 11th of 2018, between two of LP’s San Francisco dates from her Winter American Tour. The questions start-off from LP’s private life and go through her then-upcoming Coachella show, then on to her European success, and the “Greek Guy” set of events. While most of that seems like a quite standard list of topics, it’s the way that the conversation went around each of them that really set the uneasy mood of this interview. END_OF_DOCUMENT_TOKEN_TO_BE_REPLACED

When the reply comes, we just look at each other and smile. “Are you ok to travel to Camden Town?” Of all places in London, Yoshi suggests Camden. So now it’s certain – the magic is going to happen again.  END_OF_DOCUMENT_TOKEN_TO_BE_REPLACED

Zu: Same here! What’s more is I was surprised to discover this cohesiveness, as prior to the release of Heart To Mouth, LP was describing the album in her interviews as eclectic and being kind of a collection of songs which simply sound good together. And they really do, but it’s just a little too humble of a description, wouldn’t you say? There’s much more to the full body of work that Heart To Mouth is.  END_OF_DOCUMENT_TOKEN_TO_BE_REPLACED