We love coming back to mid-2016, to those first delights when Europe was enraptured with LP’s music. It was kind of a transition time for her and her audience – and some beautiful, small and big, things happened around that time. And one of them, a tiny one but how absolutely wonderful, was a performance from LP’s European promo, which she was doing in the summer of 2016. While visiting Italy, she appeared in Rai Radio studio in Rome, and performed a one-off version of “Strange.” 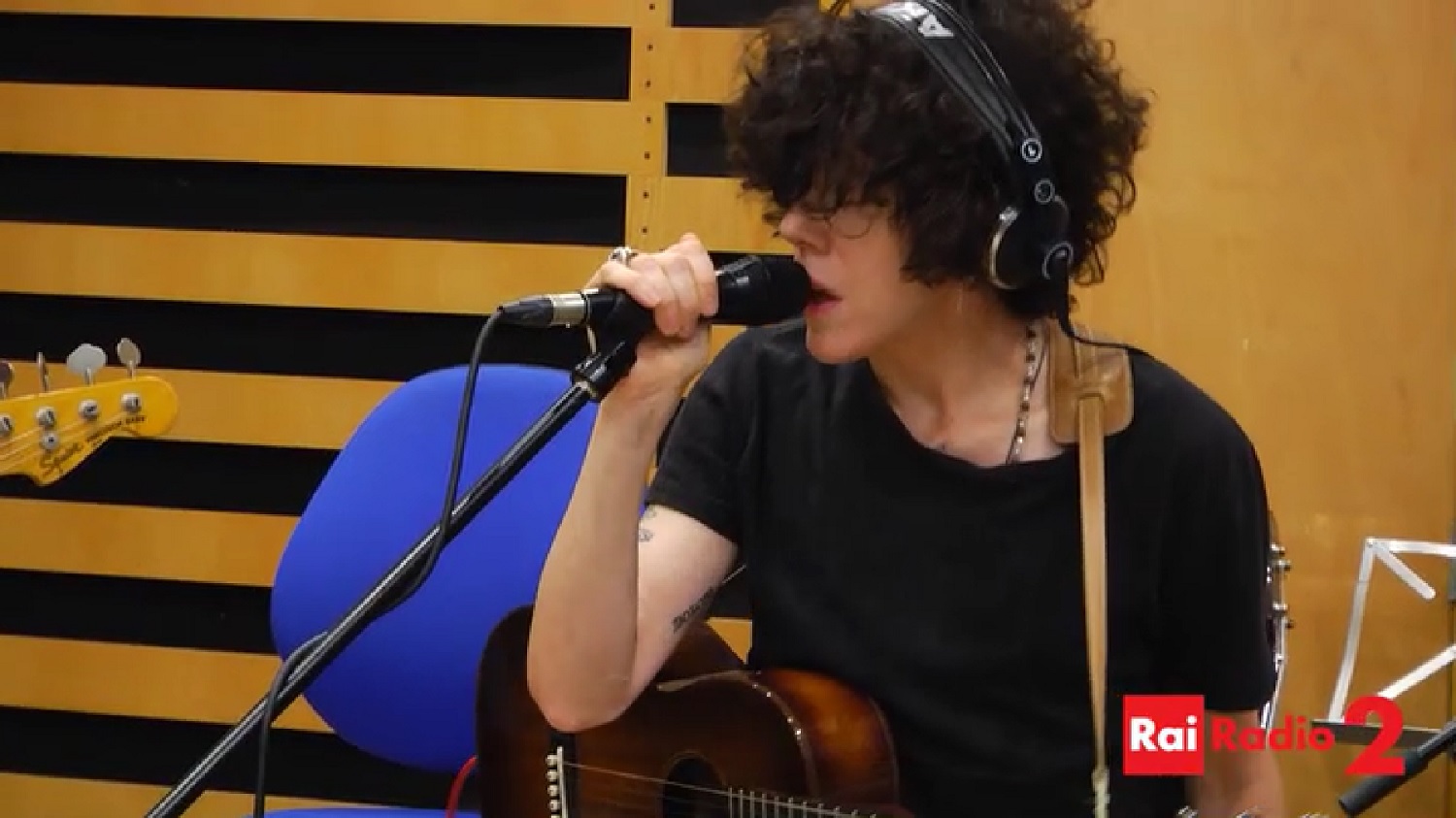 The program was recorded exactly one day before the release of LP’s stark and brilliant EP, Death Valley. It was the very beginning of her spectacular success in Europe (in Greece “Lost On You” had been already #1 for weeks but it would be awarded a platinum there three months later, in September). Soon, LP’s calendar would be fully booked, and her extensive touring through Europe and the US would continue almost incessantly for another year.

LP sang “Strange” in the Rai Radio studio with an unusual set-up, which makes this performance a sparkler! She played with Trevor Menear, her then-guitarist, but a treat here is that they were accompanied by three other musicians: Stefano Cenci (keys), Meki Marturano (drums) and Emanuele Ciampichetti (bass), members of the Radio’s Social Band who join invited artists during the show to play with them. As risky as it sounds, we were really surprised with how well it turned out! But in fact, the video is a rarity for a couple of other reasons too, and so we feel it’s truly precious and just couldn’t resist giving it a closer look.

What catches the attention right away is that LP played the guitar, which has happened only a few times for “Strange,” and only in 2016. Thanks to this, the arrangement became more spacious and intense and you can hear it right away, in the very first seconds. Back then, she used to play her small Martin, whose sound was a bit sharper compared to her newer guitars. So when the song begins, she just plays the guitar, focused and attentive. In these big headphones she appears even tinier than usual and, looking at her, you wouldn’t really expect the thing which happens next – she starts singing in her high operatic voice so flawlessly that the host literally gasps. At the same moment she’s joined by the keys and drums, but LP’s vocals outshine the whole arrangement and you notice the instruments no earlier than during the first verse. And so she takes you through it, singing that everything’s going to be just fine, until she arrives at the pre-chorus in which her voice flies high again. This is the moment when the audience can’t resist any longer and gives her their first ovation during the performance, which she takes with surprise and a grin. And then there’s the second verse, in which Trevor’s melodic guitar becomes clearly audible, the keys are much more pronounced, and in general the song swings you just unbelievably. Throughout her performance, LP precisely measures off the distance between herself and the mic, and it’s different for every part of the song, in order to achieve the best sound for this kind of studio. You can’t really decide whether to close your eyes and just surrender to the music (oh, she does sing heavenly), or maybe not to, so as not to lose any visual element of this beautiful performance. Then LP takes her harmonica for the song’s finale and here’s when she gets her second applause from the audience… Before yet another one, when the song finally comes to its end. (Italy, we love you.)

Is there any other recommendation needed?

✶ The performance was recorded in Rome, Italy, on June 16th, 2016 during the Social Club show by Rai Radio 2.

✶ LP wrote “Strange” with her songwriting dream team: Mike Del Rio and Nate Campany.  And as word has it, recently LP, Mike and Nate have teamed up again to write songs for LP’s upcoming album.

✶ Mike Del Rio – an LA-based musician, producer and songwriter, originally from New York. Together with Crista Ru, he is part of the alternative group, POWERS (and POWERS are THE BEST, just listen to “Man On The Moon” and “Just Kids”, do it now!) As a producer, he worked with Christina Aguilera, Eminem and Kylie Minogue, among others. He is the executive producer of the Lost On You album and, together with LP, he co-wrote “Muddy Waters,” “No Witness,” “Strange,” “Lost On You,” “Tightrope,” “You Want It All,” “When We’re High” and “Long Way To Go To Die.” Before that, they wrote “Night Like This” for the Forever For Now album.

✶ Nate Campany – an LA-based songwriter. He has worked with such artists as Christina Aguilera, Tove Lo and Adam Lambert. Together with LP, he wrote “Night Like This,” “Strange,” “Lost On You,” “Other People,” “When We’re High,” “Switchblade,” and “Suspicion.”

It’s so refreshing to listen to some challenging pop song from time to time. Something that stings your synapses a bit, leads you out of your musical comfort zone and straight into the wild. “The Beautiful People,” as sung by Christina Aguilera, kind of does that. END_OF_DOCUMENT_TOKEN_TO_BE_REPLACED

The Sofar Sounds performance instantly reminded us of yet another rendition of “When We’re High” that left us speechless. Interestingly, that other one was so very different when it comes to the vibe. It was a backstage thing that took place during the Hangout Festival, and was meant to be just a simple, casual set up of only an interview with a couple of songs sung in between questions and stories.  END_OF_DOCUMENT_TOKEN_TO_BE_REPLACED

Watching LP there is a real treat, ‘cause we get to see a real chameleon – she enters the stage totally laid-back, joking with the crowd, then she becomes focused and serious during the interview, to come back to a relaxed and cheerful mood for the rest of the show. It’s easy to spot her “I feel at home here” aura, as she’s talking a lot in between songs without the risk of not being understood.  END_OF_DOCUMENT_TOKEN_TO_BE_REPLACED