Freeze frame, if you please: this year, vocally, LP has been better than ever. Tour after tour after tour – first the US, then Russia, then Europe, then the festival season – she’s been delivering dozens of unbelievable, jaw dropping shows. Yeah, she’s done it before, but the songs have never been so demanding, with all their impressively difficult vocal parts and their badass finesse. Not to mention that the setlists have never been so long. And this year, not only has LP been nailing everything she set out to do, but, in the big picture, we understand that she’s actually designed a whole new artistic and emotional landscape for her audience. And a damned fancy one. 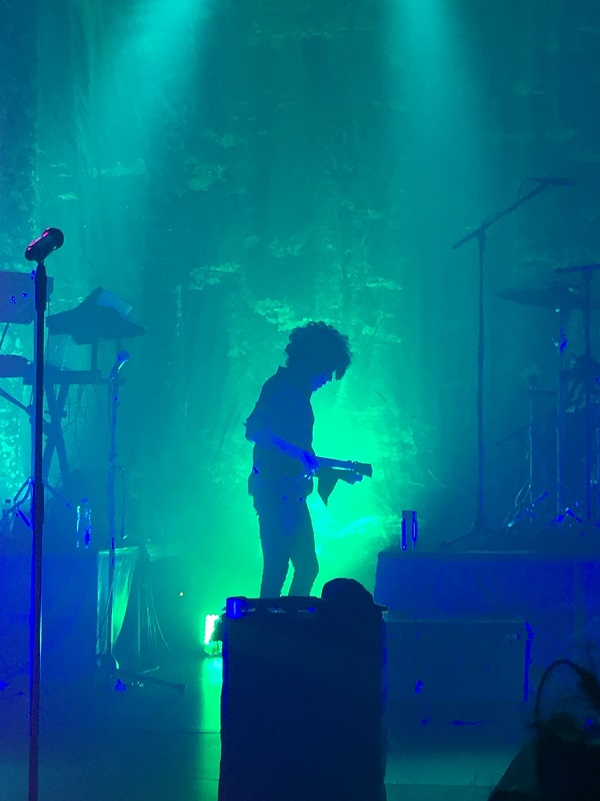 LP in Brussels © Christina (IG: anitsirch), courtesy of the author

This has all been stunning, and particularly because of one thing – as a singer and performer, LP really doesn’t have to prove anything to anybody. We couldn’t imagine there would be any expectation for her to outdo herself yet again. At this level of artistic mastery, that would simply be wrong. At this level of artistic mastery, you just shut up and enjoy.

And so we did, in May, in Brussels. We got ourselves a glass of whatever the club had behind the bar (Bombay Sapphire had to do), and stood in the very last row, just behind the FOH console, inhaling the vibe of the crowd, all tense and waiting for the show. La Madeleine was sold out that night. The room was literally full, the bartenders were being kept busy, you could hear people chattering away in all possible languages. The sound crew next to us was all set and ready, fiddling with what seemed to be customized sound equipment, with the LP logo all over it. As for the two of us, we were there to see our first LP show since the breathtaking Heart To Mouth had been released half a year earlier. There was a rush of blood.

And this was also a night when the word respect would echo throughout the room.

Usually, when something scary and unexpected happens, you basically have two choices. You can cancel the thing and leave. (Shit happens. Highest forces. Sorry.) Or you can close your eyes for a second, take a deep breath and head to the place where you’re expected. Even when you already know that the set up is going to be fucking weird. And you just… do your best. It helps if you’re LP, of course, and if the situation requires singing, ’cause you’re going to kill it.

And so, towards the very end of the set in La Madeleine, the sound died twice. Two blackouts, two long breaks interrupting the show. We can only imagine what happens in an artist’s and their crew’s heads in such moments. (What do the fifteen hundred people standing in front of the stage think, what are they gonna do, and exactly how fucked are we?) But – huh. Nobody left the venue. The exit door behind our backs didn’t open even once. Some people took the opportunity to refill their glasses at the bar, others just waited, some talked in low voices. There was no impatience or disappointment in the air. Nobody wanted to return to the everyday world.

As LP had already played the majority of the songs from her setlist, she could have just left it there, easily. But she decided to take her ukelele and her guitarist, Alex Feder, back on stage and – yes – go acoustic.

Witnessing this moment was all the more emotional, because the more produced LP’s shows get, the less space remains for spontaneity and improvisation. And it is true, sometimes we do long for the rawness of the early European shows, a couple of years back, when LP used to tune her guitars on stage, telling stories between moments, when the setlists used to change with each show, which altogether made each experience completely different. There was something deeply intimate in those low-key gigs. But quid pro quo, really. It was this year in Birmingham when we saw the best of all LP’s shows. And it is true that the new production highlights the most powerful elements of LP’s performance, giving her more tools to enrapture her crowds. It also allows her to put so many songs on the setlist. Things evolve, and so they should, but, ah, it was thrilling to see the show stripped down in La Madeleine, left with the essence of it all – that voice and these beautiful songs.

And so, Brussels was treated to an improvised, acoustic “Muddy Waters,” “Into The Wild,” “Switchblade,” and “Lost On You.” It’s not exactly like LP and Alex had had a lot of opportunity to practice these songs in such arrangement before. But, man, do they know what they’re doing. Two musicians just going for it, for better or for worse – playing music live, vibing with the crowd, basically nailing it. So precious.

Knowing how stressful the blackout must have been to the artist, it’s a little embarrassing to admit that we are actually very grateful it happened, and now the recordings of that acoustic treat are our little guilty pleasures… So, we’ll just wrap it up here. Play it, Sam.

✶ This show took place in La Madeleine in Brussels on May 4th, 2019

While you may think that you already know these songs too well, keep in mind that the sound quality during Spotify Sessions is spectacular,  and also, LP commented on each song a bit with her characteristic swag. END_OF_DOCUMENT_TOKEN_TO_BE_REPLACED

AMG: Do you have any strange of funny stories from the road?
LP: We were in the backwoods in this random, random Starbucks and then Montell Jordan said ‘hi’ to me. The girl he was with said she liked my shoes. If that’s not awesome, I don’t know what is. I don’t know, there’s a lot of things that happen on the road that can’t be spoken of. The road is like Vegas. Things happen.  END_OF_DOCUMENT_TOKEN_TO_BE_REPLACED

She talked to us a lot from the stage and we tried to capture as much as possible from the different videos recorded during the show. END_OF_DOCUMENT_TOKEN_TO_BE_REPLACED