There are songs that stick in your head like bubble gum to a sneaker. You know the feeling, once you’ve heard them, you can be sure that for the upcoming days and weeks your life is going to be all about them. This is exactly what happened to us back in May, when The Kooks released “Broken Vow,” written with LP, who also did ad libs for it and so you can hear her exuberant backing vocals throughout most of the song. 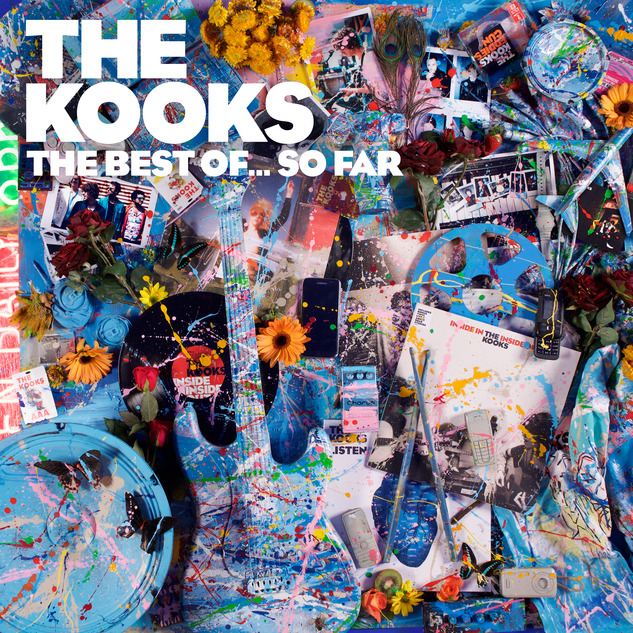 The artwork for The Kooks album, The Best Of… So Far

“Broken Vow” has a powerful beat and is definitely catchy, but LP’s vocals give an additional boost to its energy. Each line she sings starts off like a machine gun volley, so mighty, maybe even aggressive, and it gets even more explicit towards the end of the song. The astonishing rock-meets-opera ad libs get stronger and stronger until they fully shine in the last chorus. It’s been our daily treat since we heard it for the first time. To think it wouldn’t have happened if LP hadn’t gone to a certain strip bar in LA one casual day.

Well, she did, and so did the band’s frontman, Luke Pritchard. They both have curly hair and look “slightly dylanesque,” but also out of sheer coincidence they were wearing the same shoes that day, as he told The Indievidualist. When LP and Luke noticed that, they decided they simply had to be best mates! What did happen for sure is they actually got together to write a song, and, as Luke remembers it: “It was really cool, she had some time, came in and she’s actually in the track!” He also explained what “Broken Vow” is about:

The song is all about a catholic school girl, out on the weekends… I went to a catholic school and I think she [LP] went, too. We talked about our memories, about how religion sometimes is oppression and people go the other way – they rebel. It’s mid-tempo, slower than most Kooks songs, real American.

In another interview, given to NME.com, he said a bit more about it:

I was playing around with the idea of a catholic school girl who’s gone bad. For me, the inspiration [for the lyrics] is the hypocrisy of the whole system – when people believe so much in God, and yet they do things that are so very ungodly. I remember they put me in detention, because every Thursday you’d have to go to church and give money. I remember saying, ‘”Well, you taught us that Jesus said you don’t have to go to a priest to reach God, but now you’re telling us to do that. I don’t get it.’”They were like, “You’re going to detention!”

While still work in progress, “Broken Vow” started out like a blues song, but then gained a powerful beat. The bass player, Peter Denton, mentioned that the song is fun to play live, because it is so different from what they usually write and perform. The song was released on The Best Of… So Far, which is a typical greatest hits album, with two new tracks, one of them being “Broken Vow.” Different journalists asked The Kooks why those tracks more closely resemble their sound on the first two albums than anything they’ve put out recently. They said that it was a deliberate step. Talking to Danny Angove, the band explained:

It was definitely thought out; we really wanted to do something that would complement The Best Of… album, so we went back to three chords and some ‘da da da’s and just took it from there, really! It was definitely a conscious decision, though. It was what we wanted for that release.

And, as for us, we’re definitely no Britpop fans, but we’re surprisingly okay with the not-that-britpop-sound of The Kooks, and we simply can’t get enough of “Broken Vow.” Actually, we’re going to play us some Kooks right now. You?

✶ “Broken Vow” has been written by Luke Pritchard, Chris Seefried, Brandon Friesen and LP. Brandon Friesen produced, mixed and recorded the track. The song was included as the last track on The Kooks’, The Best Of… So Far, album released in May, 2017, via Virgin and Astralwerks.

✶ The Kooks are a British pop rock band formed in 2004. The band was signed to Virgin Records just three months after forming and got worldwide recognition in 2006 with their debut album, Inside In/Inside Out. In the UK alone the record sold over 1 million copies. The Kooks’ biggest hit remains “Naïve,” the fourth single from their debut record.

✶ The interview with The Kooks by Indievidualist

✶ The interview with Luke Pritchard by NME

Or, often, we read… Oh, we love us a good written LP interview from time to time. And this BMI interview we have here is really well done, and it’s all about songwriting, so how could we possibly resist. LP is really generous in sharing insights about her craft here. END_OF_DOCUMENT_TOKEN_TO_BE_REPLACED

Charlotte OC’s story in the music business is no fairy tale. In 2008, at the age of eighteen, she got signed to a major label, Columbia Records, which initially wanted to release at least four albums by her. But the deal didn’t work out and she was dropped.  END_OF_DOCUMENT_TOKEN_TO_BE_REPLACED

But back to “All I Want” and LP’s take on it. It’s no surprise that we love it – LP is an emotional singer and performer, hence the second verse of “All I Want,” that she got to sing, was a perfect choice for her. Especially as for all the lyrical lines, the four she sang were not only the most interesting, but also the most moving. END_OF_DOCUMENT_TOKEN_TO_BE_REPLACED