Asking rhetorical questions can sometimes have some unexpected consequences. Like last time, when we made the rhetorical conjecture: “btw, an article about her mic-approaching methods would be too much, wouldn’t it?” Some teasing mechanism got triggered, apparently, and demanded its fair share. And here we are, thinking about just that. So yes, it would be too much, but if it were used as an ignition tool – perhaps nothing better. And so… the most memorable of LP’s mic-approaching moments, for us, would be what happened last May, late at night, on the Jimmy Fallon show. 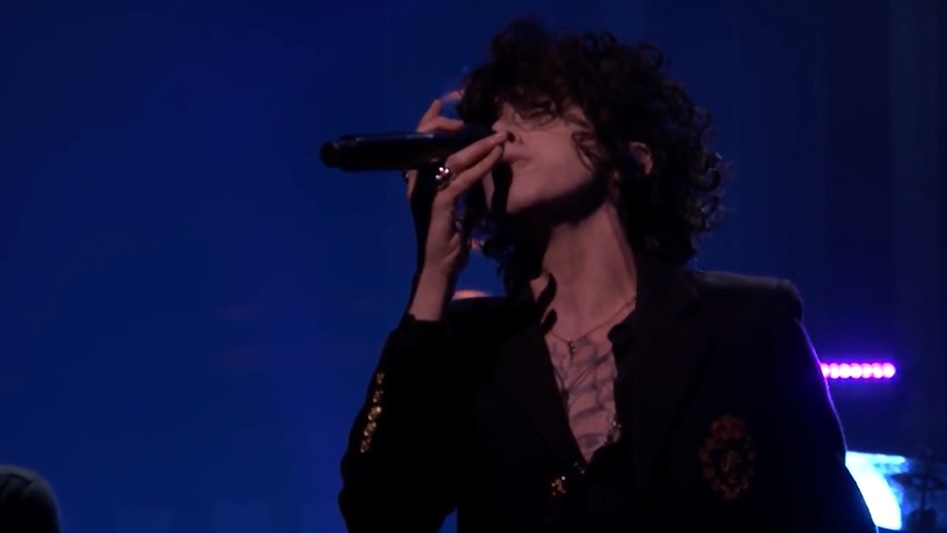 Still frame from the video of LP performing on Jimmy Fallon

To be perfectly honest, the beginning of May 2017 was definitely not a time when we were expecting any surprises from LP. It was – we thought – her two week break between having just concluded her European tour and the opening of her, much anticipated, American tour. So, it was quite interesting to find out that she was going to be featured on three major American late night shows in the course of one week. How splendid!

The live performances, as recorded for television, sure have their own poetry. As there is only one relevant member of the audience – the eye of the camera. For whatever reason, be it her previous TV experiences, be it some kind of an instinct – that night, May 3rd of 2017, in the NBC studios, LP fucking knew it and she nailed it. We couldn’t believe our eyes. We honestly couldn’t. It somehow wouldn’t click in our heads that, right after this big European tour, she managed to sing “Lost On You” that intimately, like during one of her radio promo performances in mid-2016, but in an even more intense way. And to this day it is one of the smoothest, sexiest and darkest things that we have ever seen from her  onstage. Starting from that walk up to the mic, which kind of defined the ambience of the performance, and ending with a most elegant and somewhat brooding vocal sign-off, this has become one of the quintessential LP performances.

And the song, “Lost On You.” Tons of questions asked about the song by journalists, about the background, the success. Everything has been written about it, and yet, when you play the video of LP performing on Jimmy Fallon, you feel as if there has been nothing said about it at all. Because when you see a performance like this, whatever has ever been put into words about the song and LP’s performances, falls apart.

For it is to be felt, not understood or said, and you need to connect to this something that she’s created then and there. Or rather, you have to connect to what she created in you by saying what she had to say. And this, just this, is important, because this is what happened to you – this sudden evocation. Maybe this was an amazingly emotional performance, maybe she overdid herself yet again in terms of her dark, sharp, piercing vocals, her hypnotizing gestures and her silhouette, all immersed in that message. But it was all to do something to you, in you. So just press play, and see…

✶ TV shows which LP participated in between April and May 2017:

The last two summers, or perhaps even three, LP spent playing mostly in Europe, but before “Lost On You” landed on the European charts in 2016, she had spent a couple of her summers playing a whole range of different American festivals and events. END_OF_DOCUMENT_TOKEN_TO_BE_REPLACED

The interview happened on February 11th of 2018, between two of LP’s San Francisco dates from her Winter American Tour. The questions start-off from LP’s private life and go through her then-upcoming Coachella show, then on to her European success, and the “Greek Guy” set of events. While most of that seems like a quite standard list of topics, it’s the way that the conversation went around each of them that really set the uneasy mood of this interview. END_OF_DOCUMENT_TOKEN_TO_BE_REPLACED

The spring of 2017 was such a busy time for LP; she was in the crossfire of two major tours, her European and American respectively, with three prestigious American late night TV shows squeezed in between them, as well as the premiere of the US edition of her Lost On You album on top of it all. Our guess is that the conversation with Maiya Sicklin took place around LP’s tour-closing show in Koko Camden, back in late April.  END_OF_DOCUMENT_TOKEN_TO_BE_REPLACED