One beautiful day a few years ago a Brooklyn-based duo, Ex Cops, of the singer-songwriter, Amalie Bruun, and the vocalist-instrumentalist-writer, Brian Harding invited LP to write and sing a couple of lines on their song, “Wanna Be.” And she did. Her part is short, but what an intense, deep vocal she layed for it! 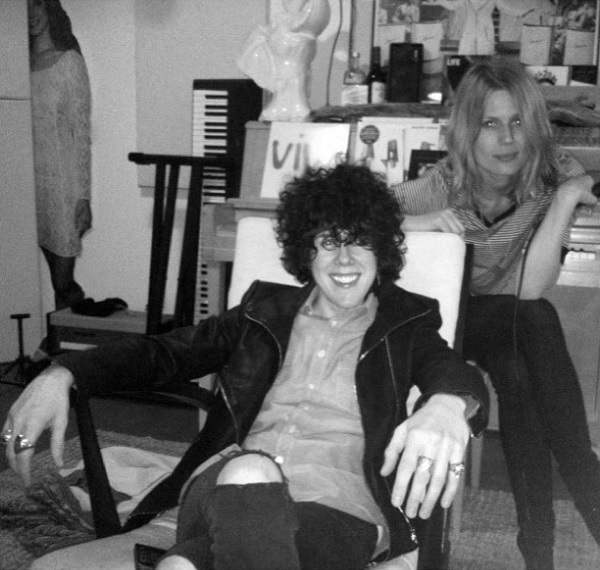 Ex Cops’ music is full of contradictions. Sugary vocals mixed with non-random lyrics, the synth-driven sound is vintage yet modern, danceable yet contemplative, pop yet indie. It is reminiscent of various mainstream bands from the 70s, 80s and 90s. Those influences are obvious and there’s no surprise to read what they told to Interview Magazine: “Two of our favorite albums are The White Album by the Beatles (1968) and Michael Jackson’s, Dangerous (1991).”

As for the song “Wanna Be” ft. LP, it’s definitely a track that stands out and, to us, it’s the best composition from the albums’ tracklist. LP’s part is a bit like a stirring melo-recitation, something between singing softly and speaking passionately. There is a nice depth in LP’s interpretation of the lines:

Femmemusic.com described the song as “a love song about the love that sneaks up on you.” The duo was enthusiastic about having worked with LP. They mentioned her in various interviews, always referring to her as “so cool.” In one of them, given to A Music Blog, Yea?, Ex Cops briefly described the writing process of Daggers:

A Music Blog, Yea?: I’ve interviewed her before and she’s great.

Okay, check out how wonderful, exactly.

✶ “Wanna Be” – a song written by Brian Harding, Justin Raisen, Daniel Nigro, Amalie Bruun and LP. It was released on the Ex Cops’ album, Daggers, in 2014.

✶ Ex Cops is a Brooklyn-based duo of the singer-songwriter, Amalie Bruun , and the vocalist-instrumentalist-writer, Brian Harding. The band formed in 2011 and made its debut in 2013 with the album, True Hallucinations. Their second album, Daggers, was released one year later by Downtown Records. It was produced by Billy Corgan (vocalist and guitarist for Smashing Pumpkins) and Justin Raisen.

✶ The interview with Ex Cops for A Music Blog Yea?, where Amalie Bruun comments about writing with LP

While you may think that you already know these songs too well, keep in mind that the sound quality during Spotify Sessions is spectacular,  and also, LP commented on each song a bit with her characteristic swag. END_OF_DOCUMENT_TOKEN_TO_BE_REPLACED

The event took place on May 14th, 2012, at the Museum’s Clive Davis Theater. It was ticketed, so if you had $15, you could be there.  Being the GRAMMY’s event, the occasion was quite classy and so was the musical set up. And it’s another chance to see and hear LP perform live, with Joey Dosik accompanying her on the piano and Nick Rosen playing the string bass. That’s not all, there’s also violin, so let us just put a full stop here, you know. END_OF_DOCUMENT_TOKEN_TO_BE_REPLACED

To be perfectly honest, the beginning of May 2017 was definitely not a time when we were expecting any surprises from LP. It was – we thought – her two week break between having just concluded her European tour and the opening of her, much anticipated, American tour. END_OF_DOCUMENT_TOKEN_TO_BE_REPLACED